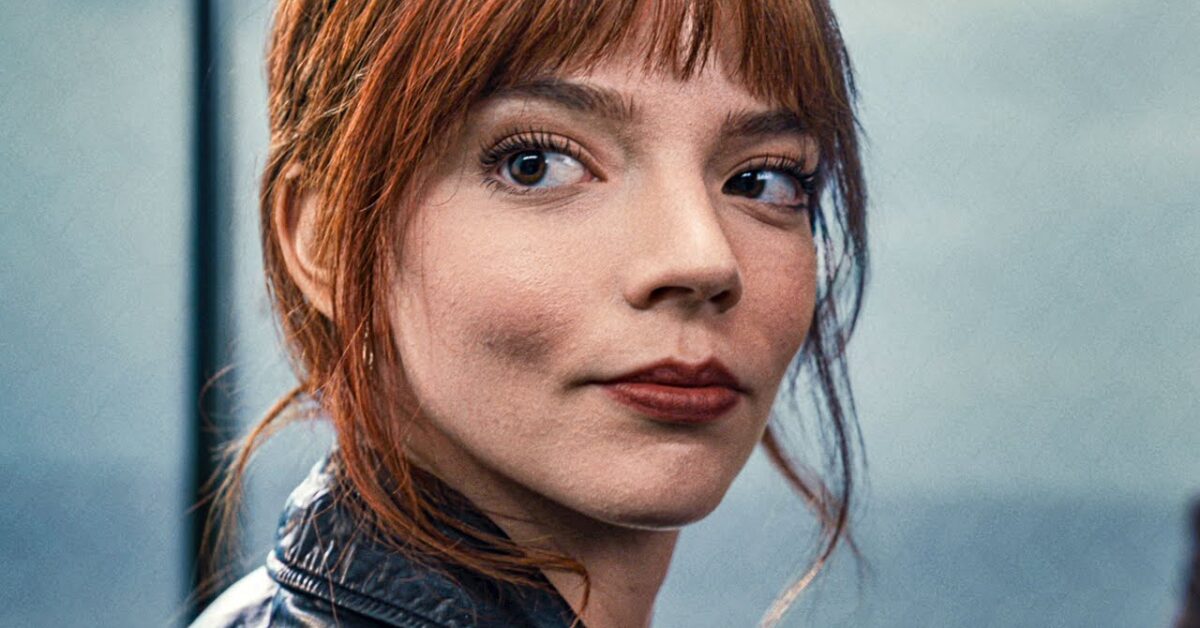 The Menudirected by Mark Mylod, in cinemas from November 17, 2022 distributed by Searchlight Pictures, is one of the films that is making the most of itself. It is one of the most anticipated films of the year, and which marks the return of Mylod to the big screen after more than 10 years, following a great success on the small screen, from the famous Game of thrones to the timeless Shameless up to the beloved Succession. Presented at the 17th Rome Film Fest, The Menu is an original film, suspended between thriller and satire, a horror-tinged dark comedy with a cast that includes Anya Taylor-Joy, Ralph Fiennes, Nicholas Hoult, John Leguizamo and many others.

The story starts from a group of people on their way to one of the best restaurants in the world, managed by the renowned Julian Slowik, specialized in molecular gastronomy and ready to offer his demanding guests an unforgettable culinary experience. In the center of The Menu the 12 guests, in particular the character of Margot, the only one not expected at that dinner, added as a substitute for the ex-girlfriend of her companion Tyler. In fact, Margot will be the first to feel uncomfortable, to show suspicions towards that unique and disturbing dinner. The dinner will prove to be a terrifying obstacle course towards an already written destiny: no one will survive and in the hours preceding an atrocious death the 12 guests will see dreams and certainties collapse, forced to reveal themselves for who they are, to face weaknesses that humiliate them, in a game of massacre from which only Margot will be able to save herself. A satire on the world of food, the world’s finest palates, gourmet cuisine and social differences makes di The Menu one of the best films of 2022. Now let’s see some curiosities about the making, development and where the screenwriters come from Seth Reiss, Will Tracy and director Mark Mylod took inspiration.

1. Emma Stone instead of Anya Taylor-Joy

Initially, when the first news about the film came out, The Menu was to have as protagonist and heroine of the story, Emma Stone, the American actress born in 1988 and winner of the Academy Award for La La Land in 2017. She was then replaced by the American actress with British citizenship Anya Taylor-Joy, born in 1996, one of the most requested interpreters of the moment. However, this is not the only change that the film has undergone. First directed by The Menu had in fact been entrusted to Alexander Paynewho has directed films including Election, Sideways – Traveling with Jackwhich earned him the Oscar for screenplay and Bitter heavenalong with many others.

2. The Menu And Succession

The Menu it’s not the first film that focuses on a dinner that Mark Mylod works on and it’s not even the first collaboration with Tracy. To quote the acclaimed SuccessionMylod, among the 12 episodes of the HBO show, also directed an episode, written by Tracy, almost entirely set during a dinner party, just like The Menu. Mark Mylod later stated that he took inspiration for that episode from the film Gosford Parkdirected by Robert Altmanominated for 7 Academy Awards, winning the one for Best Screenplay. The film also won a Golden Globe for Best Director and two BAFTAs for Best British Film for Best Costume Design. Mylod stated that Gosford Park it was also crucial for The Menu.

A few days after the release of The Menu, John Leguizamo he said he was inspired by the actor Steven Seagal to play the character of George Diaz, a fading action star. Calling Seagal a point of reference, Leguizamo, during an interview with Entertainment Weekly, stated that he considers him “a horrible man” adding having met him and remembering the experience as bad. “I’ve met a lot of stars like this, even before they became failures. I had a bad meeting with Seagal. We made a film together in 1966, Executive Decision and I can tell that he is a bad person“, were the words of Leguizamo which obviously made the rounds of the web in a short time.

For the making of The Menu and in particular for the courses that make up the dinner, she was contacted Dominique Crenn, one of the greatest French chefs in the world, owner of Atelier Crenn, in San Francisco and the only woman in the United States to have 3 Michelin stars. Crenn has always defined herself as an artist referring to her kitchen as a true “culinary poetry“. Along with Crenn, also the partner and executive chef Juan Contreas participated in the making of the film, cooking all the dishes that appear in The Menu, working closely with a food stylist. “Dominique Crenn was instrumental in this project. She’s an incredible, world-famous chef and her dishes are fantastic from an artistic point of view but also have an emotional warmth. We wanted chef Slowik’s creations to be cold, beautiful, but also lifeless“said Mark Mylod. The producer Adam McKay he added: “The greatest contribution that Dominque Creen has offered us has been to help us understand the functioning of the dynamics of race, gender and the relationship that is created between worker and employer within all professional kitchens“.

One of the strengths of The Menu it lies precisely in the staging, on which Mylod has particularly focused. All the actors were in fact always present on the set, shooting their scene with their partner, such as Anya Taylor-Joy and Nicholas Hoult, or John Legeuizamo and Aimee Carrero, at the table and, if they weren’t involved in the following scenes, they watched the filming of the other actors. Mylod also gave the actors a large amount of improvisation by shooting with two cameras filming simultaneously. Each sequence was thus filmed from multiple angles and did not need to be repeated several times. This made the scenes much more fluid and full of realism in the surreal setting of the entire film. “Working on this film was a bit like attending an acting class“said John Leguizamo. “For example, when Reed and Judith were shooting their scenes, all of us actors were on set watching and then clapping. Then it was Paul and Janet’s turn, who shot their scene while we watched them and then it was our turn. It was amazing“.

6. The symbolism of The Menu

Filmed in Georgia, the island where it is set The Menu it’s called Hawthorn, hawthorn in English, it is the first link between the world of Slowik and nature. Mylod and the set designer Ethan Tobman have created a set that could vaguely resemble a church, complete with a cross on the back wall, thus giving that importance, that power and that cult idea typical of the dishes and their realization in The Menu. Even the locked door, which can be seen several times, in contrast with the window overlooking the landscape, is a clear reference to a place from which it is impossible to escape, but where the instinct to flee will become predominant, as it actually does. In particular, Tobman was inspired by the film for the door The exterminating angelfrom 1962, directed by Luis Bunuel. The kitchen is full of elements, people and furniture, while the diners’ room makes each table distant, away from the others, in its own right, an almost empty environment with minimalist furnishings. The stone wall in the scene where Margot goes to the bathroom to smoke was built in stone, it is rough and underlines the contrast between natural and artificial, ancient and modern, simple and gourmet.

The production took inspiration, above all for the environments, from some of the most famous restaurants, in particular the Danish Noma of René Redzepithe American Alinea of Grant Achatzthe Catalan El Bulli of Ferran Adria and the Swedish, currently closed, Fäviken, of Magnus Nilsson. The figure of Grant Achatz was also central to the interpretation of Ralph Fiennes. The actor didn’t rely on a single chef, but along with Mylod, Fiennes watched numerous episodes of Chef’s Table including the one that talks about Achatz and his Alinea in Chicago, with 3 Michelin stars, and one of the greatest exponents of molecular cuisine, just like the character of Slowik.

8. The soundtrack made in the kitchen

The composer Colin Stetson, during an interview with Collider, told how the creation of the soundtrack took place, declaring that some of the percussion present throughout the film is nothing more than the sound of pots, pans and kitchen utensils. Many sound sources were assembled by banging these instruments together in a rhythmic way, like plates, glasses or something spilled on the floor. These are small sounds that make up a fair amount of the soundtrack The Menu.

During his honeymoon in Bergen, Norway, screenwriter Will Tracy, always a foodie, tried in every way to dine at the Cornelius Sjømatrestaurant, a luxury restaurant accessible by boat being located on an island. The meal would last a long time and consist of 5 courses. Although it was only 30 minutes from the mainland, when Will Tracy saw the boat pull away from the dock and leave them there, he remembers thinking: “We’re stuck here for four hours. What if something goes wrong?“. Distracted by delicious dishes, the anxiety of being somehow far away and alone on the small island has generated a certain amount of fear. Will Tracy then wanted to share and make perceptible the feeling of panic he had that evening, imagining a macabre turn. This is how, back in the United States, and telling Seth Reiss about the experience, the two started working on the screenplay, already imagining Ralph Fiennes in the role of a perverse chef.

Even the shocking ending of The Menuwhich arrived, according to Mylod, in progress, has a connection with Chef’s Table and with Grant Achatz. “In the episode dedicated to the Alinea, a dessert made of meringues and chocolate is presented during the opening credits, which was then disassembled and all the ingredients are thus crushed on the table“said Mark Mylod”I’ve tried to find a way to do the same thing and give the same idea inside a restaurant“.