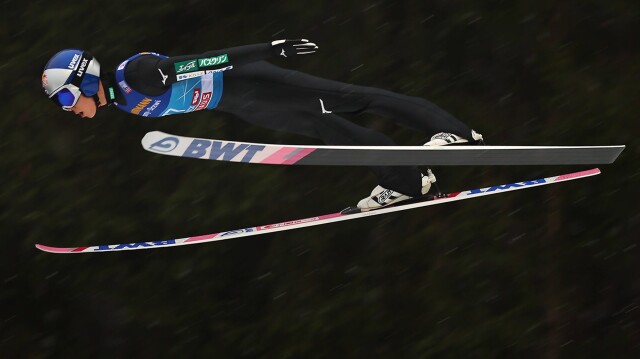 Nothing in the third installment of this year’s 4-Hills-Tournament resembled what the fans know from previous years. Due to strong winds that made it impossible to play the competition in Innsbruck, the competition was moved to Bischofshofen. Fortunately, the weather also changed here and the jumpers could finally compete in good and similar conditions for all. The only obstacle was the heavy snowfall.

Another novelty for Polish fans was the absence of Kamil Stoch, who played in the 4-Hills-Tournament continuously since the 2005/2006 season. The three-time winner of the event and the defender of the last year’s trophy this season is a shadow of himself. After failing to qualify for the competition, which was originally to be held in Innsbruck, Stoch was withdrawn from the competition and returned to Poland.

Four Poles in the competition

So there were only five White-Reds left in Austria, four of whom qualified for the first competition in Bischofshofen.

The first to appear on the starting bar was Paweł Wąsek, competing in tandem with the Swiss Kilian Peier. The Pole jumped 127.5 m, slightly shorter and worse than his rival’s jump. He lost in a direct fight, but waited for a long promotion among the “lucky losers”.

He was pushed out of him by his representative colleague Piotr Żyła, who also lost the direct competition in the first round. An Austrian Ulrich Wohlgenannt jumped one and a half meters from Żyła, which landed at 130 meters, but the Pole’s result gave him a good chance of advancing to the final round.

Luck of the Free, bad luck of TCS revelations

Jakub Wolny was a bit more lucky, whose jump was far from ideal (only 124 meters), but was promoted by the Slovenian Żak Mogel. The substitute for Cene Prevca, who withdrew from the 4-Hills-Tournament after the second competition, broke his attempt and only reached 101.5 m.

Lovro Kos can speak of great bad luck. The Slovenian jumper, who was third in the general classification before the environmental competition, showed one of his longer jumps (136 m) in the first round, but he lost his balance on landing and fell to the landing hill. Although he was promoted to the second series, he suffered large points losses, which meant he had to say goodbye to his hopes on the podium in the event.

Dawid Kubacki, competing with Daniel Andre Tandem, competed in one of the last pairs. For a moment it seemed that the Pole’s 128.5 m was a bit too little to think about a performance in the second round. But the third in qualifying Norwegian landed three meters closer and thus ended his participation in the competition.

So three White and Reds advanced to the second series, but all of them were in the third ten. The highest, 23rd place, was “the lucky loser” Żyła, two points lower was Kubacki, and with the 29th result, Free was classified.

Rivals? Out of reach. Suffice it to say that the best in the first series of Norwegian Marius Lindvik Żyła was 23.5 points away. The winner of the two previous competitions and the leader of the 4-Hills-Tournament, Japanese Ryoyu Kobayashi was second after the first jump, losing 5.7 points to the leader. Halvor Egner Granerud was third.

A passionate fight for victory

The Poles in the second series played in supporting roles, although their jumps mostly looked slightly better than in the first series. Wolny improved his result by one meter, and Kubacki – by three meters. Żyła flashed with exceptional regularity and repeated his result from the first attempt.

With the exception of Wolny, who lost one place after the second jump, the other two Poles improved their results. Kubacki moved up to the 21st position, and Żyła was finally three places higher.

The big question was whether Lindvik would end Kobayashi’s dream of winning the competition for the third time in a row at this year’s 4-Hills-Tournament.

The Japanese did not have an easy task, wanting to make up for his almost 6-point loss to Lindvik, who jumped phenomenally in Bischofshofen. He fought brilliantly, jumping half a meter farther than in the first round despite a shorter inrun and unfavorable wind.

And for Lindvik, that was enough. The Norwegian had a shorter jump, and on landing he sat too low, which was reflected in his notes. From the advantage of 5.7 points there was a loss of 4.7 m.

Kobayashi came close to the second Grand Slam career in the 4-Hills-Tournament.

Granerud retained the third place after the second round.

David Martin is the lead editor for Spark Chronicles. David has been working as a freelance journalist.
Previous QR code scanners at ING branches. The clients do not hide their indignation
Next Mummies of children in the Catacombs of Sicily. What secrets do they hide?