The history of Cinema is full of films set, even if only for small parts, on the waters; be it a river, a lake or the ocean. And often the boats featured in these films, for their beauty and / or grandeur, have managed to steal the show. Young and old, yachts and sailing; here are the 4 unforgettable …

The Cinema has chosen water as its natural habitat; from rivers to oceans, passing through lakes. Often the films, throughout the history of the seventh art, have been shot on board boats; and of boats of any kind, from luxurious yachts to simple sailboats, from mammoth cruise ships to the smallest and most rigged do-it-yourself life rafts. From “L’Atalante” by Jean Vigo in 1934, to “The Queen of Africa” in ’54 with Humphrey Bogart, up to the last episode of the 007 saga; the boats have managed to cut themselves a role of prime importance in their films, and in the whole of cinema, often stealing the scene of the entire “show”, making history and characters / actors pass into the background.

In short, there have been many and varied appearances of different models of boats in the cinema; many have made history, while others have turned out to be very forgettable and have already been closed in Hollywood oblivion. But which are the most beautiful and fascinating boats that have lent their prestige to the world of cinema? Here is a list of the 4 unforgettable boats protagonists of great films!

Boats in the Cinema: the best 4

A small and essential list of the best boats used in the history of cinema. A collection of boats, more or less modern; successful and exclusive yachts and sailboats. The name of a character, and of his famous and interminable saga, is destined to repeat itself twice; two out of four stations, in fact, are reserved for the “least secret” secret agent in the world. The other two slots, on the other hand, are occupied by a super exclusive yacht with an alternative design and by an ancient schooner, later refurbished, which appeared in multiple films. In short, Boats in the Cinema: here are the best 4 … 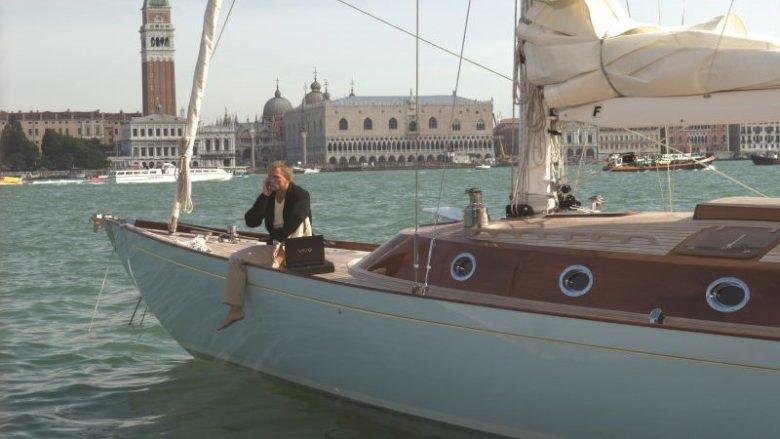 Without a shadow of a doubt it was also his luxury and super exclusive vehicles that made the image, and the ego, of “Bond, James Bond” great; from his classic and alternative Aston Martin DB5 to the boats he used. Here we are talking about a jewel of British craftsmanship, the boat used for the filming of “Casino Royale“, 21st episode of the 007 saga released in cinemas around the world in 2006.

The boat in question is called Spirit 54; a hand-built sailing yacht in the British shipyard in Suffolk; the boat then underwent numerous “removals” around the world due to the filming of the film. Her most famous appearance is when she transports lovers Daniel Craig (007) ed Eva Green (Vesper Lynd) around the waters of the Venetian canals, before the confusing and tragic finale. During the processing of the film, the boat was disassembled 10 times in order to pass under the various bridges of La Serenissima; she thus becoming the first sailing boat to go up the Grand Canal in 300 years. The collaboration between James Bond and Spirit Yachts is renewed. This time, however, we talk about Spirit 46 and her appearance in “No Time To Die“, Film of 2021 and last episode of the saga conceived by Ian Fleming. A very elegant and super refined sailboat, always handcrafted and built by hand, used to accompany Bond (or rather his interpreter Daniel Craig) towards his due and much deserved retirement.

“The Spirit 46 – he said Sean McMillian, CEO of Spirit Yachts – is one of Spirit Yachts’ original designs and an example of the level of craftsmanship and attention to detail found in every yacht at the yard. I think this boat suits Bond’s character very well, it combines beauty and functionality ”.

Collaboration with a patriotic taste; English character and exclusively British boatsas McMillian himself reminds us, who continues: “The James Bond saga is a pillar of British culture, and we are honored to be able to continue this collaboration with such an iconic ‘brand'”. The only word that can best describe this exclusive and luxury yacht is “Dream”. In fact, she continues to appear in the dreams of Tom Lincoln (played by Ewan McGregor) the self-centered designer protagonist, together with his clone, of the film “The Island“, directed by Michael Bay in 2005. A dream, moreover, for its performances and its dimensions; but, above all, for its clean design and its unique and inimitable aesthetic.

A length equal to 36 meters, the three gas turbine engines, which produce 17,000 horsepower and are able to push the hull at more than 60 knots of speed, make this boat one of the best performing yachts ever. A sporty luxury built entirely of fiberglass and carbon, for a purchase price of 22 million euros.

Eye of the Wind, the veteran of Cinema The oldest ship on the list. Eyes of the Wind, in fact, is a schooner built in Germany in 1911, and initially named Friedrich. The boat, after decades of use for commercial purposes, in 1969 suffered a serious fire that made it unusable. Rebuilt after a few years, it passed from owner to owner, underwent numerous restorations and began its career in the world of cinema and television.

This boat, in fact, has appeared in numerous films of various kinds. We can remember “The Blue Lagoon” (perhaps his most iconic work), “White Squall”, “Tai-Pan”, “Nate and Hayes” and the US television series “NOVA”.

David Martin is the lead editor for Spark Chronicles. David has been working as a freelance journalist.
Previous Born intercepts Russian nuclear bombers near Finland, tension is growing for total war
Next the second half begins at 3-1 for the blues