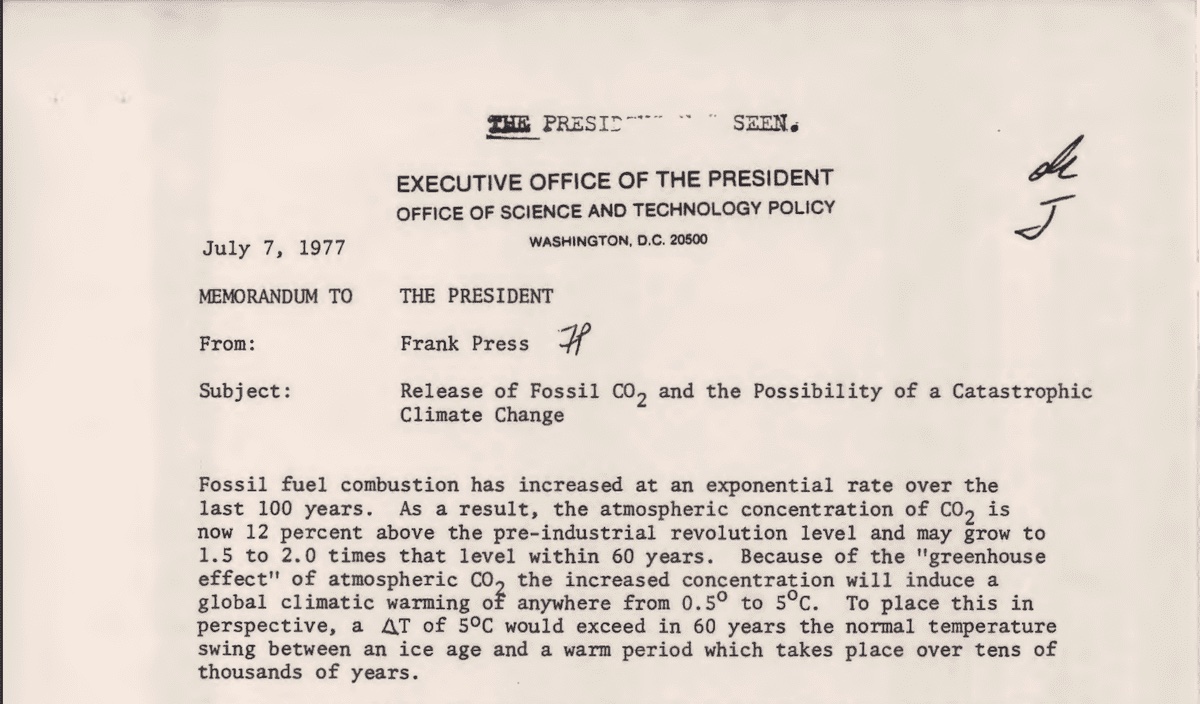 45 years ago, this paper could have saved us from global warming

Awareness of the climate crisis has never been as widespread as today: the scientific community is now unanimous on the anthropogenic origin of global warming, the majority of public opinion is asking for prompt action to counter its effects and civil society has made this name itself battle by actively taking the field through climate strikes, demonstrations and protest actions. At the present stage, the climate change it represents one of the fundamental points of the public debate and of the governments’ agenda; yet, until a few years ago this was not the case.

This was certainly not the case in the second half of the 1970s, when the international environmental movement was still poorly structured and lacking the potential for current pressure. Yet, precisely in those years, well before the clearance of global warming into the mainstream of political discussion, US President Jimmy Carter received a seemingly insignificant piece of paper on his desk which, however, could have changed the course of events, anticipating global efforts to the reduction of emissions. That document, just over 2 thousand typed characters, made its intentions clear right from the title of the object: Release of Fossil CO2 and the Possibility of a Catastrophic Climate Change. It was written by Frank Press, an American geophysicist, advisor to four US presidents and president of the US National Academy of Sciences for two consecutive terms, from 1981-1993. 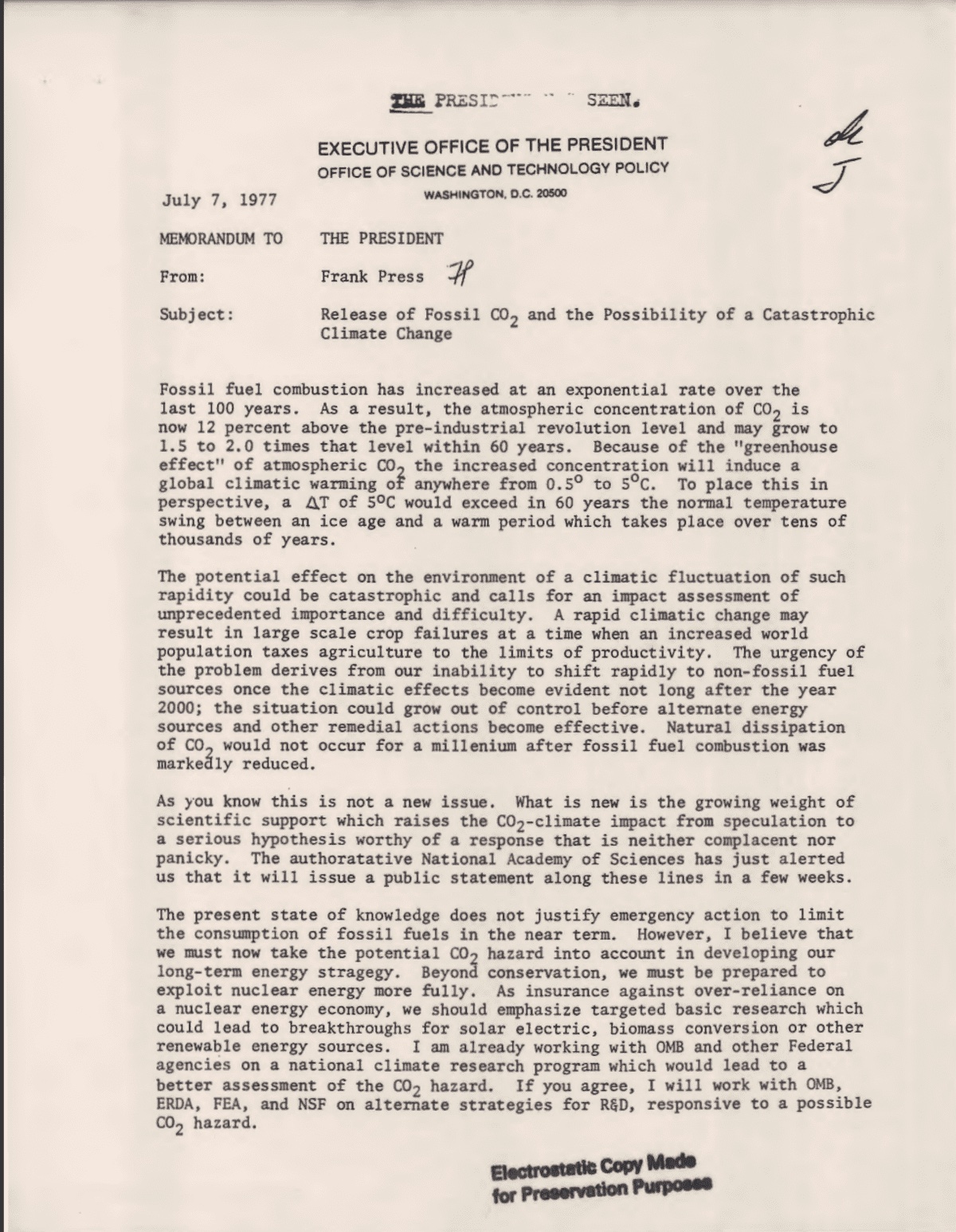 The full version of the Press memorandum. Credits: Office of the President of the United States of America

In that brief memorandum, Press used words so futuristic that he gave the impression of being a prophet who had gone back in time to inform mankind of his sad fate and avert the sixth mass extinction. For example, he wrote that “The combustion of fossil fuels has increased at an exponential rate over the past hundred years. As a result, the atmospheric concentration of CO2 is now 12% above the level of the pre-industrial revolution and may grow 1.5 to 2.0 times that level over the next 60 years. Due to the “greenhouse effect” of atmospheric CO2, the increase in concentration will induce global climatic warming of between 0.5 and 5 ° C “and that the” climatic effects “would” become evident “from 2000 onwards. The geophysicist also stressed the importance of abandoning fossil fuels and the urgency of starting a rational transition to new energy sources as soon as possible (in this case too, Press’s accuracy is disconcerting if we think that, today, the most governments have set up specific ministries tasked with following up on this precise mandate): “With the end of the oil era in sight, we need to make long-term decisions on future energy policies. One lesson we have learned is that the time it takes to transition from one major source to another is several decades. ”

Unfortunately, as you can easily guess, the piece of paper that could have saved us from the catastrophe ended up in the shredder pretty quickly: Carter underestimated the scope of Press’s remarks and the Energy Minister serving in his administration, Jim Schlesinger, dismissed the matter. rather hastily, dismissing it as a secondary issue, as evidenced by his commentary in which he wrote that “My opinion is that the political implications of this problem are still too uncertain to justify presidential involvement and political initiatives.”

Consequently, the “presidential memo“ that could have changed the story of the fight against climate change was thrown away. The story of Press’s prophecy was retraced in detail on the Guardian in an article by Emma Pattee, who launched an interesting provocation: what would have happened if Carter had been re-elected? We could probably have jumped ahead by acting decades in advance in terms of reducing emissions. And, instead, unfortunately things did not go like this: in fact, Carter was followed by the parenthesis of Reagan who, after winning the elections in 1981, demolished the solar panels installed in the White House by his predecessor. Meanwhile, the fossil fuel industry has started spending tens of millions of dollars to sow doubts about climate science. In those years, in fact, the scientists inside the Exxon company had discovered the link between the activity of burning fossil fuels and the increase in emissions. According to the company’s internal documents and memos, Exxon knew everything there was to know to affirm the existence of climate change and admit responsibility. Yet, instead of changing course, he went to great lengths to hide it, building a disinformation campaign that lasted decades.

David Martin is the lead editor for Spark Chronicles. David has been working as a freelance journalist.
Previous Noah Schnapp, interview with the protagonist of Strangers Thinghs
Next Vinicius Jr. has a three-day party on a farm in the mountain region of RJ with Leo Santana, Ludmilla and Thiaguinho