There is no one type of film that makes you cry more than another; in fact, the 8 films that we recommend below are not united by either genre, nationality or even the historical period.

All films, even comedies, can make viewers cry, we think The great war of the master Monicelli: we laugh with laughter but witnessing certain dramatic scenes (and especially at the end) we get a tear.

Below we will see how, through different languages, styles and genres, the various authors manage to arouse that emotional discharge that makes the eyes wet. The first film we recommend is considered by some to be the masterpiece of Luchino Viscontireally higher than The Leopard.

It is a historical-sentimental film with a protagonist Alida Valleysset in Italy in the second half of the nineteenth century, which tells the love story between an Italian nobleman and an Austrian soldier.

The excellent screenplay (taken from the homonymous short story by Camillo Boito) was signed, among many others, by the same Visconti, his assiduous collaborator Suso Cecchi D’Amico and the American playwright Tennessee Williams.

Produced with extensive use of means, it is a melodrama that uses the love story only as a pretext to tell the historical social events of that historical period.

Visconti himself will declare to the magazine Cahiers du cinéma:

“What interested me was to tell about a wrong war, made by only one class and which was a disaster”

In any case, is the first film in which the director chooses to represent the noble and wealthy class instead of the peasant one.

He abandons the misery and poverty (and black and white) that had characterized his first films and creates a work of splendor made up of imposing and colorful sets, in which each shot looks like a painting by Francesco Hayez.

It’s a movie extremely modern, especially in language, despite having more than half a century and was of great inspiration for many directors to come (you can even see similarities in Scorsese’s Age of Innocence).

Visconti’s direction is masterful and tells us, above all through the wise use of scenography and photographythis heartbreaking love story that continues to move us for generations.

At the time the author was criticized for this “detachment” from the neorealist vein of which he is one of the founders, but the film still had a good income and was positioned in the top 10 of that season.

Small curiosity: Francesco Rosi, Giancarlo Zagni and Franco Zeffirelli also participated in the making of the film, at the time all at the beginning of their careers.

The film is available on Raiplay.

It is about a boy who does not know how to choose what is really important for his life but also about a person with a turbulent past who, due to childhood trauma, is afraid to bond with other people and who rejects any attempt by others to approach him.

Fortunately, a psychologist manages to see the fragile boy behind that arrogant bully mask and decides to help him.

It’s a coming-of-age film, the plot lies above all in the sentimental relationships between the characters but, nevertheless, also the plot is far from obvious.

Best Screenplay Oscar (signed by Damon and Affleck) is more than deserved.

All the characters are well characterized but it is the protagonist who everything revolves around.

His name gives the title to the film and it is also the engine and the architect of the evolution of the plot.

Everything is centered on his anxieties and his fear of the world and it is impossible not to empathize with that boy.

In any case, the film remains sweet at the right point and excesses are wisely avoided.

Only at the end will he become aware of what he really wants and will “go on an adventure”.

The film is available on Timvision. 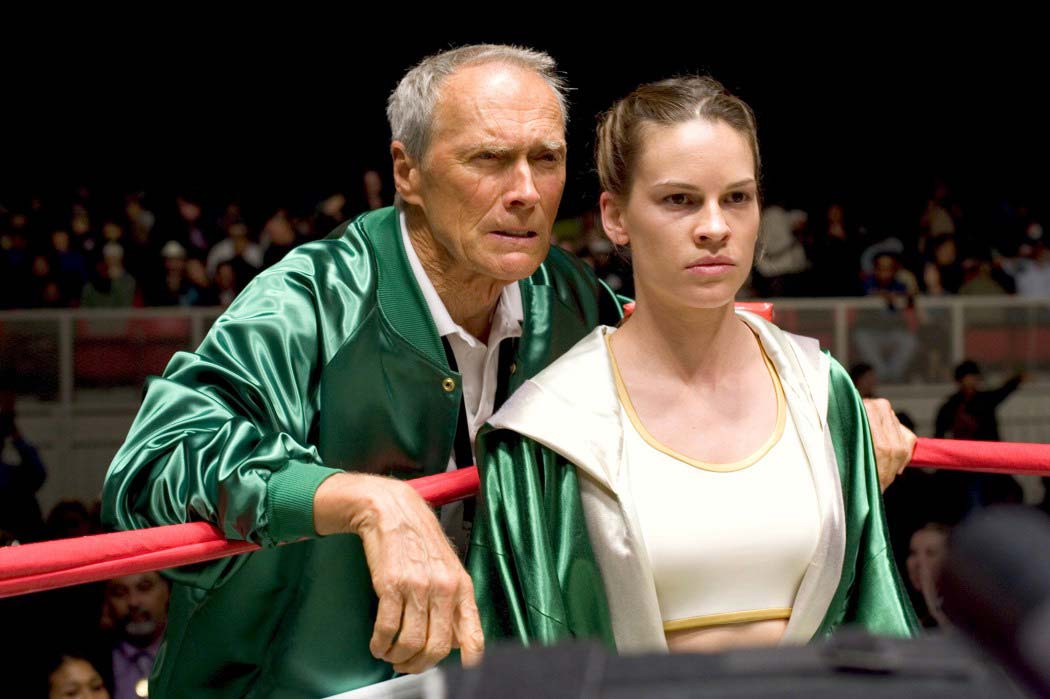 This masterpiece was worth to Clint Eastwood his second Oscar for directing (will win 4 in total, including best movie).

It’s about a female boxer who, not very young anymore, tries to win the world title thanks to a gruff coach.

One step away from the finish tragedy happens (which obviously we do not anticipate).

The first part of the film tells the rise of the champion while the second, more than the decline, tells of his interminable and terrible martyrdom.

It is mostly at the end that the tears begin to flow but more than for what is happening we cry for what could not be achieved.

Clint Eastwood stages a pessimistic work but, at the same time, gives a voice to those who are too often not considered in American cinema: to losers.

There is no winner in this drama, only losers because the challenger in the ring is the most fearful of all: life.

It is the disenchanted story, made up of broken dreams, difficult choices, hope and impossible or unrequited loves.

Although the tragedy is almost complete, the ending is worthy of Shakespeare and, albeit in an unusual way, love triumphs.

Excellent direction, actors and screenplay, as well as photography by Tom Stern (a regular collaborator of the director).

The film is available on Prime video.

The forest of flying daggers

The forest of flying daggers

It is an adventurous historical action film that tells a love triangle between an imperial guard, a rebel and her lover.

Exciting film, made with colorful sets and full of directorial virtuosity (especially in the spectacular action scenes).

As in many of the director’s films it is the sets and costumes that give that “magical” atmosphere to the film but also the action sequences seem, rather than duels with sword, graceful ballets worthy of Roberto Bolle.

Initially, the plot doesn’t seem to have anything special but, in truth, nothing is as it seems and the plot (also signed by the director himself) is made with care and skill and unfolds gradually.

As written above, however, love is the engine of the story and everything else, the war, the duels with swords, the various sides in battle, are not important.

In the end, the question that arises is: will love triumph?

Obviously we do not anticipate anything … but equip yourself with many handkerchiefs.

The film is available on Prime video. It is about a gruff old man who manages to fly his house thanks to a multitude of balloons and who tries to take it to the Paradise Falls, the place where he had always wanted to go with his wife.

The problem is that, as soon as he leaves, he realizes that he has accidentally brought with him, a funny and clumsy Asian boy.

It moves us from the very first scenes, when in a few minutes he tells us the love story between the protagonist and his deceased wife.

More than a film about senility, however, it is a film about lack of paternity and morbid attachment to a past that will never return and that prevents us from moving forward.

Asian boy becomes a surrogate child for the gruff old man and the house to take to the falls represents attachment to the past.

Each scene can be both funny (the gags are brilliant to say the least) but also tender and there is always, deep down, a vein of melancholy and nostalgia.

In the end, the old man will have to choose between the boy and the one who, after all:

The film is available on Disney +

Tell about a couple (Donald Sutherland and Ellen Mirren), she with cancer and he with Alzheimer’s, who start a trip in a camper van across the US to go and see the house of Ernest Hemingway, of which the protagonist was passionate.

Despite the international cast, it is a very Italian film and the direction is signed by none other than by Paolo Virzì.

It’s a swan song, hilarious and without heartbreaking scenes (it doesn’t need that to move) and showcases the loving passion of these two characters who are coming to an end.

Between regrets for mistakes made in the past and the misunderstanding of the children, the film stages the desire to live one last adventure before dying.

It also tells the life of a couple, with its ups and downs, and the desire to stay together until death and beyond.

On its release it was cut short in the US but appreciated in Europe, so much so that it was nominated for the Golden Lion at the Venice Film Festival.

The film is available on Raiplay

Pieces of a Woman

This heartbreaking drama is about the most terrible of grief: the death of a daughter.

A young couple witnesses the death of their baby just out of the womb and is shocked.

It is an almost plotless film: everything is a pretext to stage the metabolization of the tragedy and the gradual return to life.

Each character reacts in his own way but is the protagonist (Vanessa Kirby) to be in the spotlight more than anyone else.

She is the mother who lost her daughter and, albeit silently, she is the one who is suffering more than anyone else.

The direction makes wise use of sequence shotsespecially in the key scenes and especially in the scene of the tragedy and tells us naked and raw for what it is, but stopping at the right time to avoid “freak scenes” that would have trivialized all that amazing orchestration of actors and photography.

Also very effective is the metaphor of the bridge under construction as a symbol of gradual healing and also the ending with the apple tree to symbolize rebirth.

All good co-stars, above all Shia LaBeouf.

The movie is on Netflix

To conclude, let’s talk of the latest masterpiece by Paolo Sorrentino.

Autobiographical tale which stages a family tragedy: a young boy lives a carefree life until tragic death of the parents.

It is a film divided into two parts: Before carefree youth and then the sad “maturation”.

Sorrentino abandons virtuosity (at least in part) to confer on the film an intimate and innocent air and bares himself in front of his audience telling all of himself: strengths, defects, ambitions, loves and hopes.

The change of tone that the Neapolitan master adopts after the tragedy is drastic and it is very noticeable how the film becomes less colorful and also slower.

Undoubtedly, it is a work similar to Amarcord but Sorrentino still manages to tell his story in an intimate, personal and at the same time spectacular way by “borrowing” only a few things from Fellini’s masterpiece, all the rest is his sack’s flour.

Aesthetically it is a perfect film and all the actors are in the right place.

The movie is on Netflix.

David Martin is the lead editor for Spark Chronicles. David has been working as a freelance journalist.
Previous the government decision and the controversy – Corriere.it
Next If you have high cholesterol never eat these foods: LIST