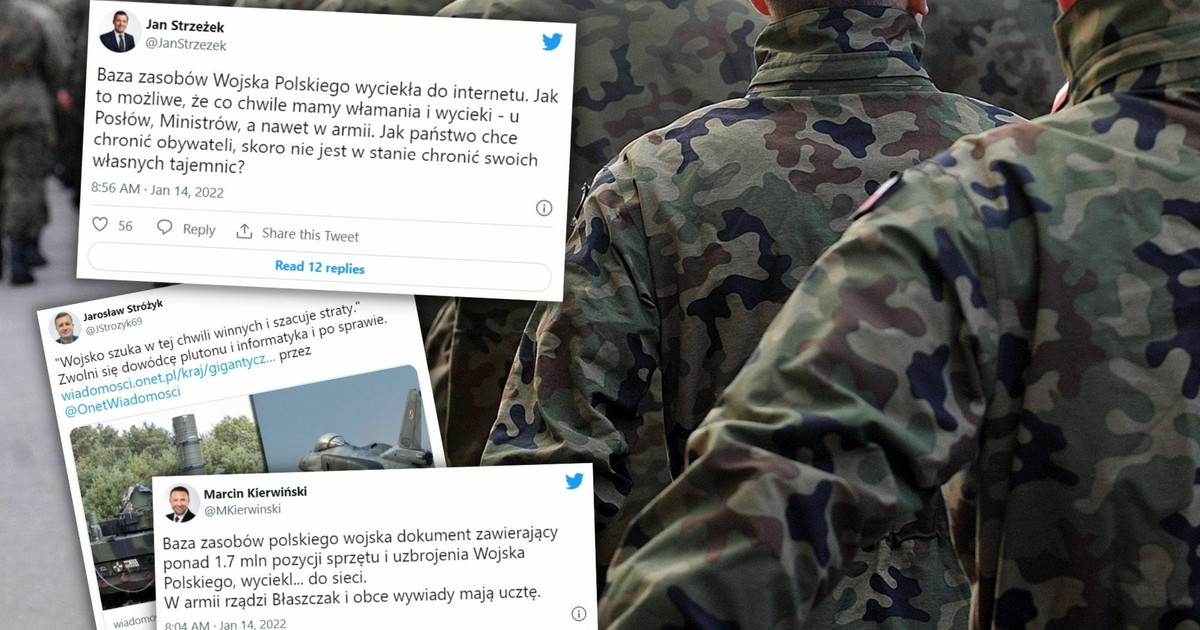 A gigantic data leak from the military. A wave of comments after Onet’s text

The resource base of the Polish army was leaked to the network. Some information is extremely valuable to foreign intelligence services. According to our informant, a cybersecurity specialist, the database has already been downloaded by users from over a dozen countries, including Russia and China. Onet unofficially confirmed the leak in two independent sources related to secret services. The military is currently looking for those to blame and estimating the losses.

The Ministry of National Defense has already referred to the matter, which published a communiqué on its website. “The case is being analyzed in detail by the services. It is being clarified whether there was a leak and whether the disclosed file was actually produced by the Polish Armed Forces.”

In the Sejm, PiS representatives were also asked about the leak. PiS spokeswoman Anita Czerwińska referred to the statement of the Ministry of National Defense and added that there is no information on this matter and the party is waiting for more ministry announcements. MEPs accompanying her at the conference argued that there was no cause for concern. – Demanding his resignation is frivolous. Every reason is good for them (the opposition – ed.) To attack the PiS government – they said.

In turn, the Civic Platform demands the resignation of Minister Mariusz Błaszczak. – Our enemies know from this data what degree of readiness, preparation and ability to conduct actions we have, because all logistics is fully known. It is completely dramatic. It is difficult to imagine all the damage that will result – said Czesław Mroczek from the PO.

On the other hand, Lewica announced that it would submit an application to the Supreme Chamber of Control to conduct an inspection at the Ministry of National Defense. – There is no cover for such matters. We will demand absolute answers, not silent answers that everything is fine – said MP Krzysztof Gawkowski. He added that his party still awaits Minister Mariusz Błaszczak’s statement on this matter.

Our text met with many comments on social media, especially from opposition politicians who strongly criticized the PiS government.

“A gigantic data leak from the army. Over 1.7 million items on the Internet! The entire specification of the Polish army! The data has already been taken over by China and Russia. And what will the Polish state do with it? This is a gigantic threat to the future” – said Cezary, a member of the Civic Coalition Tomczyk.

“Raving about Smolensk, setting benches and building museums of cursed soldiers is the ceiling of their competences. But they can fire experienced officers and stretch them. Psych-right-wing patalachs” – wrote Radosław Sikorski, PO MEP.

Leszek Miller: “» There is everything in the bases, from weapons to panties «. With such a degree of exposure of the army, any underwear is no longer needed. The army is naked and cheerful. The prime minister, deputy prime minister for security, defense minister have already resigned?” .

Joanna Kluzik-Rostkowska, KO: “Considering the threat of a war between Russia and Ukraine, the US is distancing itself from Europe, this is really great news. We are sitting on a powder keg, and the boys and girls from PiS pretend to be in control of the situation. commission “.

“Also the deputy minister and PiS MPs will flee the meeting of the national defense committee when we ask about it?” – asks Tomasz Siemoniak, former head of the Ministry of National Defense and deputy KO.

Marcin Kierwiński, KO: “The resource base of the Polish army, a document containing over 1.7 million items of equipment and weapons of the Polish Army, leaked … into the network. Błaszczak rules in the army and foreign intelligence services have a feast.”

“The resource base of the Polish Army has leaked to the Internet. How is it possible that we have break-ins and leaks every now and then at MPs, Ministers, and even in the army. How does the state want to protect citizens when it is unable to protect its own secrets?” – wonders Jan Strzeżek from the Agreement.

“A data leak from the army. PiS is a threat to Poland’s security,” said Adam Szłapka from Nowoczesna.

“We got up from our knees? No, we’re on our shoulder blades. Everything in this country is lying!” – said Adam Szejnfeld (KO).

“A gigantic data leak from the army is not an accident or stupidity. Even if one man is stupid, procedures and IT systems should prevent it. It is not only the person who downloaded the data that is to blame, but Minister Błaszczak and the General Staff of the Polish Army” – indicated Anita Sowińska from the Left.

The military also responded to the matter. “It started with the dismissal of Director DOIN (Department of Classified Information Protection – ed.), Who drew Antoni Macierewicz’s attention to the disclosure of classified information in the Seym, then it was only worse. Conformist officers get promoted, and the Polish Armed Forces (Armed Forces – ed.) Are losing their capabilities defensive “- these are the words of General Mirosław Różański.

“The platoon commander and the IT specialist will be fired, and that’s it,” says General Jarosław Stróżyk, ironically.

He likes dogs, pizza and popcorn. Already a fanboy of Nintendo and Sony, but today throws anything. He has collaborated on sites and magazines such as GameBlast, Nintendo World, Hero and Portal Pop, but today is dedicated exclusively to Spark Chronicles.
Previous Dissident nun without the habit: Francis’ support for LGBT “ministry” is a “new era” in the Church
Next Dune: Spice Wars is an RTS with 4X elements; Shiro Games introduces the vision of the game