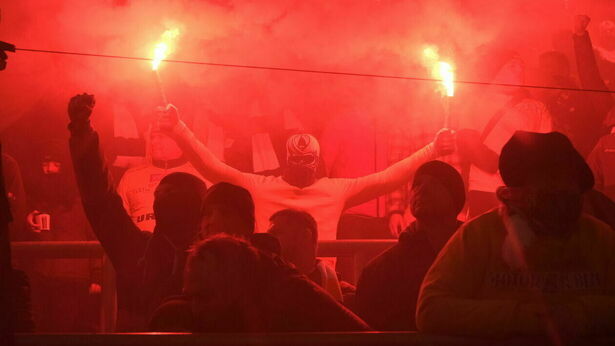 The atmosphere and the setting

For the 17-year-old Włodarczyk it was a premiere hit in the first “Military” team. This season he has already played in the third league reserves and can boast quite good statistics. In 13 appearances, he defeated rival goalkeepers seven times. When he got the chance, he used it right away.

– It was an amazing experience. I felt ready and knew I could help the team. This is a very important victory for us. I won on tough terrain and I still can’t believe I scored a goal. After the game I thanked coach Saganowski.

The coach laughed and asked why did I have to score a goal today? This trainer has helped me a lot in my career. I wish him good luck in his further work

– said Włodarczyk junior after the match.

How do the hosts’ fans rate the game?

– I was attracted to the game by the information that the Polish champion is coming and that there is to be a very large turnout. Certainly, when it comes to the setting, everything was at a very high level. The atmosphere, the chants of fans on both sides, for a moment you could feel like at a very large sports event – says Michał.

Did this match convince him, however, to appear more often in the Arena’s stands during Motors’ matches? – As long as the league does not come to Lublin, it will not – adds Michał.

Another spectator, who earlier this season attended the yellow-white-blue game only once, admits that it was a really interesting spectacle.

This is a completely different setting for the match than with two or three thousand spectators.

The guests filled their sector tightly and their cheering was impressive, it was loud. It seems to me that the fans of Motor could give more in terms of doping. The setting was interesting, although weaker than that in the match against Ruch Chorzów. These vulgar “courtesies” of fans from both sides at the end of the match were not needed. I will be coming back to the Arena for the next Motors games, I believe that they will be able to advance and that next season there will be more opportunities to meet with more recognizable clubs – explains Dominik.

There is only one more league match ahead of the team from Lublin this year. Again, the competition with the reserves of Śląsk Wrocław will be held at the Arena. This time on Sunday at 16.

On the occasion of the great event, which was the match with Legia, we also managed to break the attendance record at Arena Lublin. Let us recall that so far the largest number of viewers at this facility watched the match of the European Under-21 Championship between the national teams of Poland and Slovakia in 2017. Then the turnout was

How many people could have appeared in the stands on Wednesday?

– Due to organizational issues, 14,920 fans will be able to see the maximum match between Motors and Legia from the stands, the club from Lublin informed. And this means that the competition was close to being watched by a complete audience. Ultimately, the turnout was exactly 14,914.

David Martin is the lead editor for Spark Chronicles. David has been working as a freelance journalist.
Previous Keira Knightley with Coronavirus. It feels “nasty”
Next Coronavirus in Poland. Latest infection data [4 grudnia 2021 r.]