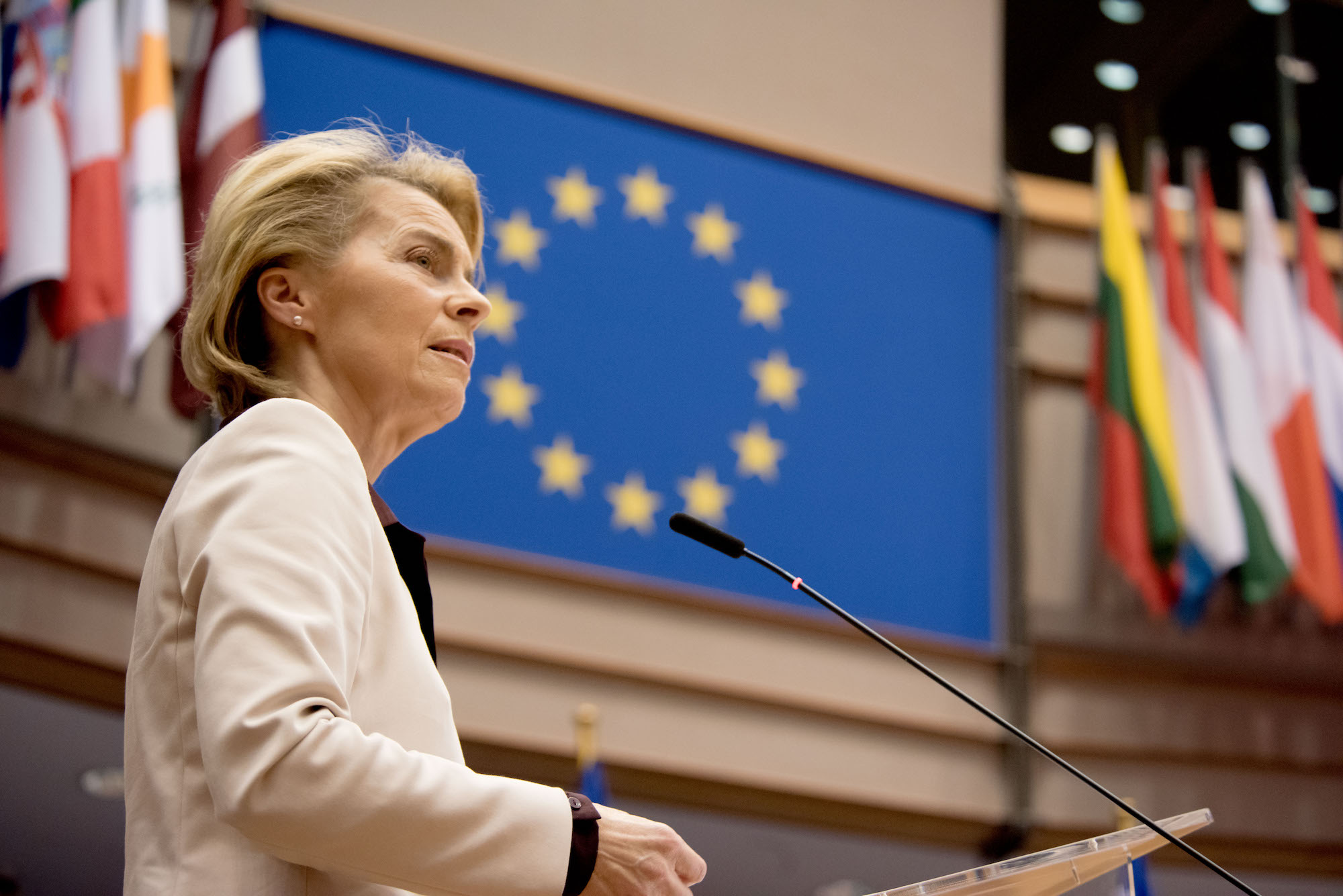 About the border in the European Parliament. Ursula von der Leyen declares solidarity with Poland

Highlights of the debate in the European Parliament:

The European Commission on Tuesday unveiled a system of sanctions for carriers who take part in or assist in the smuggling of immigrants and refugees. The idea is to create a blacklist of land, air and water transport operators.

Blacklisted carriers will be banned from flying over EU airspace and entering European ports. They will also not be able to refuel or repair their machines in the EU. They also have to take into account the suspension of the license

“We hope that the mere fact of introducing these regulations will be a deterrent. After all, airlines usually do not want to be involved in such practices. We can see how Belarus has recently started to disentangle itself, “says Ylva Johansson, EU internal affairs commissioner, to Gazeta Wyborcza. The rules announced today still have to be approved by the EP and EU governments in the EU Council.

During the debate on the border crisis in the European Parliament, the deputy head of the European Commission, Margaritis Schinas, also emphasized that subsequent transit routes used by Belarus to bring in immigrants and refugees are being closed.

“Flights from Baghdad via Dubai, Beirut, Istanbul, Damascus and Tashkent have been suspended. Europe counted on its friends and there are many of them. We make it clear that there are no gaps to be exploited in the partnerships that the European Union maintains around the world. As the issue extends far beyond the borders of Europe – it is a matter of global concern when innocent people are abused, ”said Schinas.

As he emphasized, the return of immigrants to their countries is a priority. “These people were sold the fantasy that they would reach Germany via Minsk.”

Relatively rarely, MEPs raised the issue of respecting human rights on the border with Belarus.

German MEP Martin Schirdewan (Die Linke) emphasized that “we are talking about people who are only dying, freezing on the Polish border, while we are investing in barbed wire”, and several MEPs appealed for the admission of humanitarian organizations to the border.

In turn, MEPs Róża Thun (Poland 2050) and Andrzej Halicki (PO) recalled that the Lukashenka regime is holding about 1,000 political prisoners. “Also Poles – Andrzej Poczobut, Andżelika Borys, or my young friend Siarhei Korshun. They must be free, and we must help them. We cannot turn our backs on them, ”appealed Halicki.

The European Parliament does not want Morawiecki

During the debate, the President of the European Commission, Ursula von der Leyen, said that the EU was in solidarity with Poland and the Baltic states.

“This is a challenge to the entire European Union” and “an attempt by the authoritarian regime to destabilize its democratic neighbors,” said the head of the European Commission. In her opinion, Lukashenka’s regime is exploiting the suffering of people imprisoned at the border for political purposes.

Von der Leyen emphasized that, in particular, the issue of sanctions against airlines involved in smuggling people should be discussed not only in the EU, which is why the Union coordinates its activities jointly with the USA, Canada and Great Britain. The chairwoman announced a tripling of funds for Poland, Lithuania and Latvia for border surveillance.

She also announced 3.5 million euros for the return of migrants. It is not only about return flights, but also centers for the reintegration of migrants in their countries of origin.

In the new budget, EUR 4 billion will be allocated to the administration of the EU’s borders, including for the purchase of equipment for border services.

Prime Minister Mateusz Morawiecki wanted to take part in the Tuesday debate. As reported by RMF FM, the European Parliament rejected the request of the Polish side. Officially, due to the fact that “in this type of debate, all countries are already represented by the six-month presidency of the EU Council” (in this case it is the Slovenian minister who will take the floor at the beginning of the debate).

As unofficially established by the station’s journalists, the reason for the refusal was also the fact that the Polish prime minister was using the podium in the EP to transmit his messages to his own electorate in Poland.

It was, among others, for the October debate, where – according to journalists’ interlocutors – “the Polish prime minister abused his hospitality by speaking longer than agreed”.

Morawiecki’s letter was read from the rostrum by MEP Ryszard Legutko.

“The prime minister of my government was supposed to come here, but unfortunately he was not allowed to do so. He asked me to convey the content he wanted to express. They reflect the views of millions of my countrymen, as well as the inhabitants of Europe, ”announced Legutko, then read Morawiecki’s letter.

“For several weeks now, Lukashenka has been sending hundreds of civilians to the border every day, and this is not a repetition of the 2015 migration crisis. We are dealing with a planned provocation, the migrants of which are only Lukashenka’s tools, and the goal is destabilization in Europe, ”wrote Morawiecki.

Further, the prime minister recalled Russia’s “neo-imperial” actions in recent years, such as the war with Georgia or the occupation of Crimea, which “we were unable to oppose”.

“I am writing” we “, although Poland has been firmly opposed to each of these cases from the very beginning. I write »we« because the victims of this policy in the long run are all of us, the whole of Europe.

A regular battle for the future of Europe is taking place on the eastern borders of the EU, on the Polish-Belarusian border. It is high time for us to realize this, ”wrote Morawiecki in his letter.

The prime minister listed seven “clear rules that will allow Europe to take the initiative” and block further actions by Putin and Lukashenka:

“These are the seven steps we must take. Otherwise, Europe will stand still and the ground beneath us will start to collapse, ”Prime Minister Legutka appealed.

A meeting of the Visegrad Group (V4) countries – Poland, the Czech Republic, Slovakia and Hungary was held on Tuesday in Budapest. “The coordinated diplomatic offensive on our side is already bringing positive results,” said Morawiecki at the joint conference of the prime ministers of the V4 countries.

Hungarian Prime Minister Viktor Orbán said that the EU had never been subjected to such migratory pressure before.

“Brussels is pursuing the wrong policy, it finances everything, which adds to the migratory pressure. Everything that the international language of migration calls the pull factor is just being activated. The EU supports it, supports NGOs, announces integration processes, ”Orban emphasized.

“At the same time, the EU does not provide funds for physical border defense.

The Hungarian position is still that the EU has to pay for the EU’s defense costs at the border. It is unacceptable that only these costs are to be borne by those countries which, through history and geography, are simply on the border of the EU.

Hungarians defend their country, but also the entire EU, and it would be appropriate if at least Hungary and the EU shared the costs of border defense in half, ”Orbán said.

The Eye makes sure that Poland does not leave Europe.
Support us so that we can continue.

Videogames entered his life in the late '80s, at the time of the first meeting with Super Mario Bros, and even today they make it a permanent part, after almost 30 years. Pros and defects: he manages to finish Super Mario Bros in less than 5 minutes but he has never finished Final Fight with a credit ... he's still trying.
Previous Zlatan Ibrahimović on the attack on César Azpilicueta. “I did it on purpose”
Next A2 Konin – Stryków and A4 Wrocław – Sośnica. How do I pay for a ride? E-TOLL PL, Autopay, motorway e-ticket