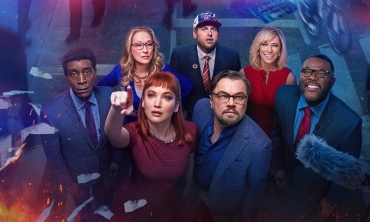 About the Oscars – The Future City

Among the nominees for the Academy Awards for the best moviethe only film that would truly deserve recognition is Don’t look up by Adam McKay released on netflix. Since the film contrasts too blatantly thedominant ideologydespite the nominations he has shamefully not won any prizesdemonstrating how pervasive the claim of a single thought is still effectively summarized in the slogan: “Don’t look up“. Among the other films in the running, the only ones to deserve the nomination are Tail – The signs of the heart by Sian Heder – winner of the coveted prize for best film – e West side story from Steven Spielberg. The latter film, despite being deservedly nominated in seven categories, only received the consolation prize for best actress not protagonist to Ariana DeBose, when she would have deserved the award at least for the best direction and scenography. The considerations are really bad, shamefully apologetic of the United States of America, the most aggressive imperialist power of the worldof the winner.

As for the other nominated films, none would have deserved either the award or the nomination for best film. In particular, the two films given as favorites and which had totaled the highest number of nominationsprimarily the truly unsustainable Belfast and the mediocre The power of the dog. Right after the movies more unfairly overrated they certainly are Dunes – which in addition to too many nominations has undeservedly won in many minor categories – and theequally insignificant Licorice Pizza. Immediately after, among the most overrated, it is necessary to remember the very boring Drive my car – absurdly awarded as best foreign film And The fair of illusions. Finally, the discrete is also overrated A winning family – King Richardeven if among the candidates we still place him in fourth place.

Between the candidates for best director the only really deserving one is the great filmmaker Steven Spielberg, for his valuable reinterpretation of West side story. On the other hand, the other candidates, including the worst is certainly Kenneth Branagh. Heavily post modern and, therefore, fully subservient to‘dominant ideology in “auteur” cinemaI’m Ryûsuke Hamaguchi – really overrated filmmaker – and Jane Campion, director absurdly considered a great filmmaker. As for Paul Thomas Anderson, although valid from a formal point of view, he directed a really meaningless movie such as Licorice Pizza.

Definitely overrated are the films that have received the nomination for best foreign film, in addition to truly unworthy winner Drive my caralso It was the hand of God by Sorrentino is just a sufficient film, albeit not as heavily post-modern as the winner. Also The worst person in the world by Joachim Trier, although among the least bad of the candidates, it remains a certainly overrated film. Fleealthough it may be considered the least worst of the candidate films, it nevertheless remains a mirror of our time, in which the problem of refugees, fleeing from fundamentalism and Russia, and discrimination against homosexuals is rightly emphasized, while political, international, economic and social problems assume little importance social conflicts are not taken into account. Ultimately the only film partially worthy of the nomination remains: Lunana – The village at the end of the world by Pawo Choying Dorji, even if it does not completely escape theOrientalism.

Among the most definitely undeserved prizes there is undoubtedly Belfastabsurdly winner in the category best original screenplay. Also in this category they would have truly deserved the award Adam McKay and David Sirota for the remarkable Don’t look upwhile really surreal is the candidacy of Licorice Pizza. Although among the least worst among the candidates too A winning family – King Richard it appears, however, overrated. Also the second least worst of the nominees for Best Original Screenplay, The worst person in the world by Eskil Vogt and Joachim Trier, appears decidedly overrated.

The award for the best non-original screenplay certainly went to the most worthy of the candidates, that is to Siân Heder for Tail – The signs of the heart. The nominations of Ryusuke Hamaguchi and Takamasa Oe for are definitely absurd Drive my carJon Spaihts, Denis Villeneuve and Eric Roth for the very boring Dunes and Jane Campion forequally soporific The power of the dog. While given the general low tone of the contenders, it may seem that the candidacy of The dark daughter – The Lost Daughter by Maggie Gyllenhaalda, based on an intriguing novel by Elena Ferrante.

The candidacies a best leading actor since, however much they received the nomination actors of undoubted valuein the impersonated roles they have culpably ignored the decisive estrangement effect. Among the candidates, however, he would have deserved the prize more Denzel Washingtonwith his mature Macbeth rather than Will Smith starring in A winning family – King Richard.

Even the prize to the Best Actress in a Leading Role to Jessica Chastainfor his interpretation of the interesting film Tammy Faye’s eyes it certainly is questionable. The actress is certainly very capable of impersonating herself in a character realistically presented as grotesquebut he cannot detach himself from it for encourage a critical look on the part of the viewer, who is led to impersonate himself, to justify and take the side of a completely and absurdly negative character. She would have deserved the award more Olivia Colmanperhaps the best in presenting in a critical and multifaceted way his character in the significant The Lost Daughter. Nicole Kidman is also good at representing a character of great depth, even within her limits, in the beautiful film Being the Ricardos – About the Ricardos. The interpretation of another great actress like Penélope Cruz in valid and unfairly underestimated movie Parallel mothers by Pedro Almodóvar. Finally, Kristen Stewart gives another good proof of herself in the significant interpretation of Lady D. in Spencer.

Although in this case too dominates the classic Stanislavskij methodcertainly more deserved is the Best Supporting Actor Award to dumb deaf Troy Kotsur, for the film Tail – The signs of the heart. Less understandable are the other nominees, including JK Simmons, nominated for the significant film Being the Ricardos – About the Ricardos by Aaron Sorkin, one of the most penalized films among the candidates for the poor acknowledgments received.

Definitely overrated too Encanto by Jared Bush, Charise Castro Smith and Byron Howard awarded Best Animated Film, although it is definitely the worst of the films that have won a nomination. This is the usual goofy and ultra conservative product of most US cultural industry anesthetics: Disney. Already Fleewhile not a great film, it certainly deserved more to be awarded, if only because it doesn’t try to ideologically erase the contradictions of the real world. The same Lucafrom Pixar, it certainly is less worse and dull from Encanto, although of course the Disney-produced film certainly doesn’t stand out. Perhaps the least worst of the candidates is The Mitchels against the machinesat least from a formal point of view where it is very creative and also decidedly against the tide, compared to the sugary molasses of Encanto. Even if from the point of view of the content the film turns out to be roughly also quite questionable, with the usual reactionary exaltation of the immediate ethics of the family. Precisely for these limits, certainly, from the decisive point of view of the content, it appears better Raya and the last dragonin which a decidedly progressive message. Recovering the decisive spirit of utopia and the principle of hope is staged a struggle waged by the most progressive elements of the different peoples to establish the cooperation and solidarity between different countries. Only then will it be possible to do away with the irrational fratricidal warfarethus allowing you to re-establish a organic relationship between man and the environmentable to effectively counteract the very current environmental disaster.

Also for the editing we would certainly have preferred the award to Hank Corwin for Don’t look uprather than the overrated DunesWhat did he do hoarding of technical prizes. The nominations are certainly not acceptable a A winning family – King Richard, The power of the dog And Tick, Tick… ​​Boom!.

Even the prize for i best special effects to Dunes does not convince us, as among the only other candidate films the purely culinary Shang-Chi and the legend of the Ten Rings it seemed to us more deserving from this point of view.

The same prizes at the best scenography to Dunes they seem at least questionable, since two films like West side story And Macbeth more significant probably also from these specific points of view.

For the best makeup and hairstyles she probably deserved more than the award The Eyes of Tammy Faye the significant Cruellawhich nevertheless won the well-deserved award to Jenny Beavan for i best costumes.

Finally, the nice film by Rodrigo García: Four Good Dayswhich only got a nomination for best song, certainly deserved more.

13/05/2022 | Copyleft © All the material is freely reproducible and only the mention of the source is required.

David Martin is the lead editor for Spark Chronicles. David has been working as a freelance journalist.
Previous Dark Tide, plot and trailer of the film aired on Saturday 14 May on Tv8
Next Alan Ritchson is confirmed in the cast of the film – Jornada Geek