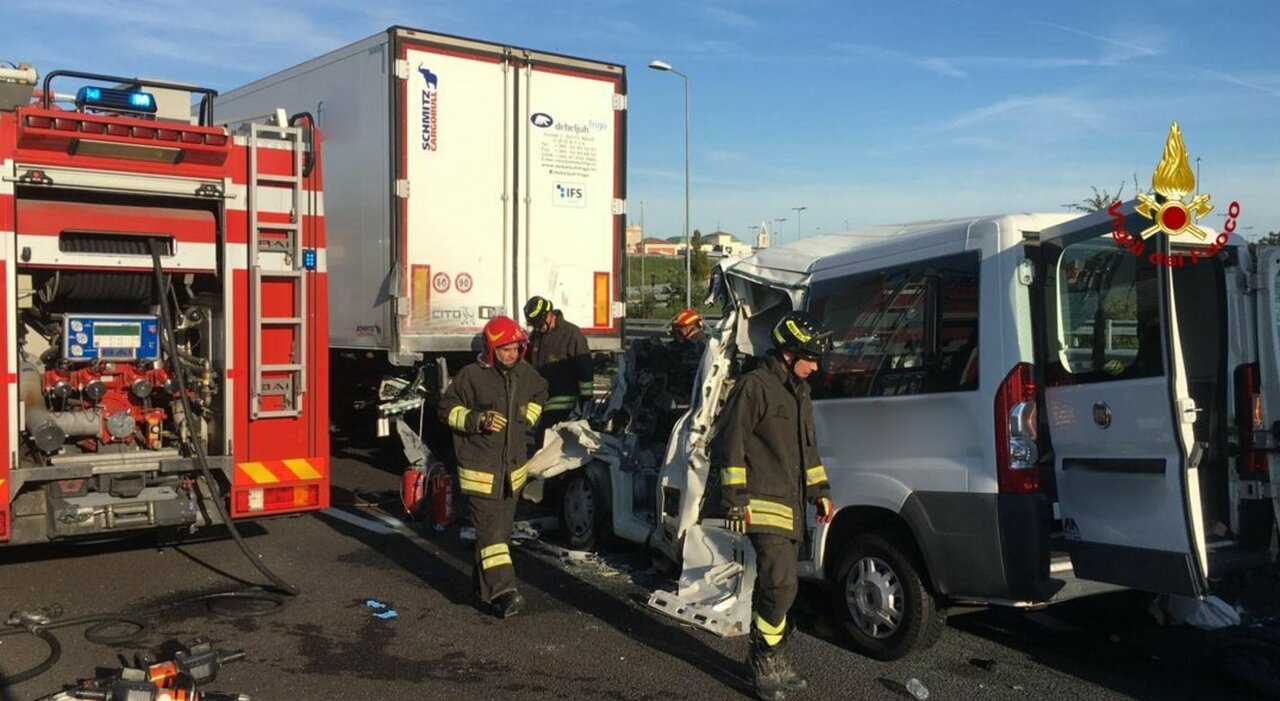 Accident A4, 6 dead and one seriously injured. Disabled minibus against a stop in the queue, motorway closed

Tragedy in A4. With the van they end up under a tir: six people died in the three-lane section, in the terrible accident happened today, Friday 7 October, just before 4 pm in the section between the San Donà-Noventa and Cessalto junctions, in the direction of Trieste. Autovie Venete reports it. The driver of the van would not have noticed the heavy vehicle in front of him. The van with at least six people on board ended up under the trailer of the truck. Everyone died stuck in the cockpit. Five of the six dead are from Riccione.


Accident A21 in Caorso between heavy vehicles. Cistern on fire: two dead and several injured

Hell on the A1 near Fabro Two dead, six injured extracted from the metal sheets

I LIVE THE SEVENTH PASSENGER – The firefighters of San Donà di Piave, Motta di Livenza and Mestre pulled out a passenger from the van crushed under the truck still alive. The driver of the vehicle and five other passengers died in the rear-end collision. The injured was stabilized on the spot and transferred, in serious condition and with a confidential prognosis, to the hospital in Mestre. The Polstrada and the staff of Autovie Venete are working on the spot. The motorway section towards Trieste is still closed to traffic.

THE BUDGET – The budget is provisional. Closed motorway, compulsory exit at San Donà. At the time of the accident, slowdowns were reported – also through the variable message panels – due to the intense traffic between Meolo – Roncade and the A4 / A28 junction (Portogruaro junction). The call for help came immediately to 118 who mobilized several ambulances together with the firefighters of San Donà di Piave, Mestre and Portogruaro.

ZAIA: “STOP WAR BULLETIN” – «We cannot accept the A4 pass to history for being the highway with a daily war bulletin. Now is the time of pain, of closeness to the families of the victims, but the problem remains, and must be radically resolved ». This is how the president of Veneto Luca Zaia comments with ANSA on the tragic accident that cost the lives of six people in the Venetian section of the A4. «I have reread the title of the news several times – says Zaia – because I hoped I had misunderstood …. Even now I find it hard to believe that six people can have a weight in life in this way. We cannot accept it, we could now define it as the ‘della mortè’ motorway, dotted with fatal accidents in the sections most collapsed by traffic ». For Zaia it should be remembered that the Venice-Trieste “is our gateway to the east, in a territory where several European corridors pass, and inevitably the traffic coming from all over Europe”. “We must put an end to these daily tragedies – concludes the governor – today of a huge size, 6 dead and one seriously injured”. A disaster on which specific specific dynamics “we cannot enter, because we do not yet know, but which confirms that road safety cannot be separated from very necessary interventions”.

THE DISCOMFORT – Inevitable the inconvenience with the blocking of traffic for those who, coming from Venice, must head towards Portogruaro, Udine Trieste. On the spot, the agents of the traffic police and the traffic auxiliaries of the Autovie Venete dealership.

THE DYNAMICS – The accident occurred in the middle lane: the driver of the van, who was driving at high speed, did not notice the truck stopped in the queue. The vehicle is completely crumpled under the truck. To allow rescue and the removal of the vehicles involved, the section between San Donà and Cessalto towards Trieste was closed. The San Donà junction towards Trieste is also closed. There is a huge deployment of law enforcement and rescuers on the spot.

Videogames entered his life in the late '80s, at the time of the first meeting with Super Mario Bros, and even today they make it a permanent part, after almost 30 years. Pros and defects: he manages to finish Super Mario Bros in less than 5 minutes but he has never finished Final Fight with a credit ... he's still trying.
Previous “I could have become a musician. I chose football for a reason”
Next TV series. Kristen Stewart and her girlfriend work together.