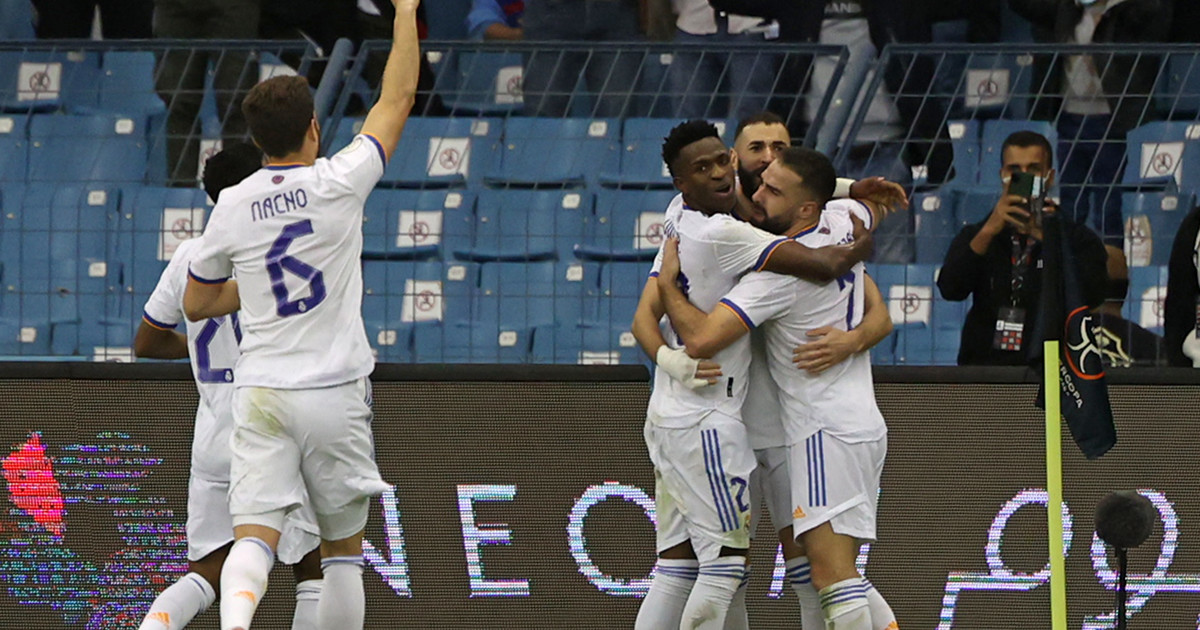 Amazing El Clasico! Real advanced to the final of the Spanish Super Cup

Since 2019, the Spanish Super Cup is played in the formula of a mini-tournament with the participation of the national champion and runner-up as well as the Copa del Rey winner and finalist. Real Madrid triumphed in 2020, and Athletic Bilbao a year later.

However, it is only now for the first time in this format that the famous El Clasico took place, i.e. the clash between Barcelona and Real. The second pair are Atletico Madrid and Athletic Bilbao. The matches are held in Saudi Arabia, where the Super Cup is being held for the second time.

The most important for Barcelona, ​​however, was the debut of Xavi Hernandez on the bench in the famous derby match against Los Blancos. – I experienced all possible classics. There were occasions where one side was the favorite and ultimately couldn’t win. Barcelona is in construction and Real Madrid is in great shape. These are unpredictable matches. We want to be ourselves, keep our personality and impose our style of play. It will not be easy, but we will try to reach the final, Xavi said at the pre-match press conference.

For Barcelona, ​​the debut in the team of Ferran Torres, imported from Manchester City in winter, was also important. He made his debut only in the match against Real, because due to financial problems, the club could not register him as a new player and he did so only after loaning Philippe Coutinho to Aston Villa. However, Torres only appeared in the first half of the match.

Real dominated from the beginning, and they harassed Blaugrana’s defense time and time again. The Kings opened the score after 25 minutes of the game. The ball in the center circle was lost by Sergio Busquets, who was outsmarted by Karim Benzema. The French later launched Vinicius who was coming to a clean position, who gave Ter Stegen no chance with a strong shot in the short corner.

Xavi Hernandez’s players created the first serious opportunity to score in the 32nd minute, when Luuk De Jong headed his head, but Thibaut Courtois did well in the goal. The Belgian, however, was very unlucky 4 minutes before the break. Ousmane Dembele was cross, and Eder Militao’s awkwardness was used by De Jong, from whom the ball bounced and then fell into the goal from the post.

After the break, Barcelona did much better, which created another good opportunities to score. Dembele was very active, first looking for colleagues in the penalty area with other centers, and also trying to defeat Courtois himself. A bit sluggish, Real woke up about 25 minutes before the end. In the 69th minute a nice shot from Karim Benzema landed on the post. Three minutes later, the French got his way, though it wasn’t easy for him. His first shot was perfectly saved by Ter Stegen, but shortly afterwards, Dani Carvajal did a great job for the forward, and Benzema completed the game from close range.

Real played calmly and wanted to keep the result until the end, but it failed. In the 84th minute, after a short corner, Jordi Alba crossed, and the substitute Ansu Fati headed for the helpless Courtois. A draw after 90 minutes made extra time necessary.

And only 8 minutes after restarting the game, Real was in the lead again after a great reserve action. A pass to the right flanked to Rodrygo, who fired into the center of the penalty area, Benzema passed the ball past Federico Valverde, who fired through the ground to score.

David Martin is the lead editor for Spark Chronicles. David has been working as a freelance journalist.
Previous This could be the first victim of electricity and gas increases. The government forgot about them
Next The Vatican has tightened anti-pandemic laws. Penalties up to 1,500 euros