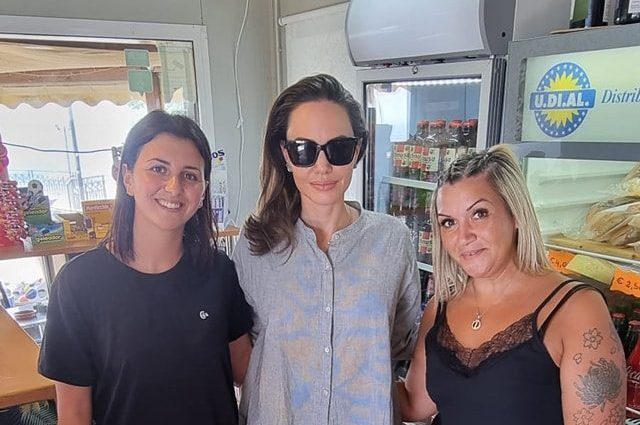 Angelina Jolie unexpectedly arrives in Rocca Massima for the ‘flight of the angel’: the amazement of the citizens

Angelina Jolie unexpectedly arrived in Rocca Massima together with twelve bodyguards, she sent everyone away and tried the ‘flight of the angel’, one of the most famous attractions in Italy.

The actress Angelina Jolie went to Rocca Massima today, in the province of Latina, to make the ‘flight of the angel’, the longest and fastest zip line in the world that makes people suspended over three hundred meters high harnessed along a steel cable ‘fly’. The owners of the Volo bar, near the attraction, posted the photo on Facebook together with the actress to immortalize this incredible moment. “You have made a flight to Rocca Massima, who will it be ???”, they wrote on the local page. Together with them, the unmistakable Angelina Jolie, in Latina to shoot the film based on the novel by Alessandro Baricco, ‘Bloodless‘. The Hollywood star showed up accompanied by her bodyguards. And he also wanted to repeat the flight of the angel: at the end of the first lap he asked to repeat, flying back to the Lepini Mountains.

“She arrived with twelve bodyguards who made everyone move away from the launch point, and made a jump – says Deputy Mayor Angelo Tomei – She allowed herself a photo with the two girls who accompanied her and prepared her. he knows where or how he learned that in Rocca Massima there was the flight of the peregrine falcon, but for the village it was a moment of pride to know that an actress like Angelina Jolie knows Rocca Massima “. Angelina Jolie then visited the town, being amazed by the beauty of the village. The actress, who is in Matera these days to shoot her new film, then left. In this period she will split between Puglia, Basilicata and Lazio.

David Martin is the lead editor for Spark Chronicles. David has been working as a freelance journalist.
Previous Kevin Feige promises that we will find out the plans for the next big MCU saga “in the coming months”!
Next Beyonce back! Everything we know about the “Renaissance” era