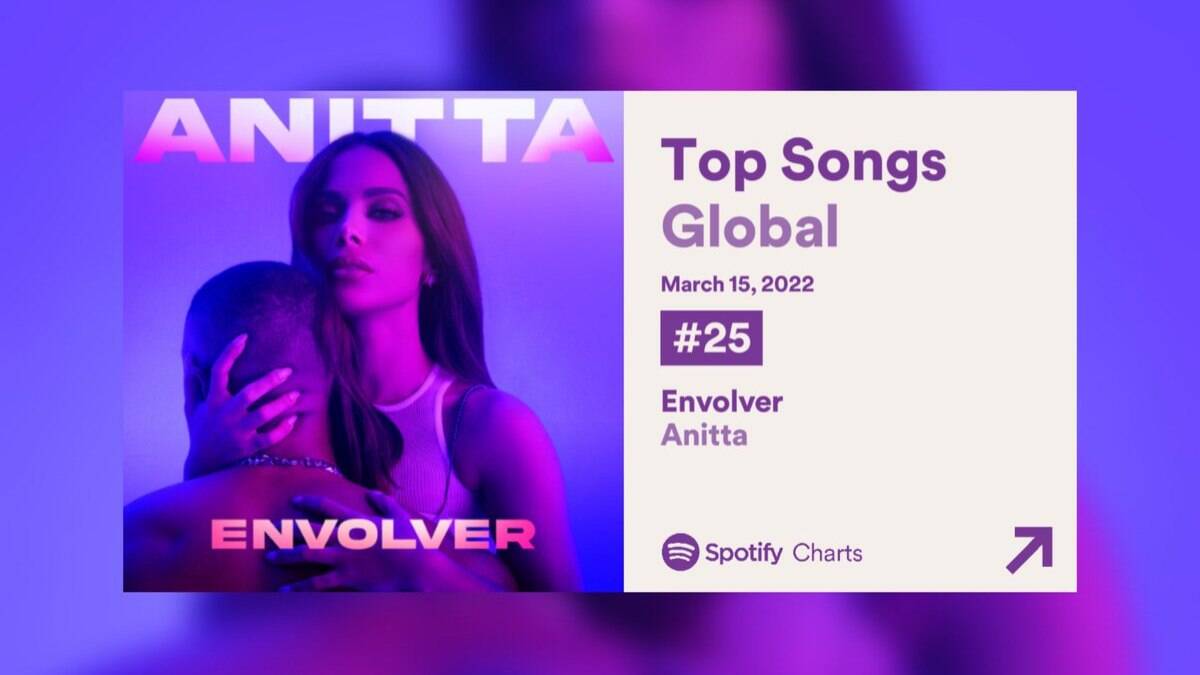 
The first Brazilian artist to enter the Top 10, she started in funk carioca and achieved international success.

Anitta reached the Top 2 of Spotify Global with the song ‘Envolver’. In the last 24 hours, there were more than 3.5 million plays. With that, she is the first Brazilian artist to reach the Top 10 in the platform’s history. Part of this success is a result of the song’s choreography going viral on TikTok.

Next, get to know the singer’s career and learn how she achieved international success!

Larissa de Macedo Machado, or just Anitta, is one of the biggest names in
music

Brazilian. Born in the state of Rio de Janeiro, in 1993. In addition to being a singer and songwriter, she is also a producer and businesswoman.

Anitta started in funk, in 2010, on the record label Furacão 2000. With the song ‘Meiga e Abusada’, in 2012, she became a hit on carioca radios, which earned her a contract with the label Warner Music Brasil.

Released in 2013, the debut album, ‘Anitta’, reached the top of the chart
brazilian musical

and was responsible for establishing her as an artist. That year, the hit “Show das Poderosas” won in the categories of ‘Música Chiclete’ and ‘Best Video’, at the Multishow Award for Brazilian Music.

BBB 22 test exceeds 17 hours: find out what it requires from participants

The album ‘Bang!’, released in 2015, is considered one of Anitta’s biggest hits since her debut album. It reached the third position among the best sellers in Brazil: with 40 thousand in the first week of release and more than 300 thousand copies until May 2016. The hits ‘Bang’, ‘Deixa ele Sofrer’ and ‘Essa Mina é Louca’, were in the top 10 of the Billboard Brasil Hot 100.

The artist, who has sung alongside Madonna and Snoop Dogg, was also awarded by the MTV – Europe Music Awards in the categories of ‘Best Brazilian Artist’ and ‘Worldwide Act: Latin American Artist’.

Eternals: a movie based on extraterrestrial theories

For years working to expand her career around the world, in June 2020, Anitta announced the signing of a contract with Warner Records in the United States. ‘Tócame’, with the participation of Arcangel & De La Ghetto, and ‘Me Gusta’, in partnership with Cardi B and the rapper Myke Towers, were two of the releases of this
new phase of the artist

‘Girl From Rio’, which should be released next month, will be the singer’s first album with an international label. In addition to the eponymous song, the work will also feature the hits ‘Envolver’, ‘Boys Don’t Cry’ and ‘Faking Love’.

In September 2020, Anitta debuted on the Billboard Hot 100, one of the most important music rankings in the United States. The English and Spanish song ‘Me Gusta’, featuring Cardi B and rapper Myke Towers, was ranked 91st. Before her, only 7 Brazilian artists achieved this feat. “I do not know what to say! Just feel,” the singer commented on Twitter.

Find out about other events that marked Anitta’s career.

Videogames entered his life in the late '80s, at the time of the first meeting with Super Mario Bros, and even today they make it a permanent part, after almost 30 years. Pros and defects: he manages to finish Super Mario Bros in less than 5 minutes but he has never finished Final Fight with a credit ... he's still trying.
Previous Elisabeth Olsen talks about Wanda’s future – Jornal do Oeste
Next Slap by Will Smith, the Academy’s response: “We do not condone violence”