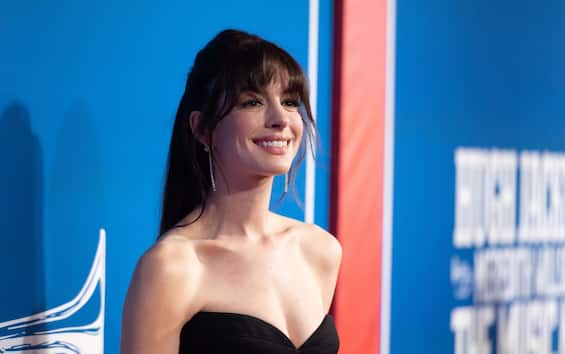 Anne Hathaway on holiday in Rome with her family

The Oscar-winning actress for Les Misérable was spotted on vacation in Rome with her husband and son Jack. For her, visit the beauties of the capital, its churches and gardens, but also the inevitable pleasures of the all-Italian cuisine

Looking forward to seeing her play alongside Jared Leto in the new series We Crashed arriving on March 18, 2022, the American actress allowed herself a mini vacation in Italy. Anne Hathaway has been immortalized in the past few hours while walking through the streets of Romewith her husband Adam Shulman and the little son Jack only 2 years old. It is not known whether their eldest son also went on the journey with them Jonathan born in 2016, as he does not appear in any photos at the moment.

Anne Hathaway on holiday in Rome

WeCrashed, Jared Leto and Anne Hathaway in the trailer of the tv series

Roman holidays for Anne Hathaway which has been photographed in the past few hours on the streets of Capital together with his family. In front of a fountain, in an elegant blue blazer, gray sweater and jeans, Anne Hathaway showed herself to be very refined, complete with a long and soft ponytail, sunglasses and with a matching cap and scarf. Oscar-winning American actress with the role of Fantine in Les Miserables, admired the beauties of Rome with her second son Jack in her arms, last Sunday 20 February. A European holiday that could only stop in the cradle of civilization and in the all-Italian culture. Between Anne Hathaway’s visits, also an appointment at Basilica of San Clemente in the Monti district, where the star de The devil wears Prada she arrived, always very elegant, in the company of her husband Adam Shulman.

Anne Hathaway among the pleasures of Italian cuisine

What does a visitor never give up when arriving in beautiful Italy? To the pleasures of his cooking. The unmissable appointment of Anne Hathaway as a guest of The Tavern of the Imperial Forums. It is the same official Instagram account of the well-known restaurant that recounts the meeting with the American star live and with customary photography. “This Sunday we had the honor of hosting one of Hollywood’s most beautiful smiles and Academy Award winning actress, Anne Hathaway! She proved to be a true cooking enthusiast and wanted us to share with her the recipes of the dishes that we let her taste”.

Anne Hathaway will star in We Crashed

The American actress will be back on air in a few weeks (from 18 March 2022) with an unprecedented TV series for Apple TV+ (it will also be visible on Sky Q and via the app on the Now Smart Stick). Her name is We Crashed and, based on David Brown’s famous podcast WeCrashed: The Rise and Fall of WeWorkwill see her play the lead alongside the other Academy Award winner Jared Leto. We Crashed is a miniseries written and conceived by Lee Eisenberg and Drew Crevello that chronicles the rise and fall of WeWork, one of the most famous startups in the world, as well as the lives of the people who revolve around this reality. While Jared Leto will play the role of Adam Neumannco-founder of WeWork, Anne Hathaway is his wife Rebekah Neumann. The miniseries is expected with 8 episodes lasting about 50 minutes each.

Birthdays 2022, the celebrities who will celebrate a special birthday

This year there are many stars who will blow out 40, 50 and 60 round candles. From Jessica Biel, Kirsten Dunst, Anne Hathaway and Francesco Scianna (who will become splendid forty-year-olds in 2022) to Valerio Mastandrea and Jennifer Garner (50 years old, unbelievable) then Tom Cruise and Jim Carrey (60? Impossible!), here are all the VIPs who will celebrate a very important birthday

Jessica Biel will be 40 years old. The actress, wife of Justin Timberlake, was born on March 3, 1982.

Kirsten Dunst will also become a splendid forty year old this year, born as she is on April 30, 1982.

Also for Anne Hathaway this year the candles will be 40. The actress was born on November 12, 1982

David Martin is the lead editor for Spark Chronicles. David has been working as a freelance journalist.
Previous The archaeologist on the big screen, not just Indiana Jones. The book
Next Cristina Marino age, husband, Luca Argentero, children, pregnant, work