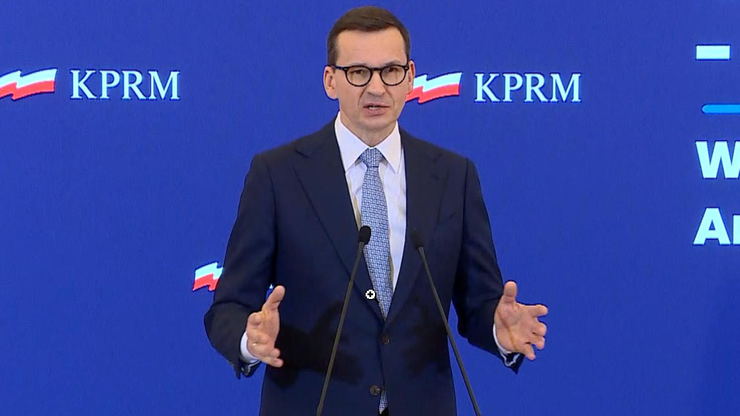 – Most Poles spend their sleepless nights on higher bills. There is no denying that such a situation may take some time. It is known that inflation is a phenomenon caused by external factors, but it is still us who bear the price and we have to find an appropriate answer, said the Prime Minister.

As he added, “over 80 percent of prices are influenced by external energy factors.” Among them, the prime minister mentioned “Russian gas manipulations” and “irresponsible, dogmatic EU policy”. The third reason is recovering from the pandemic crisis.

– Every Pole has the right to know the truth. Over 50 percent energy prices are the cost of CO2 emissions, i.e. the cost of the EU climate policy. You have to fight climate change, but is it really the best path? – He was asking.

– According to economists, the first Anti-Inflation Shield it cut the tip of the inflation by about 1-1.5 points. percent The second target is to have a similar positive impact – said Morawiecki.

– In the second anti-inflationary shield, we are implementing new solutions for six months from February 1, that is until the end of July. With 23 percent at 8 percent we want to lower VAT on fuel. This will be a fundamental price change, announced the head of government. Such a solution, Prime Minister Mateusz Morawiecki announced in an interview with Interia.

The changes are expected to be visible in three or four weeks. – We estimate the impact on the price of a liter of fuel, crude oil and diesel oil is around 0.60 gr., Even up to 0.70 gr. This will be the result that the Polish state budget will take on, he said.

– We are reducing VAT on food to zero. This year’s cost may exceed 6 billion, maybe even up to 7 billion, some estimates show, but it is very important. And here I appeal to all entrepreneurs who trade in food products to lower the prices of their products accordingly (…). It is very important. This is not the earnings of entrepreneurs today, it is the part that goes to the Polish state budget – he said. He indicated that lowering the VAT rate to zero means that prices should drop from 1 February.

The prime minister called for checking whether traders are actually lowering product prices.

– We abolish the gas tax completely. We reduce VAT on electricity to 5% for the next 4 months. and VAT on heat up to 5 percent. To the Anti-Inflation Shield 2.0, we add a VAT reduction on fertilizers to 0%. – said the prime minister.

– All reductions in VAT rates may cost the Polish budget in total between PLN 15 and 20 billion – said the head of government.

The Prime Minister stressed that the Anti-Inflation Shield 2.0 is “the most extensive and multi-point in comparison to many EU countries”. – Fighting inflation will be difficult, but we care about Polish families – he concluded.

Anti-Inflation Shield 2.0. Prime Minister: families will save over PLN 100

According to the prime minister, only lowering the VAT rate on food to zero will leave about PLN 45 in the wallet. The reduction of taxes on fuel, gas and heat is – as Morawiecki pointed out – another “dozens of zlotys”. In his opinion, the anti-inflationary package will save over PLN 100.

The head of government pointed out that millions of Polish families “count every penny, every zloty”. He emphasized that the Polish Order and the so-called anti-inflationary shields “will have a net effect on the budget of the Polish family.” – If you honestly count the changes related to the Anti-Inflation Shield 1.0, 2.0 and the Polish Order, the truth here will be very bright and beneficial for people – he said.

The variety offered by video games never ceases to amaze him. He loves OutRun's drifting as well as the contemplative walks of Dear Esther. Immersing himself in other worlds is an incomparable feeling for him: he understood it by playing for the first time in Shenmue.
Previous A monitor that no one has ever had and cloud gaming on televisions. Samsung wants to attract players
Next Robert Lewandowski’s mom reveals: I saw tears in his eyes Football