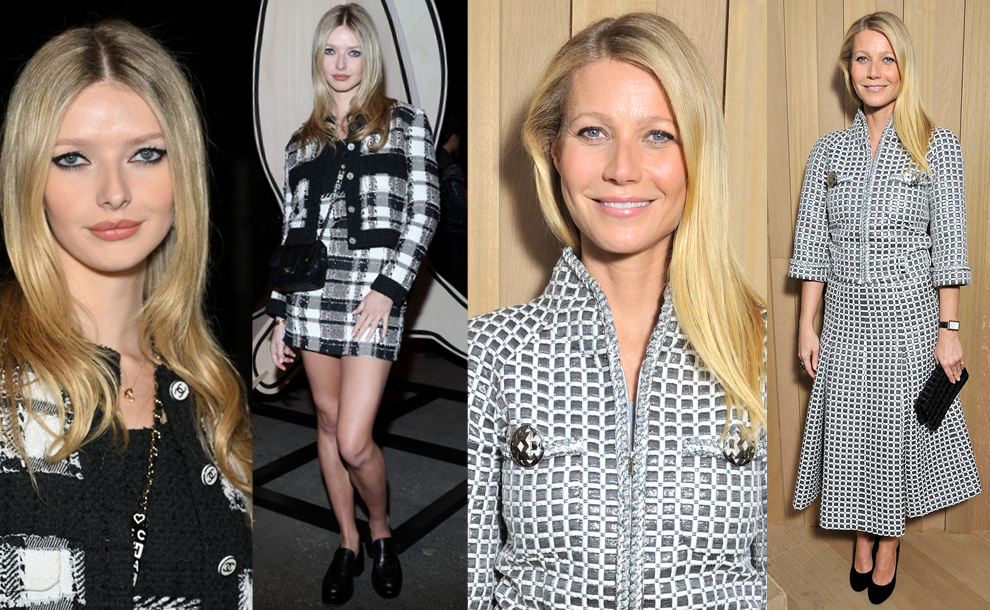 Apple Martin at Chanel, the look like mom Gwyneth

L‘last Chanel girl? Apple Martin. The eighteen year old daughter of Gwyneth Paltrowowned by ex Coldplay frontman Chris Martin, attended the show in the front row Haute Couture Spring Summer 2023 of the House. The latest Nepo baby to tread the front row: and the girl’s fate seemed to have already been written.

Apple did not go unnoticed in Paris, which until now had only appeared on the Instagram profile of the internationally renowned mother, actress, entrepreneur and model. For one of hers first public appearances – of a long series? – the very young Apple Martin appeared in the front row at Virginie Viard’s show, sitting next to stars of the caliber of Sadie Sink, Angèle and Lucy Boynton.

His look for the Chanel fashion show held at the Grand Palais, in a scenography by Xavier Veilhan which reproduced, in 3D cardboard, the bestiary loved by Coco: a full jacket and short skirt in the Maison’s classic bouclé, distinguished by the famous black and white motif and logo buttons. The novella It Girl paired the twin-set with a pair of chunky loaferswithout socks. And the outfit immediately recalled those chosen by mother Gwyneth, one of the regulars of the Chanel fashion shows: it is impossible not to remember her last appearance, when Karl Lagerfeld was still leading the fashion house, at the fashion show Chanel Haute Couture Spring Summer 2016.

For the occasion – it was January 26, 2016 – the founder of Goop had chosen a suit very similar to the one worn by his daughter today, again with a black&white tweed pattern. For Gwyneth, a midi skirt and pumps, more suited to her age, as well as the hand-held clutch, replaced by Apple with a shoulder bag. The youthful and punk touch of the girl of the Gen Z is also mirrored by makeup, more marked, similar to the one that the mother showed off in the 2000s. And then the hairstyle: themselves blond hair of the mother, medium-long, smooth and with a central parting, which accentuates the resemblance.

Apple Martin from Chanel, the latest Nepo baby to make his way

Sooner or later it had to happen. After Dakota Johnson, Kaia Gerber, Lily Collins and Hailey Bieber – who even turned it into a slogan on a t-shirt – Apple is the latest in chronological order of the so-called Nepo babies (from “nepo”, an English abbreviation of “nepotism”) to make his way into the world of fashion. The right name and/or the right connections open the doors to fashion shows (and more). The fate of Gwyneth’s daughter seemed already writtenas the American journalist journalist and author noted Derek Blasberg on Instagram.

Sitting in the front row next to Apple, he shared a post with some photos of the girl backstage and at the fashion show, whose caption reads: «Karl Lagerfeld met Apple Martin when he was 4 and declared that one day she would become a Chanel girl . It happened today!” complete with emojis of an apple, a heart and a French flag.

On the other hand, Paltrow has never missed an opportunity to sing the praises of her daughter, of whom she is very proud. Last year, on the occasion of Women’s Day, she had dedicated a teenager to the tributedescribing her as “the girl gives me hope for the future of the sisterhood and the future of our planet, which has made me into the woman I am today more than anyone else”. In short, the “apple” – it must be said – never falls too far from the tree…

David Martin is the lead editor for Spark Chronicles. David has been working as a freelance journalist.
Previous “Grease”, timeless magic: the musical of successes at the Creberg
Next Record-breaking Zoe Saldana: she’s the queen of super-grossing movies