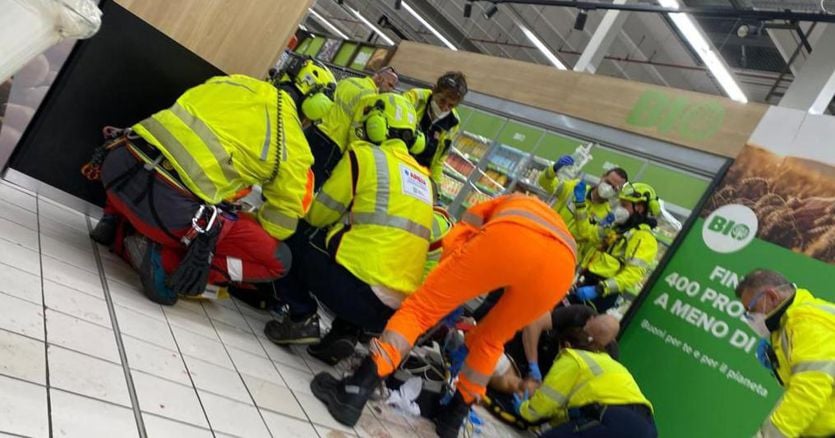 The 46-year-old unemployed man who killed a Carrefour employee and seriously injured four other people, including the Monza player Pablo Marì, is accused of murder and attempted multiple murder on Thursday evening in the Milano Fiori shopping center in Assago in the Milanese area. The subject would have severe psychological problems. He grabbed a knife from the exhibitor inside the supermarket and, without warning, started hitting random people, killing a 30-year-old employee of the large-scale distribution chain and seriously injuring 4 others.

Three of them were transported in red code to the hospital and the clinical picture appears very serious. The people involved are 6, they are from 28 to 81 years old. The carabinieri of the provincial command of Milan are working to reconstruct the dynamics, but for now they exclude that there may be a terrorist matrix at the basis of the gesture. More likely that the man hit in the throes of a psychic crisis that suddenly exploded. Reached by a blow that would not have caused worrying damage Pablo Marì, the Spanish defender of Monza. “A bitter evening for Lombardy today,” are the words of the Lombard governor, Attilio Fontana. The President of the Senate, Ignazio La Russa, hopes for “greater prevention” to “avoid as much as possible” tragedies like the one on Thursday evening.

The reconstruction of the dynamics

Condolences for the tragedy came from Carrefour and also from the Municipality of Assago. “Now that we are away we are calmer but we were really terrified, we did not understand what was happening, we saw people running away in tears,” said a girl who was in the mall at the time of the attack. “I was very impressed with a girl who was crying, completely in shock.” A scene from an American film, tell others, who still struggle to reconstruct what happened a few hours earlier. “We were at the bar and we thought it was a robbery because we saw some guys and a lady running, then we saw more and more people with upset faces and we realized that something serious had happened”, adds another girl who was in the bar of the shopping center when the 46-year-old threw himself at passers-by.

«At a certain point – continues the witness – she started talking about guns so very kindly, as she pulled the shutter down, she hid us because not even she understood what was happening. We stood in the back of the bar as we also saw the rest of the restaurant close by hiding people inside. Then after about 5 minutes a Carrefour saleswoman arrived who had witnessed the first attack, she did not speak of weapons but only of a madman. She was upset and the girl from the bar helped her. ‘ Shortly after, “we saw people running away and we left too, we went out while the loudspeaker of the shopping center was asking for urgent medical attention and we got away as quickly as possible. Now, «knowing that they have taken him puts us at ease and we hope – she concludes – that the wounded can get away». The supermarket employee died on the way to the hospital. Carrefour Italia expressed its closeness to employees and customers involved in the attack, as well as to their families, and made it known that a psychological support service has been activated for all those involved.

Others injured in serious condition

Meanwhile, other wounded are in very serious conditions, so neither doctors nor carabinieri are willing to take positions or make predictions. The man, whose personal details have not yet been provided, was taken to the offices of the provincial command of Milan in via della Moscova, where he would continue to utter meaningless phrases in line with his evident confusion. Uncensored, he had been on treatment for a year for a severe depressive crisis. The case is entrusted to the prosecutor Paolo Storari. The magistrate, who went to the place where the attack took place, will question the 46-year-old, if the latter manages to regain sufficient clarity.

Videogames entered his life in the late '80s, at the time of the first meeting with Super Mario Bros, and even today they make it a permanent part, after almost 30 years. Pros and defects: he manages to finish Super Mario Bros in less than 5 minutes but he has never finished Final Fight with a credit ... he's still trying.
Previous Here’s how to easily recover gold from broken equipment
Next I Am Groot, Brie Larson: “I’m a huge fan”