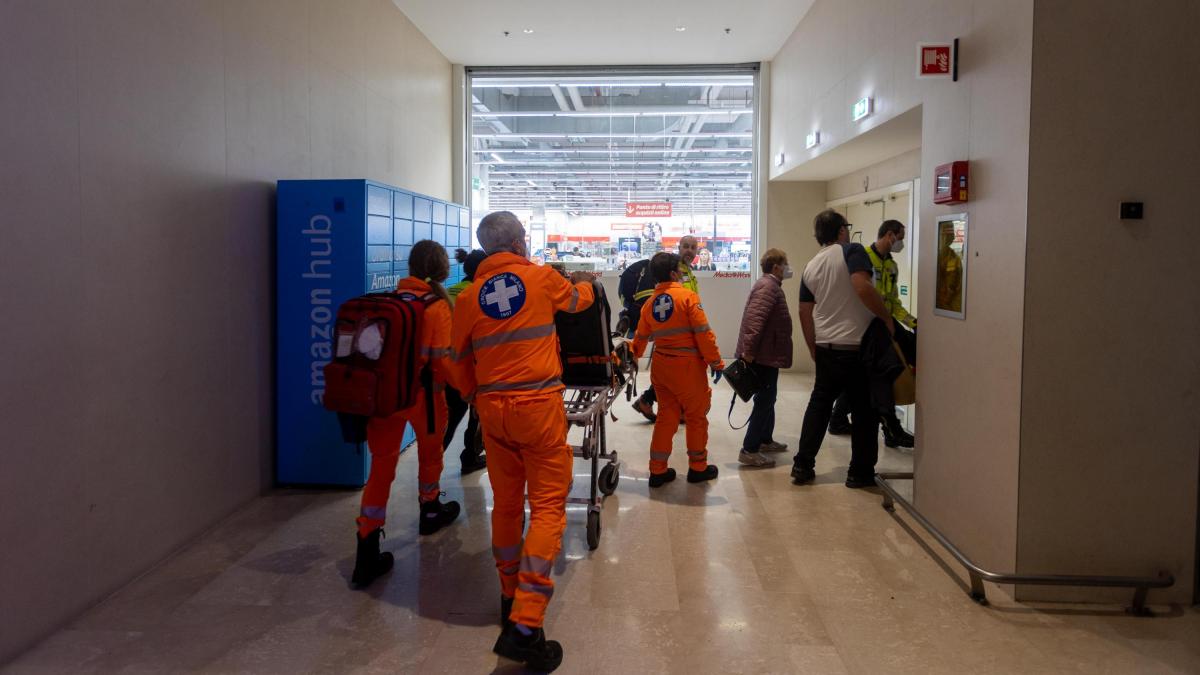 Assago, five stabbed at Carrefour, one died: “We, barricaded in the shops”

The attack in the shopping center and the stories of those present in shock. Psychological support for employees. In the shops barricaded behind the lowered shutters Governor Fontana: a bitter evening for Lombardy

The mall’s cameras frame the central aisles of the supermarket. It is 18.35. The customers all turn abruptly, in one direction. The images have no sound, but the witnesses say they heard loud, rambling screams. Meaningless phrases. It is in that direction that everyone is looking. A man walks with a kitchen knife in his hand. He tore it from the display cabinet from the housewares aisle, opened the plastic box, freed the blade, started moving among the customers. And hit at random. When the first ones understand what is happening he is already on the other side, where there are drinks, fruit and organic products. Now other screams are heard, they are from other men and women. They shout “help”. The others run and run away. The white floor tiles are covered in blood. Monza player Pablo Marí, 29, on loan from Arsenal and here with his wife, is also hit. The stab takes him in the back. It is serious but out of danger.

The man with the knife does not run but staggers. He approaches the crates and strikes for the fifth time. In front of him is Luis Fernando Ruggieri, 47, of Bolivian origins, he is one of the heads of the checkout area. He has no escape. Deep chest wounds, he dies while attempting a helicopter rescue to the hospital. Then he walks over to a chest and strikes again. “I saw him coming, he brushed me with the knife. I instinctively pushed my daughter away. Then they jumped on him and stopped him », says a terrified witness. Supermarket employees, security officers, other customers block it. Among them also the former Inter footballer Massimo Tarantino. They push him to the ground, try to push the knife away. The carabinieri find him on the floor, the blade is still close, but he no longer tries to escape. The man with the knife is called Andrea Tombolini is 46 years old, he was born in Milan, he has no precedent. He was being treated for severe depression. Parents tell of a admission to psychiatry after a back operation, had signed his resignation and had left. Then, on October 18, he ended up in the emergency room again: he punched himself in the head and face.

Nobody knows why he decided to show up yesterday afternoon at the Carrefour-Milanofiori shopping center in Assago, on the outskirts of Milan, right in front of the Forum, to randomly hit its victims, to act as a mass murder. What is known about him is that he appears to have arrived at the mall alone, seven minutes before striking. He killed Luis Fernando Ruggieri and injured four other people. Three are still in critical condition. In addition to the Monza player Marí (who ended up in hospital in red code), there is also an elderly couple and a cashier. They all have back and chest injuries. They were taken by surprise. Tombolini is taken to the barracks, he continues to babble nonsense phrases.

They arrive in Assago the prosecutor Paolo Storari and the leaders of the Arma with General Iacopo Mannucci Benincasa, provincial commander. “We heard screams, I thought someone was sick – says a store cashier -. Then they made us escape ». Panic breaks out on social media: “If you are in Assago, run away, a madman is stabbing everyone”. Inside, among the shopping aisles, there are traces of a yet unexplained massacre: “Terrorism has nothing to do with it, it was not a subversive action,” the investigators repeat. Now we are working to understand if Tombolini was followed by doctors. And why on a very hot Thursday in late October he behaved like a mass killer.

Videogames entered his life in the late '80s, at the time of the first meeting with Super Mario Bros, and even today they make it a permanent part, after almost 30 years. Pros and defects: he manages to finish Super Mario Bros in less than 5 minutes but he has never finished Final Fight with a credit ... he's still trying.
Previous Bologna returns to victory, defeated Real Madrid
Next Danny Huston to star in Kevin Costner’s 11 Hour Western