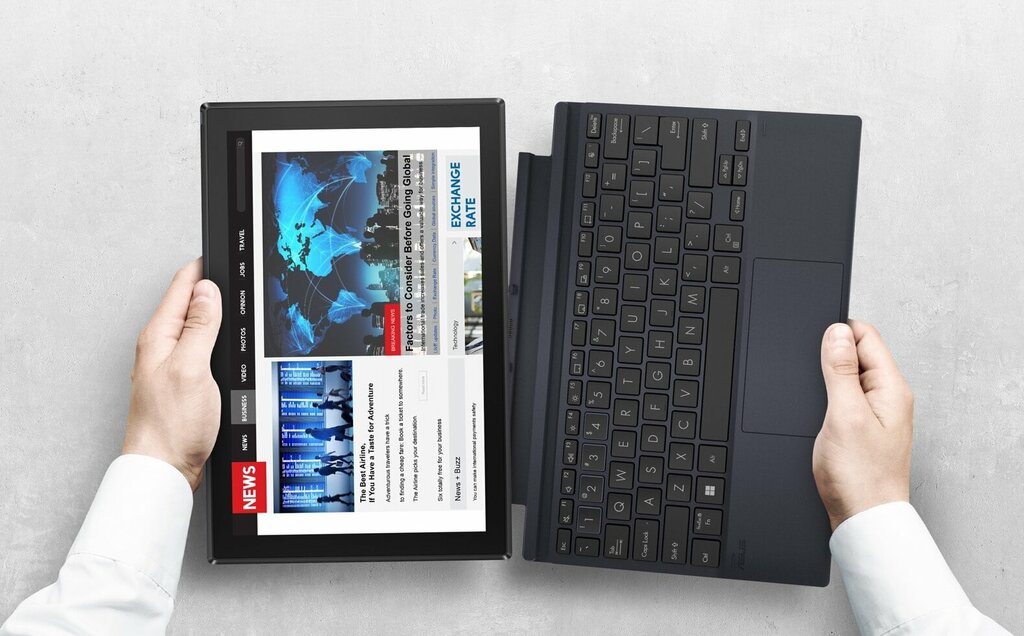 ASUS ExpertBook B3 Detachable – 2-in-1 tablet

A hybrid based on the ARM system is an increasingly common configuration on the market – another equipment of this type Expertbook B3 Detachable, which will offer us the possibilities of one of the Snapdragon systems and Windows 11 Pro.

ARM systems seem to be created when it comes to the possibilities and applications of hybrids with universal characteristics. Microsoft has such equipment in its portfolio (we are talking about the Surface Pro X series), and now it’s time for similar equipment from ASUS.

Tablet with Snapdragon on board

ExpertBook B3 Detachable is – as the name suggests – a tablet with a detachable keyboard, so another such device in the company’s offer after the gaming ASUS ROG Flow Z13. The equipment is equipped with a screen with a diagonal of 10.5 inches, displaying the image at a resolution of 1920 x 1200 pixels in the 16:10 format.

The screen has decent parameters, but – to put it bluntly – not crazy. The maximum brightness of the matrix is ​​320 nits, while the color scale ends at 87% of the NTSC color palette. Competition in this aspect can do more on a regular basis.

The tablet is powered by the second-generation Snapdragon 7c system, which can be found, for example, in the Samsung Galaxy Book Go – this SoC is a unit consisting of eight cores with a maximum clock speed of 2.55 GHz, and the whole offers TDP at a low level of 7W.

The Qualcomm system will be supported by 4 or 8 GB of LPDDR4 RAM, as well as 64 or 128 GB of data space on the eMMC medium. The battery with a capacity of 38 Wh is not crazy, but it is worth mentioning that the tablet is very light – it weighs only 630 grams, and with the keyboard, the weight is slightly more than 1 kg.

Interestingly, the keyboard offers a fairly large key travel – it’s 1.5 mm, and also has an optional backlight. The set of ports is limited to USB Type-C and a headphone connector, and two speakers and two microphones are responsible for multimedia support. There were also cameras – front 5 MP and rear 13 MP. The whole thing will work under the control of Windows 11 S or Pro.

At the moment, we do not know when and at what price the new ExpertBook will make its debut on the market – it can be expected that it will probably happen in the summer.

He likes dogs, pizza and popcorn. Already a fanboy of Nintendo and Sony, but today throws anything. He has collaborated on sites and magazines such as GameBlast, Nintendo World, Hero and Portal Pop, but today is dedicated exclusively to Spark Chronicles.
Previous Canada does not rule out the sale of weapons to Ukraine and new sanctions against Russia
Next PIT-2. To fold or not? Chaos in companies