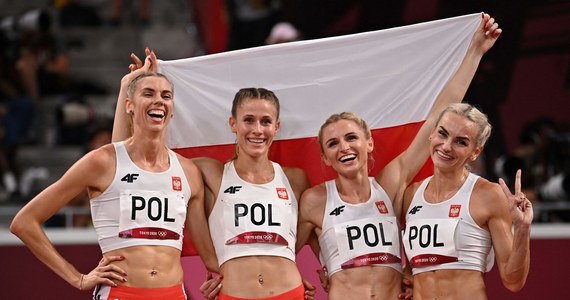 Athletics. Matusiński on relay races. Święty-Ersetic and the company are the pride of Poland

Olgierd Kwiatkowski, Interia: The Tokyo Olympics ended three months ago. Is it time to start preparations for the next Olympics – in Paris?

Aleksander Matusiński, women’s 4×400 m relay trainer: – It is always so, that immediately after the end of one big event, which are the Olympics, the coach has to think about the next Olympics. Tokyo is history. The players train. Some resumed training sooner, others later. Most of them, however, had quite a long break, especially Justyna Święty-Ersetic, who treated her injury and rehabilitated. Iga Baumgart-Witan had to heal her Achilles tendons. The girls did it in order to run in good health next season and be in shape at the Olympics in Paris.

Will these players still be in the relay race? Justyna Święty-Ersetic is now 29, Iga Baumgart – 32.

– We do not want to make any declarations. In sport, it’s not like if you say that I train for three more years, it will definitely happen. On the way, something may happen that the girls give up sports. Or maybe they will continue their careers after Paris? They are all more involved in training. I will say more, they are cleaned and they started training with pleasure and smile. They know that they are going to have a hard year, full of sacrifices and demanding activities. But it is precisely because they won the medals of the Olympics and are already somewhat fulfilled, and they do it without pressure, they do what they love.

But won’t this sporting achievement weaken their motivation?

– These are not the types of athletes who are complacent. They either do something or they don’t do it at all. For them, the punishment is when they cannot train, they have an injury or the trainer forgives them because they are tired. They can come to terms with it for a short time, but they want to work hard all the time. They know that the whole world trains hard, they know that there is a huge competition in this competition in Poland. Everyone has to train to the maximum to go to the big party. Ola Gaworska is a good example. In March, she won a medal at the indoor world championships, and yet she did not start at the Olympics, did not make it to the squad, was out of the eight. She is a really very titled competitor with a medal of the world championship and two medals from the hall. There is no player with us who has some promotion to the national team. It is similar to the United States – there is a lot of competition. Girls must be in shape already at the Polish championships. A fulfilled player who would train half-heartedly has no chance of being in the team, despite the merits.

The girls know that my decisions are irreversible, but most of all they are fair in the long run and they optimize the chance of winning a medal. Rather, there was no situation in which the relay ran badly and I do not know if it happened that there was a competitor who could run better in reserve.

How many players do you take into account when determining the composition of the national team?

– There are eight or nine girls. I would say that five of them are on a much higher level, all of the others can enter the relay and, in the absence of one or the other, can run in it. Today I am in a comfortable situation, completely different than when I started working. There were three players then, the fourth was a bit weaker. When one good one was missing, I had a problem. It is different today. In April this year, three girls were unable to train, one was sore, and yet we won gold at the Relay World Championships. Then Justyna came back and we had silver in the team, but they still didn’t run in the optimal line-up.

Is too much wealth the cause of the problems? You have to control a group of valued players, all of them already successful.

– We got used to ourselves and our methods. We have known each other for a long time, even from the junior age, i.e. over 10 years. The girls know that my decisions are irreversible, but most of all they are fair in the long run and they optimize the chance of winning a medal. Rather, there was no situation where the relay ran badly and I do not know if it happened that there was a competitor who could run better in reserve. I introduced a lot of these changes, I used rotation and sometimes sacrificed the best player to run in the first shift, to lead the relay to the lead, like recently Natalia Kaczmarek or Justyna Święty at the indoor championships, and she always ran last. I think the players trust me so much that they never feel hurt. They know that if I set the composition of the relay race, I will do it right.

Will you make any changes to the line-up in the near future?

– Our sport is measurable. If the girl runs well and gets a good result, she will jump into the relay race. I don’t get attached to surnames. I am known for this that I can name two players from the basic squad and put in girls who gain trust, and I can see that they are doing well in training. But sometimes I regret that this relay is 4×400 and not 6×400 or 8×400. We would have an even greater chance of winning gold medals.

The real sensation was the gold at the Games in the Mixed Relay. After these few months, can you explain this unexpected result?

– The boys joined the girls when it comes to the sports level. Several girls have been world class for years. In Tokyo, which I would not include in the line-up, they would all run very well. It was worse with the boys, they did not have individual minimums. Now they have started to run very well, especially Kajetan Duszyński and Karol Zalewski. This resulted in us having four very good players and we were fighting with the best.

How does the world view the successes of Polish relay teams?

– Probably with envy, especially the Dutch. They were counting on a women’s relay medal a lot, but they wanted to do it in a short time, their bench was too short. The Dutch women ran brilliantly in the indoor championship, which they won, and our girls were third. But then it was much better with us. It’s just that we have been building our relay race for almost 10 years.

And the Americans? How do they see you?

– In Yokohama, when the girls won with them for the first and only time, the Americans turned on their heels, did not shake hands, they left. Now that has changed. They come up on their own, congratulate them, feel respect for the girls. We are noticed in the world, we are great ambassadors of not only athletics, but also the entire Polish sport and the country. We are effective and repeatable, we are successful. You can always count on girls. And yet we have no right to win against Jamaica. They have ideal conditions for training throughout the cancer, genetic conditions to sprint to be the best in the world, and yet they lose with us in the relay race.

You sometimes complain that the conditions for athletes in Poland are not ideal at all.

– We have a very big problem in winter. There are no athletics halls for training. I can’t accept it. Successes, successes, but nothing changes in this direction for athletics to develop. It’s good that there is no snow, but how much can you count on not having a cold winter? The national team, the leaders will manage. They will go to the training camp in South Africa, to the south of Europe and they will train under normal conditions, but it is difficult for them between the camps. Gosia Hołub-Kowalik returns from South Africa to Koszalin and has to run in snow, ice or mud. They have several athletics halls in Belarus, three in Prague, and we have to go to Ostrava for the Silesian championship. This is an unacceptable situation.

After your recent successes at the Olympics, have you not had any offers from foreign federations?

– I had before – from Bahrain, but then I was not a senior trainer, but a junior trainer. Now I’m not looking elsewhere for happiness. I work at the University of Physical Education in Katowice, I am in the process of doing my PhD. I am satisfied with the work with the Polish staff. I think I did the right thing to stay in the country.

David Martin is the lead editor for Spark Chronicles. David has been working as a freelance journalist.
Previous Retail sales in October 2021 accelerated. Consumers spend so as not to lose money due to inflation?
Next Netherlands: Pole pushed off the coast. He was taken to the hospital