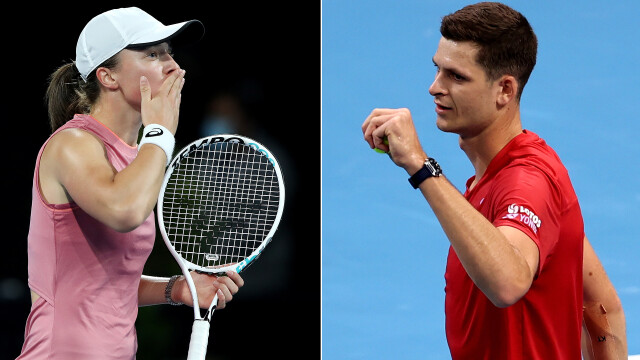 Australian Open 2022 from January 17 in Eurosport and Player

The seedlings are opened by the leaders of the world rankings – Australian Ashleigh Barty and Novak Djoković, with the start of Serb – the nine-time winner of this event – still in question.

The Serbian leader of the world ranking of tennis players on Tuesday once again trained at the Melbourne Park facilities, which will be the arena of the Australian Open.

The competition in the main part of the Australian Open starts on Monday. Djoković triumphed in this tournament a record nine times.

Djoković has not been vaccinated against COVID-19 so far and thus has not met the requirements of the event organizers. He was exempted from this obligation on medical grounds, but after arriving in Australia on Wednesday evening, his visa was revoked and, straight from the airport, he was taken to a hotel in a suburb of Melbourne, where asylum seekers are also accommodated.

His lawyers challenged the authorities’ decision and a hearing was held on Monday, where Judge Anthony Kelly ordered the immediate release of Djoković, who was detained at the hotel, finding the decision to revoke his visa “unreasonable”. After being released from prison, the 34-year-old tennis player emphasized that despite all the vicissitudes, he wanted to stay in Australia and play in the tournament.

However, the fate of the winner of 20 Grand Slam events – he shares this record with the Spaniard Rafael Nadal and the Swiss Roger Federer – will be decided by the immigration minister Alex Hawke, who has the right to withdraw the Serb’s visa. If he made such a decision, he would block the tennis player from entering Australia for three years.

The minister is delaying the decision and, according to the media, it may be influenced by the fact that the information that the Serb has provided in the application form on the basis of which he applied for a visa raises more and more doubts. And this is treated as a crime.

In the last 14 days before his trip to Australia, Djoković was supposed to be only in his home country, but photos and videos on social media indicate that he may have been in Spain in the meantime.

In addition, one of the arguments his lawyers put forward in defense of the tennis player was supposed to be a positive test for the coronavirus he received on December 16. On this basis, as a healer, he was exempted from the obligation to vaccinate before his arrival to the Antipodes, but the Australian authorities point out that the recent infection is an argument for admitting its inhabitants, not foreigners. Now it turns out that the test result itself raises doubts, the more so that later the Serb was supposed to fail to comply with the rules of isolation.

The ATP organization referred to all the confusionwhich guides and supervises the tennis competition. She concluded that the case was harmful to all sides, including a negative impact on the player’s well-being and his preparation for the Australian Open.

It was noted that ATP respects the sacrifices of Australians, who for two years abolish all restrictions resulting from the COVID-19 pandemic, and the strict rules applicable to entry into the country, but at the same time it was emphasized that Djokovic was convinced that he had obtained the exemption from compulsory vaccination required by the organizers health reasons.

The organization also noted that in the future it would expect clearer rules and better communication to help avoid repeating similar situations.

David Martin is the lead editor for Spark Chronicles. David has been working as a freelance journalist.
Previous The anti-inflationary shield will temporarily lower the prices by 3.4 percent. The deputy president of the NBP gives his estimates
Next Fan Snoop Dogg paid 450,000. dollars … to be his neighbor in the metaverse