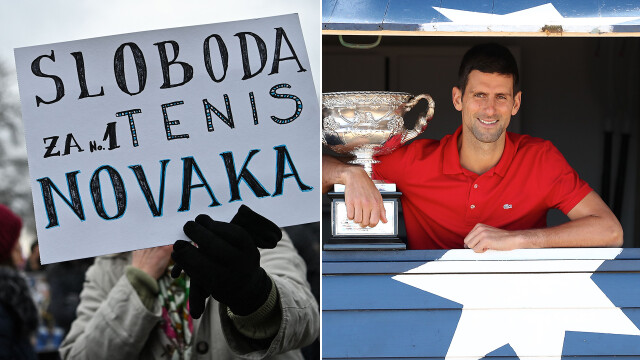 Australian Open 2022: Serbs fight to free Novak Djokovic. What is the threat of a tennis player? What is this about sick leave?

Australian Open from January 17 live on Eurosport and Player

The Melbourne-based daily The Age writes of “at least one tennis player and activist” who have crossed the Australian border and intend to participate in the Australian Open Grand Slam, starting January 17, on special medical leave.

A similar dismissal was attempted by the nine-time Australian Open winner, who landed in Melbourne late Wednesday evening. However, he was detained by the Australian Border Force. After the auditions that lasted almost all night, the tennis player’s visa was canceled and he was threatened with expulsion from Australia.

However, the tennis players ‘lawyers appealed against the officials’ decision to the court, which granted the motion to suspend the deportation. A hearing on what happened to Djoković is scheduled for Monday morning local time. The Serbian tennis player was temporarily placed in an immigration detention center, turned into a Park Hotel in nearby Carlton.

What is this about sick leave?

Let us remind you that the cause of the confusion is the so-called medical leave enabling visitors to Australia to avoid, in exceptional cases, the obligation to present documents confirming vaccination. Exemptions are granted by a special commission which analyzes the submitted applications in terms of compliance with precisely defined criteria.

They include, among others severe cases of the so-called adverse reactions after vaccination, making it impossible to take a second dose of the preparation. Coverage of COVID-19 in the six months prior to arriving in Australia is also on the list.

And it is this circumstance that is most often given in requests for release. It was probably also included in Djokovic’s application. And it aroused suspicion, because it is common knowledge that the tennis player was infected with the coronavirus, but this happened in mid-2020.

“The Age”, citing the opinions of three officials wishing to maintain anonymity, who analyzed Djoković’s application for medical release on Thursday night, writes that in their opinion it was poorly documented. The evidence for the release of a tennis player was to be “minimal and supported by only one doctor”.

However, the turmoil around the world leaderboard has caused the federal service to keep a close eye on the remaining layoffs, which have already led some Australian Open participants to cross national borders. The tennis Australia federation organizing the tournament informed that a dozen or so people could take advantage of this opportunity. As stated, the doubts concern at least one tennis player and one activist. However, the sources make a reservation that the analyzed cases differ significantly from the situation in which Djoković found himself.

Three years without entry into Australia?

Monday’s decision of the court may not only depend on the tennis player’s participation in the Australian Open and the chance to fight for the 21st title in his career. Djoković, 34, may be banned from entering Australia for the next three years, automatically granted to anyone whose visa has been canceled because “it may endanger the health, order or safety of the Australian community.” An overtly anti-vaccine position of a tennis player may be considered as such, especially if he has committed an abuse in connection with it when submitting an application for dismissal.

Djokovic’s situation is not made easier by the atmosphere of the political conflict that arose after his arrest. The father of a tennis player, eagerly speaking to Serbian and Russian media, speaks of “Australian slavery”, calling his son “the leader of the free world of poor and disadvantaged nations”.

#Djokovic supporters are lighting candles and singing outside the Melbourne hotel where the tennis pro is being held to mark Orthodox Christmas Eve. Some have dashed over after church. In the video they are chanting “Nole”, the pro’s nickname # AO2022#Melbourne#novakdjokovicpic.twitter.com/u1RaGPop3K

The president of Serbia, Aleksandar Vucic, is also directly involved in the tennis case. On the Australian side, there are assurances from Prime Minister Scott Morrison that in the case of Djokovic it is only about respecting the rules that apply to the same extent to all visitors to Australia.

In front of the hotel where the tennis player is staying, small groups of Serbian fans gather, burn Christmas candles (Christmas is just beginning in Orthodox Serbia) and call for the release of their national hero.

David Martin is the lead editor for Spark Chronicles. David has been working as a freelance journalist.
Previous Musk has reasons to be happy. He made billions in one day
Next Omikron in Austria. The country introduces new restrictions