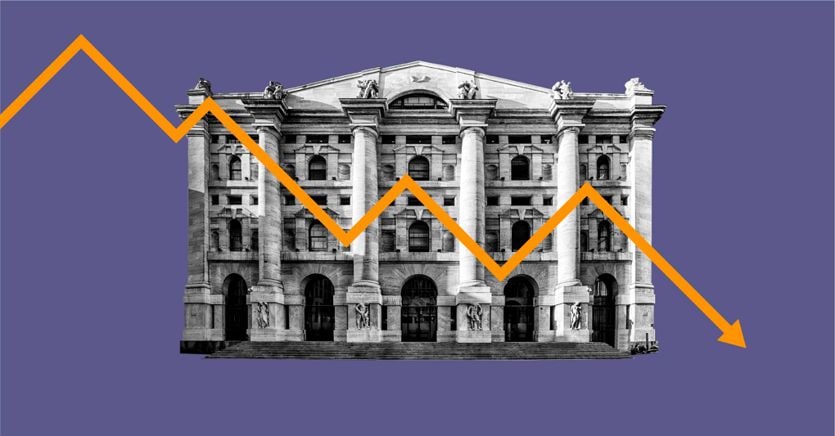 (Il Sole 24 Ore Radiocor) – Session in the red for the European stock exchanges, after the declines on the eve of the competition, however limited by the intervention of the Bank of England . All indices are losing in equities, despite Porsche’s bullish debut, with the record IPO in Europe. Negative signal from the collapse of H&M earnings due to the closure in Russia. The BoE slowed down the wave of equity sales in the session on Wednesday 28 September by announcing support for the government bond market, sunk by the maxi fiscal plan announced by the Liz Truss government.

Investors are refocusing on the combination of inflation and recession and await data on consumer prices in Germany, which could influence the next moves of the ECB. Meanwhile, overseas, Raphael Bostic, president of the Fed of Atlanta, indicated that he believes a new 75 basis point hike in the cost of borrowing will be launched in November and a 50 point hike in December, bringing year-end rates to 4.25-4.5%.

Meanwhile, the international geopolitical situation is increasingly tense: one fourth loss has been identified in the Baltic Sea in Nord Stream gas pipelines, targeted by possible sabotage. The Swedish Coast Guard said “there are two losses on the Swedish side and two on the Danish side,” adding that the two losses on the Swedish side are “close to each other”. The cross accusations between Russia and the United States on the alleged sabotage continue, while Washington has also recalled the American citizens present in Russia and Europe has launched a new package of sanctions against the country. However, gas in Amsterdam is decreasing.

Porsche debuts at 84 euros, the largest IPO in Europe

Porsche shares run on the Frankfurt Stock Exchange on the day of their debut. Challenging the weakness of the market, the shares of the car manufacturer controlled by Volkswagen are trading at 84 euros, against the placement value of 82.5 euros, top of the fork initially indicated and placed between 76.50-82.50 euros. The capitalization of Porsche, therefore, is around 78 billion euros. Thus, the IPO of the car manufacturer turns out to be the largest on the European market, considering the capitalization values. “The ipo opens up greater entrepreneurial freedom for Porsche,” commented the company. The agreement that provides for the transfer of profits or losses to Volkswagen will end at the end of the year.

At Piazza Affari Leonardo – Finmeccanica tries to recover, after the drop of more than 6% on the eve. If the banks are weak, Stmicroelectronics continues to lose share after the losses on the eve, caused by the news that Apple, one of its main customers, will not increase the production of iPhones. Out of the main basket, Racing Force celebrates the half-year which saw a profit up by 92.6%, while the Mfe Barretrano on the effect of the accounts.

The variety offered by video games never ceases to amaze him. He loves OutRun's drifting as well as the contemplative walks of Dear Esther. Immersing himself in other worlds is an incomparable feeling for him: he understood it by playing for the first time in Shenmue.
Previous Calls have a new look with Google Phone: how to enable it
Next Inter, Lukaku’s return postponed: what’s behind it. No Rome and Barça at risk