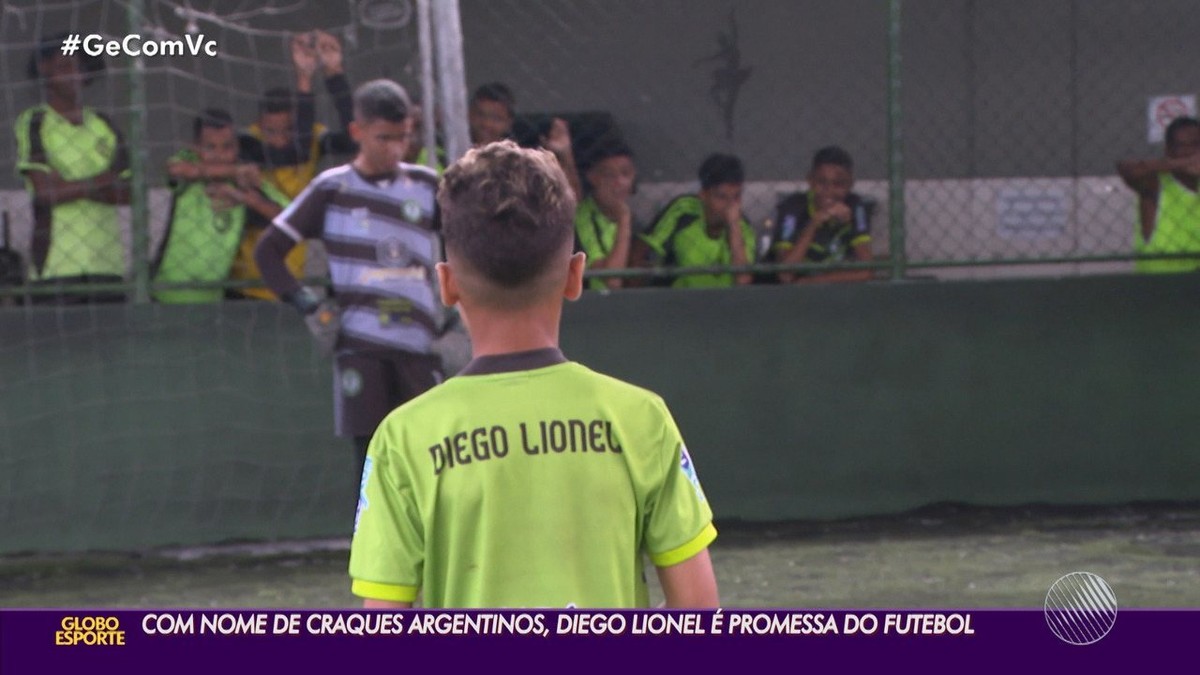 It’s not enough to have the name of a star, you also have to shine with the ball at your feet. At nine years old, Diego Lionel from Bahia has enchanted and attracted attention wherever he goes. So much so that nine teams have already shown interest in counting on the young promise. But it was Palmeiras, a club with a good recent history in the revelation of talents, the chosen one.

– My big dream is to play in the World Cup. Be happy to play ball. Playing the Champions League, playing for Barcelona with the number 10 shirt – Lionel designs.

It doesn’t take much thought to understand the origin of the name of the young Bahian talent: Diego Lionel Pereira Silva. Fábio Silva, Diego’s father, explains that the choice was made because of the idolatry of Argentine legends Diego Maradona and Lionel Messi.

– Diego Lionel based on Diego Maradona and Lionel Messi. These two football geniuses were always the ones that inspired me. My first passion in football was for Maradona, since 1986, in 90 mainly, where I could see more closely his genius I fell in love. And after he stopped playing, it took a long time for someone to come along to reawaken that passion in me. That’s when Messi came. I started to like football again because of him, that’s why when Diego was born I put that name on him – recalls Fábio.

And it wasn’t something very well discussed with Diego’s mother, Leila Silva. But, little by little, everything fell into place, until the way his son kicked the ball.

– She just didn’t hit me because it was a cesarean and she still had the stitches. Because it was already agreed among us that the name would be Pedro Joaquim, I don’t know why, I think it was fashionable at the time. She liked that name, but I didn’t like Pedro Joaquim. I remember that when I was going to the registry office, there behind Shopping Barra, I thought: hey, I already had this idea of ​​putting Messi, who was at his peak, and I thought of Maradona, then Diego Lionel formed. When I arrived at the registry office I didn’t call her, I sat at the table and said Diego Lionel. The girl at the registry office wanted to put Diego Leonel on, I said no. She went to the person in charge and asked if she could. When I got home with the registration in hand, she was like that, said: hey, you’re crazy! Only she accepted, she started to get used to Diego.

– I’m not left-handed and neither is my wife, and he plays very similar to Messi, it’s something that we say is not just ground, it was some connection I had at that time and thank God it’s been working very well – proudly says the dad.

It didn’t take long for Diego to live up to his name. At the age of five, he was already showing talent with his left leg. So much so that he started playing to stand out in competitions with older children, up to 12 years old.

At the age of 5 Diego already showed some quality with his left leg, but he was quite shy. His father was already working on Lionel’s head, which was a big change. He had the quality, but he had the shyness. Then he got better and when he was 7 to 8 years old, Diego showed a quality far above the others. That’s when we realized that Diego was different, Diego thought first, understood everything first and then the agent began to understand that he was different. At the Dani Cup, he was 9 years old, me and his family decided to put him to play against the 12 year old boys. He had a great highlight and scored 12 goals in the competition – reports coach Kaike Cordeiro.

It was from there that attention on Diego Lionel increased, and the list of interested clubs only grew. Nine big Brazilian clubs showed interest in counting on the young promise. Flamengo, Fluminense, Athletico-PR, Internacional, Santos, Corinthians, Bahia, Vitória and Palmeiras. But it was the latter that seduced the whole family.

– Palmeiras made a project for the family and signed with him – completes the coach Kaike Cordeiro.

Packed for the new club, Diego is also sponsored by a large sports equipment company. Young and with a lot of future ahead of him, he is an example for his former teammates.

– The reaction was sensational. Today Diego arrives at training and the boys ask to take a picture, they ask to hug him. We spent a week there in Palmeiras, then when he came back we welcomed him and the boys hugging. Diego Lionel is now an example, a mirror, who left the same place as them and is now heading to a great club at world level. – completes the trainer Kaike Cordeiro.

* Intern under the supervision of reporter Ruan Melo

Videogames entered his life in the late '80s, at the time of the first meeting with Super Mario Bros, and even today they make it a permanent part, after almost 30 years. Pros and defects: he manages to finish Super Mario Bros in less than 5 minutes but he has never finished Final Fight with a credit ... he's still trying.
Previous In Naples stop the clothes hanging. Indeed, no
Next Driven the Delorean case / On Rai 3 the film with Jason Sudeikis and Lee Pace