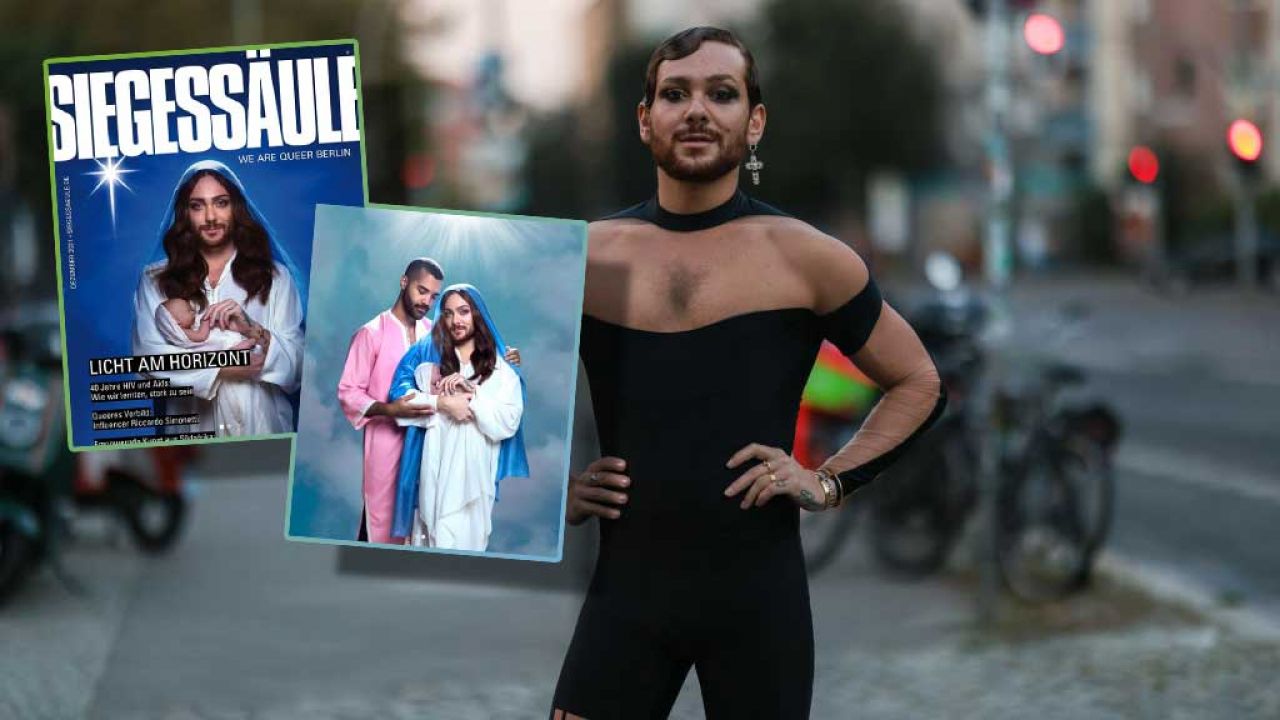 Bearded Mary on the rainbow cover of queer magazine. This is the LGBT ambassador to the European Union, Riccardo Simonetti. Internet users outraged

“How else could the rainbow community, famous for its tolerance, celebrate Advent, if not with a blasphemous provocation,” outraged Internet users commented on the latest cover of the German queer magazine “Siegessäule Magazin”, which featured a special LGBTQ ambassador to the European Parliament. Activist Riccardo Simonetti poses on it for the role of the bearded Mother of God, and the Holy Family is presented as a same-sex couple. “Very boldly, now we are waiting for the transsexual Muhammad,” commenters add.

Mary with paint in the LGBT clip with Rabiej and Biedron

Riccardo Simonetti is a Berlin-based activist and European Union goodwill ambassador dealing with the LGBT community.

The man appeared on the cover of the December issue of “Siegessäule Magazin”, a German magazine for queer circles. He poses for photos with thick stubble on his face, in a white robe and a blue veil on his head, holding a doll depicting Jesus in his hands. The whole thing clearly refers to the figure of Mary.

The more that in another of the photos Simonetti appears with another man, a the photo in rainbow colors symbolizes the homosexual Holy Family.

“If we ignore the fact that Jesus was not white, we can believe that Our Lady had a beard, why not?” – said the activist, publishing the cover session on the web. In his entry, he also accused the “global mainstream” of homophobia in the perception of people with AIDS.

Internet users are outraged by the behavior of the LGBT ambassador to the European Parliament against Christians. In comments on social media, they protest against the blasphemous photo shoot.

One commenter challenges the activist to present himself as the “rainbow” Muhammad next time.

“If he had introduced Muhammad in the same way, Muslims from all over Europe would take to the streets. But they hate Christians and at the same time they fear and respect Muslims, so it will never happen, ”says another internet user.

A moving video. The old lady kissed the feet of the LGBT activist

An unusual situation occurred during the protest against the campaign on Radio Maryja. One of the older women approached an LGBT activist who …

“I feel sorry for you that you have to resort to this kind of blasphemy to get attention. May the Lord have mercy on your soul, “writes another.

They also appeared calls for Simonetti to lose his role as EU LGBT ambassador.

The information on his website shows that became a special envoy on LGBT issues in the European Parliament in 2021.

Let me introduce you the #LGBTQ ambassador of the European Parliament.

How else could the famously tolerant and respectful rainbow community celebrate advent if not with a blasphemous, pointless provocation?

Share this & use #RespectAdvent to call for Simonetti’s resignation. pic.twitter.com/2PFcdVJqvl

In the comments under the transactivist’s post on Facebook, Internet users ask why they dare not laugh at their mother and add: “Show some respect if you expect it yourself.”

“It’s inappropriate, insulting and disrespectful. What happened to inclusiveness? I’m sure Christians or non-traditionalists are offended by this. It’s exactly the same as if someone posted homophobic content. The only difference is, in that case, Facebook would already have blocked the post and suspended the publisher’s account. And I believe that would be perfectly correct. So why has this image not yet been censored? ” – summarizes another commenter.

See also: Nergal with a shoe in the image of the Virgin Mary. Shocking court decision

Videogames entered his life in the late '80s, at the time of the first meeting with Super Mario Bros, and even today they make it a permanent part, after almost 30 years. Pros and defects: he manages to finish Super Mario Bros in less than 5 minutes but he has never finished Final Fight with a credit ... he's still trying.
Previous Sunday with an individual competition (starting list)
Next Minimum wage 2022 higher than planned. The employer cannot pay less – a net calculation [5.12.21]