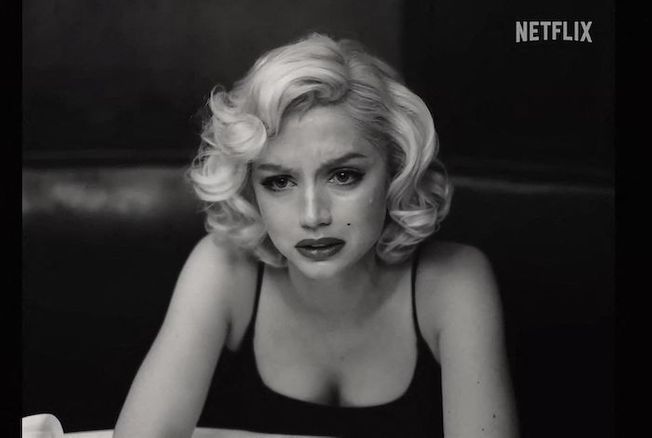 I have always found it difficult to watch a biopic on the lives of rock stars, pop stars or actors who have made the history of cinema who have recently died: so that a work can be created that tells the story of the mark left by characters who have influenced customs, fashion, the opinions and desires of the global population, in my opinion it is appropriate to allow the necessary time to pass so that the symbol of that character settles down and crosses history autonomously, to then be taken up, reconstructed and described by the authors of cinema, literature, music and so on.

One such character is Marilyn Monroe. I’ve never watched a movie about her life because she died too recently. All the posters and trailers seem to me nothing but dull reflections devoid of content and personality, all the actresses unable to wear the face and soul of a controversial woman like Marilyn.

In my research as a cinephile a few days ago I came across some criticisms of the film “Blonde”, in which Marilyn is played by Ana de Armas, an actress unknown to most, whom I personally got to know for an almost irrelevant interpretation in “Knock knock” with Keanu Reeves.

Well, I was so stupid that the almost unanimity of the critics agreed on deeming the film “the worst of 2022”, “silly” and the like, to the point of deciding to watch it in contravention of my rule.

The vision went so far beyond my expectations that it turned out to be an unexpected surprise.

The protagonist seems to have had a real transference, she is so similar that in some scenes I struggled to distinguish her from the real Marilyn. The resemblance is not simply in her face, body or beauty, but in something vibrant and impalpable to the bodily eye, to leave astounded.

There is no mere aping of Marilyn’s movements, smiles, walk, lipstick as millions of doubles and copies have done. The director managed to describe the idea of ​​Marilyn not through the replication of her physical appearance, but through the condensation of her sadness that she has become tangible until imprinted like a liquid in the film and permeate every scene.

I find that the film, exquisitely dramatic, critics didn’t like for a simple reason: it doesn’t align with single thought. It is a controversial film above all because it has the courage to describe abortion freely, without filters and bulkheads.

In a Western world where it is not allowed to express an opinion that conflicts with that of the majority, where one is accused of being obsolete, bigots, “fascists” when one allows himself to differ from the broken record of the media, this film invites us to reflect on the suffering , on the lack, on the discomfort a woman can feel when she has to have an abortion.

It is a film that does not want to be seen because our society is slowly forcing us to refuse humanity to the unborn child, to consider it a mere content of the uterus until a certain date imposed by the law, forcing us not to explore ourselves, to consider given a concept without question.

In this obscene and delusional circus that makes violence, nihilism and imposed order its leitmotifs, there can be no place for a film in which condolences are given to a woman for the loss of her child following an abortion.

That’s why “Blonde” will not be successful and will not be remembered: it is too uncomfortable and tiring to look inside and explore us, because it would be shocking and disappointing to see what monsters we have become.

Signed: not a film critic, but a spectator, therefore a member of the public.

David Martin is the lead editor for Spark Chronicles. David has been working as a freelance journalist.
Previous Cinema Margherita of Cupra Marittima, the programming from 5 to 10 January
Next Five romantic holiday movies