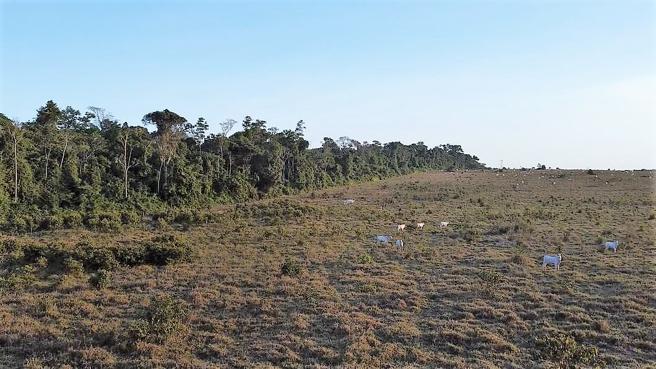 Beef from the Amazon to Italy – Corriere TV

In Europe and Italy, shipments of beef from the company that has among its suppliers breeders who have occupied the pastures of the indigenous MyKy in Brazil

Beef coming from deforested areas in indigenous territories in Amazonia continue to reach Italy through hundreds of shipments a year, according to commercial data obtained as part of an international journalistic investigation, coordinated by Bureau of Investigative Journalism.

I’m over 1000 traced shipments of beef which reached the ports of Livorno, Genoa and Vado Ligure between 2014 and 2022, starting from the company’s slaughterhouse Marfrig of Tangará da Serra, in Mato Grosso, in the heart of the Brazilian Amazon, which has among its providers farms that have occupied indigenous areas with pastures, where the forest once stood.

“We used to live in that area, then came the whitesthey took our land and the forest “, says Paatau Myky, craftswoman, exponent of the indigenous group of Myky. The group lives in the southern part of Mato Grosso, Brazil, and until the 1970s was one of the few left without contact with the rest of the world.

In the following years the what’s this have changed a lot. Already in the 1980s the first pastures appeared, but today the territory of this population has ended up in the expansionist aims of theagribusinesswith companies taking over land, deforesting and setting up pastures and monocultures.

According to data from the Brazilian rural management system (Sicar) elaborated by the National Indian Foundation (Funai), in 2022 there were 142 private lands registered within the Myky territory.

“In that area we used to pick up the tucum to make ropes for our nets, while today it has become a place for the breeding of livestockSays Paatau, referring to one fazenda which rises not far away, surrounded by a metal mesh.

Today the Myky are fighting one legal battle before the Brazilian supreme court to have their rights in the territory recognized, guaranteed by the Brazilian constitution but not protected as a result of a controversial legislation on the right to land passed in 2021 by the government of the president Jair Bolsonarowhich in recent years has in fact encouraged the employment and transformation of indigenous territories into agricultural land.

Where does the meat go?

The meat coming from the pastures that arose in the Myky territory also arrives in Europe through the exports of a slaughterhouse of the Marfrig company, which is located in the same region as Tangará da Serraabout 5 hours drive away.

Marfrig is one of the main companies in the meat sector in Brazil, with 32,000 employees and a turnover in 2021 of around 15 billion dollars. Only in factories in South America it slaughters approx 5 million of cattle per year.

Although the data on the providers of the single slaughterhouses of the company are not public, through some documents commercial cross-referenced with livestock transport data, it was possible to verify that the suppliers of the Marfrig slaughterhouse in Tangará da Serra include some companies located in the Myky territory. Among these, for example, the company Cascavel delivered livestock to Marfrig in 2019. The company did not respond to a request for comment.

Marfrig, on the other hand, replied by appealing to the controversial legislation of the Bolsonaro government, claiming to “consider indigenous land only that approved by the president.” However, the company has renewed its own I commit to mitigate any link with illegal deforestation.

From the Amazon to Italy

A database that we have viewed for the drafting of this article reveals that the Marfrig slaughterhouse in Tangará da Serra between 2014 and 2022 exported beef – typically frozen – to several producers around the world, in particular China And Europe (Italy, Germany, Spain, the Netherlands and the United Kingdom), for a total value of over 1.1 billion euros.
As for Italy, between 2014 and the first half of 2022 there are more a thousand shipments departed from the Marfrig slaughterhouse in Tangará da Serra, for a total of over 25 thousand tons, which reached the Italian ports of Genoa, Livorno and Vado Ligure, imported on behalf of very few Italian companies in the meat sector.

Despite the repeated inquiries that in recent years have denounced the link between cattle breeding in Brazil and deforestation in the Amazon, Italy continues to be by far the main importer European beef and leather from Brazil and has not adopted specific policies for counter import of these raw materials at risk from the main “green lung” of the world.

In Italy, Brazilian beef is mainly used to produce Bresaola della Valtellina and canned meat, with a small slice destined for the world of catering.

The Marfrig slaughterhouse in Tangará da Serra is also present in the list of suppliers of the multinational Nestlé, published in the site of the company itself. Nestlé uses beef for some lines of baby food and pet food, but has long been committed to completely eliminating deforestation-related raw materials from production by 2022. The multinational replied to this investigation by saying that it “phased out»Marfrig as a supplier already in 2021, and therefore the Brazilian company will not appear in the next annual update of the supplier list.

On 13 September the European Parliament voted in favor of more stringent measures to be included in a legislative proposal to counteract the import of raw materials linked to tropical deforestationsuch as palm oil, soy, beef.

Videogames entered his life in the late '80s, at the time of the first meeting with Super Mario Bros, and even today they make it a permanent part, after almost 30 years. Pros and defects: he manages to finish Super Mario Bros in less than 5 minutes but he has never finished Final Fight with a credit ... he's still trying.
Previous Empoli-Milan: Rebic-goal, but the throw-in causes Zanetti and Pioli to fight. Tonali: “I was smart”
Next Tonight on TV 2 October 2022, programs, films, Rai, Mediaset, Sky