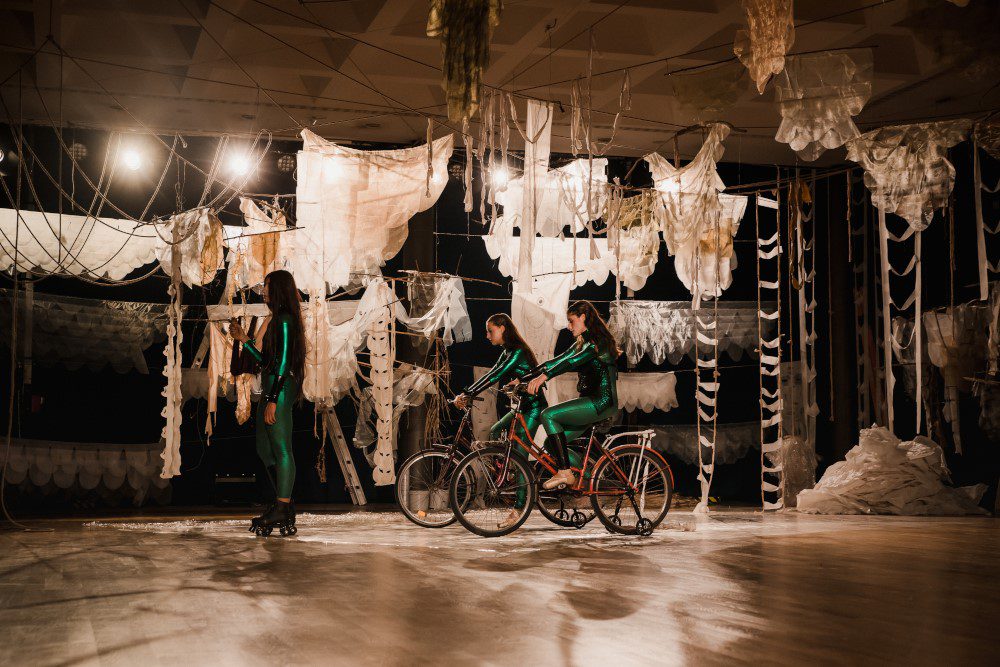 A project supported by Trust for Contemporary Art
With the support of Istituzione Bologna Musei | MAMbo, National Art Gallery of Bologna, Palaexpo Special Company – the Slaughterhouse | Take Care Project
In collaboration with Ateliersi

Bologna, 11 May 2022 – Stultifera is a great performative work conceived by Benni Bosetto on the occasion of ART CITY Bologna 2022 which finds space in Hall of the Incamminati from the National Picture Gallery of Bologna. The work takes up the subject of The ship of fools by Sebastian Brant, a satirical work that appeared in 1494, overturning his moral criticism and reflecting instead on the potential of the ‘madman’, on his absence of fear and therefore on the generative dynamics inherent in this instinct.

The scene takes place on the deck of a ship destined for an endless journey. Large sails frame the space that, among marine debris, ropes and ropes, hosts the entire narrative.
Passengers interact within an artistic pastiche in which fragments of theatrical and cinematographic works, classical and folkloristic musical compositions, references to medieval court dance, to amateur dance, to propitiatory dances and finally to happenings and body art, take on a new shape.

The artist stages continuous formal contrasts, between disgusting and sublime, refined and vulgar, fascinating and disgusting, through which the body is observed and employed following different categories and aesthetic ideals that are allowed to collapse in the uninterrupted flow of the narrative. Formal codes of the past are thus understood as a material culture to be reshaped, using the ontological space of performance as an open territory in which to rethink pre-existing categories and enter a pre-historical sensory chaos that makes the tragic but cosmic experience of madness tangible. Contradiction, instinct, empirical knowledge are the laws of this ship of fools which instead of failing and sinking as in Brandt’s original work, becomes the place to think about a new origin, a different beginning for the human being. So where to start again? How to rethink the beginning beyond the catastrophe? The scenario that seems to take shape is that of a new coexistence, which from the cacophony of dances, rites and battles, allows reflections on the interdependence of the human being with other species to emerge.
Within the cycle ARTALK CITY. Meetings at the Academy with the artists of the Main Program promoted by the Academy of Fine Arts of Bologna on the occasion of ART CITY Bologna 2022, Sunday 15 May at 10.30 am Benni Bosetto converses with Caterina Molteni (curator) e Cecilia Canziani (curator and teacher) in a meeting open to the public that takes place in the Aula Magna (via delle Belle Arti, 54 – Bologna).
Admission is free while seats are available.

Benni Bosetto (Merate, 1987), lives and works in Milan. She graduated from the Brera Academy of Fine Arts in Milan and studied at the Sandberg Instituut in Amsterdam.
His artistic practice investigates the human condition by probing the role of rituals in today’s society. Abandoning the traditional notions of time and space and using a pre-logical visual language, Bosetto appeals to an unconscious collective memory, re-reading the concept of vaporization of the body and loss of identity, its transcending the space-time dimension, making itself the image of a perennial becoming and movement. In his works the corporeality dissolves, becoming part of other species, other genres and other times that are held and linked in an eternal tale. Reality breaks down into an assembly made up of multiplicity, to reaffirm that the human being is first and foremost compost, being-with-others.
Among the recent solo exhibitions: Tête en l’air (Campoli Presti, Paris, 2022); 00 0 00 (ADA, Rome, 2021); The porch (Almanac, Turin, 2020); Environment X (with Ksenia Perek, Kunstraum, London, 2019); The Little Witches (Battaglia Foundry, Milan, 2018); Art Verona Collateral Project (ADA, Rome, 2017); Florida (Tile Project Space, Milan, 2016).
Among the recent group exhibitions: Picta room (Civic Gallery of Trento, 2021); I say I, I say (National Gallery of Modern Art, Rome, 2021); Quadrennial of art 2020 OUT (Palazzo delle Esposizioni, Rome, 2020); Waves Between Us (Palazzo Re Rebaudengo, Guarene, 2020); # 80 | # 90 (Villa Medici, Rome, 2019); Artissima Special Project (curated by Lucrezia Calabrò Visconti and Guido Costa, Turin, 2019).
The residences include: Battaglia Artistic Foundry (Milan, 2018); VIR Viafarini (Milan, 2014). You have received the Pollock-Krasner Foundation Grant in 2020, the Fiera Milano Foundation Award in 2019 and the Termoli Award in 2018.
ada-project.it/benni-bosetto/

Equidistant and impartial information, offering a voice to all sources of information

David Martin is the lead editor for Spark Chronicles. David has been working as a freelance journalist.
Previous Taylor Swift is confirmed in the cast of the movie “Amsterdam” |
Next newspaper compares numbers with Cristiano Ronaldo and is tough when analyzing 1st year of star at PSG