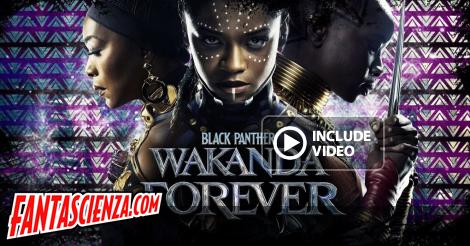 T’Challa is officially dead and Namor arrives bringing war from the ocean, and that’s just the beginning. But someone arrives, picking up the Black Panther baton. And there is also a particular surprise

The wait is over, today November 9 in Black Panther: Wakanda Forever the mystery of who is hiding in the new Black Panther armor will be revealed, even if the fact that it is visibly a female silhouette leaves room for very little doubt. But what is about to happen in the kingdom of Wakanda?

The kingdom is performing solemn funeral rites for the passing of T’Challa (in an intentional reference to the disappearance of Chadwick Boseman) but after the decision was made to open the borders to the world, they immediately find themselves facing new enemies: Namor (Tenoch Huerta) emerges from the ocean animated by a desire for revenge. In the new teaser you see above Okoie (Danai Gurira, The Walking Dead) declares that he has superhuman strength and M’Baku (Winston Duke, Spenser Confidential2020, on Netflix) wants to find and kill what he calls the fish man.

But not only is Namor the new adversary, other enemies are also arriving from the outside world and it’s time for a new Black Panther who as you can see above, is definitely a woman.

I wanted to contribute my voice, even if it’s just a few bars. I’m very attached to Black Panther and I wanted to give my personal tribute to Chadwick Boseman

Emphasizing the extraordinary interpretation of the late actor and how representative he was for the new generations. He also donated his salary to Mediacinema Italia Onlus, a long-standing charitable partner of the Walt Disney Company Italia.

Black Panther: Wakanda Forever which also sees the presence of Dominique Thorne in the role of Riri Williams / Ironheart who will then have a solo series on Disney +, debuts today November 9 in our cinemas, we leave you with the most recent trailer in Italian and in the original language and the featurette presented by director Ryan Coogler.

David Martin is the lead editor for Spark Chronicles. David has been working as a freelance journalist.
Previous Emma Myers (Enid Sinclair) willing to play Spider-Gwen in a live action
Next Why will Argentina win the World Cup? Messi has resolved his discomforts and is stronger on penalties – Corriere.it