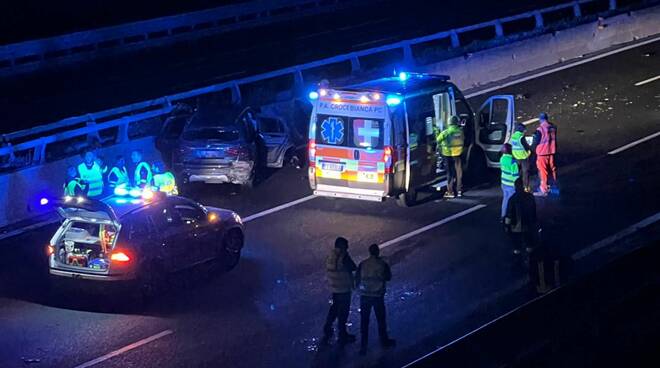 Car in the wrong direction in A1, tragic collision in Pontenure: one dead

A tragic road accident occurred in the early evening of 26 October along the Piacenza section of the A1 motorway, near Pontenure, heading south. One person lost his life in the impact and another was seriously injured, transported to the Parma hospital with the night helicopter. From initial information, three vehicles are involved, one of which allegedly took the motorway in the wrong direction, but the dynamics of the accident are still to be clarified. It seems that the driver of the car in the wrong direction (who died in the accident) took the motorway in the wrong direction at the Fiorenzuola motorway. Several cars would have managed to avoid the impact before the fatal collision at Pontenure.

Rescuers intervened on the spot with two White Cross ambulances, the 118 medical and nursing cars, together with the firefighters with three vehicles and the Guardamiglio traffic police officers. The intervention of the helicopter rescue from Bologna is also required. The motorway was closed between the end of the Piacenza coplanar and the branch for Fiorenzuola in the direction of Bologna: long queues, starting from Basso Lodigiano, due to the mandatory exit at Piacenza sud. The inconveniences along the ordinary roads are also heavy.

Videogames entered his life in the late '80s, at the time of the first meeting with Super Mario Bros, and even today they make it a permanent part, after almost 30 years. Pros and defects: he manages to finish Super Mario Bros in less than 5 minutes but he has never finished Final Fight with a credit ... he's still trying.
Previous Zhang: “I’m not dealing with the sale of Inter. We are winning and I want to keep Skriniar “
Next Il Vescovado – Boom of presences in Maiori in this final of October: merit of the seasonal adjustment?