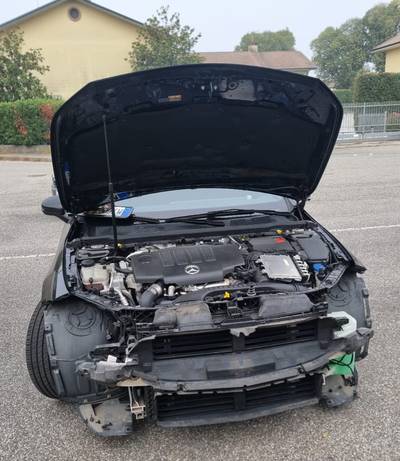 If the car market is in crisis and even fewer spare parts are “circulating”, the thieves will take care of supplying them.

Even the steering wheel was taken away, the criminals who disassembled three cars between Wednesday night and Thursday in the residential area behind the Conad supermarket in Codogno.

Among the vehicles torn to pieces there is also a brand new Mercedes CLA Class: the dream of a lifetime for the owner, who bought it six months ago putting his savings aside and woke up yesterday morning with a bitter taste. surprise. Ever since he had bought the car, the man had always been careful to put it in the garage. And he was willing to do it on Wednesday night as well. But after two days of running between work and the hospital, he had postponed the operation “until after” a relaxing moment in front of the TV.

Except that he collapsed from exhaustion and the car remained parked in the street. A temptation for the criminals, who in front of the “bodywork jewel” did not hesitate to open it like a can of tuna and remove the body, the steering wheel, the seat back and the bumper.

Not disdaining even a pair of new shoes, still in the box, given to the unfortunate by a family member. Then the thieves replied on two other cars parked in the neighboring streets. All without anyone hearing a suspicious noise. Yesterday morning the robbed could hardly believe their eyes.

And someone cried in front of their cannibalized car. To the point of wondering why not to steal it at that point, instead of struggling to take it apart with the risk of being discovered.

Then the motorists could not help but go to the barracks to report the fact, each discovering that he was not the only one who ended up in the crosshairs of the thieves.

The Carabinieri of the Codogno company carried out the surveys and started the investigations. In all likelihood, the perpetrators of the vehicle assault are professionals.

A gang specializing in shots of this type, who knew who to sell the parts of the looted cars to.

After all, it is nothing new that the car market has been going through a severe crisis for some years now.

The delivery times of new cars make you shiver and are no less than those of spare parts.

The fault would be the shortage of “semiconductors” which began in times of pandemic and now protracted from the war at the gates of Europe. A context in which thieves do business.

He likes dogs, pizza and popcorn. Already a fanboy of Nintendo and Sony, but today throws anything. He has collaborated on sites and magazines such as GameBlast, Nintendo World, Hero and Portal Pop, but today is dedicated exclusively to Spark Chronicles.
Previous In medicine, the dream is no longer surgery. As a young doctor I know why
Next Tesla Model Y, is a phenomenon: Europe’s best-selling car in September