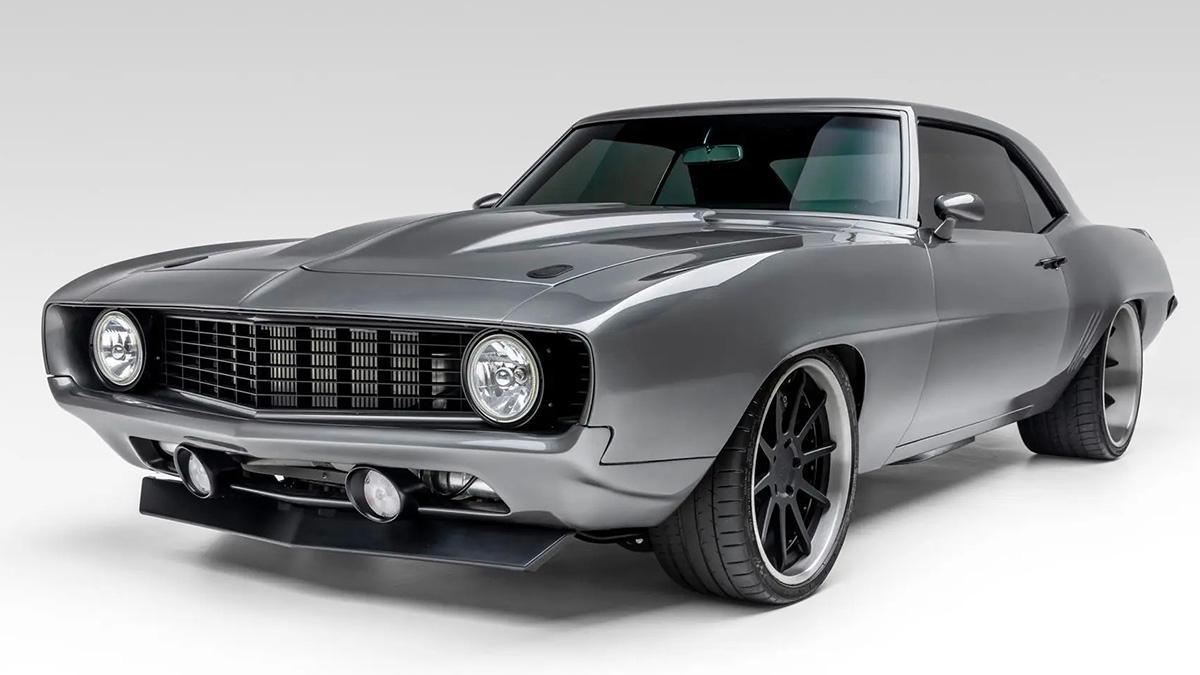 The design is that of the first generation registered in 1969, but from the air suspension to the twin-turbo engine and the gearbox we are on a very up-to-date sports car.

Ford Mustang, Dodge Challenger and Chevrolet Camaro, the trio of possible American wonders, powerful cars but within the reach of the desires of many. So it was the first to arrive, Ford Mustang in 1964, and then for the others, which became popular icons. Remained in a collective imagination where the competition can only be between them, between past and future. The Californian Sos Customz of Oceanside seems to respond to the new and seventh generation of Mustangs, with a restomod dedicated to Chevrolet Camaro, but that of 1969, inevitably the splendid first generation original.

Better than the unicorn

In the legend there is the Camaro Copo 427, year 1969 and initials that stood for Central Office Production Order, a special series with a 427 cubic inch V8 engine, or 7 liters of displacement for 425 hp, 4-speed manual gearbox and limited slip differential. It is still today the unobtainable and almost priceless unicorn among the Camaros, which in the meantime has reached the sixth generation and placed the very sporty ZL1 version with a 650 HP supercharged 6.2-liter engine at the top of the range.

Sos Customz went back and forth together, choosing for its restomod a V8 engine of that displacement, the small block Lsx 376, but bringing it to 700 hp and combining it with the six-speed manual gearbox developed by the world specialist Tremec. In addition to the dual supercharging, there is also an advanced air-to-air intercooler, all this to enhance the reactivity and thrust of the rear wheels. There is no shortage of Ridetech-branded air suspension and a new Wilwood braking system with six-piston front calipers, well positioned behind forged two-tone rims and Michelin Pilot Super Sport tires.

No indication on the final price by the Sos Customz, but great tact in the aesthetic interventions on a body that is already magnificent, proportionate and gritty. The bonnet, now in carbon fiber, has an additional camber that allows the gigantic engine to be housed in the bonnet, the headlights are Led both at the front and at the rear, while the red leather interiors are perfectly matched to the exterior paint in color. Shark Gray Metallic. No information even on consumption, but just in case a lot of irony. On Instagram Sos Customz comments on the photo of his Camaro: “Not miles per gallon… smiles per gallon“. Don’t talk about miles per gallon of gasoline, if anything, smiles per gallon.

He likes dogs, pizza and popcorn. Already a fanboy of Nintendo and Sony, but today throws anything. He has collaborated on sites and magazines such as GameBlast, Nintendo World, Hero and Portal Pop, but today is dedicated exclusively to Spark Chronicles.
Previous Holidays in the mountains: the best experiences for summer 2022
Next LNP Super Cup. Vanoli scrambles Cantù (77-60) and flies to the final with San Severo