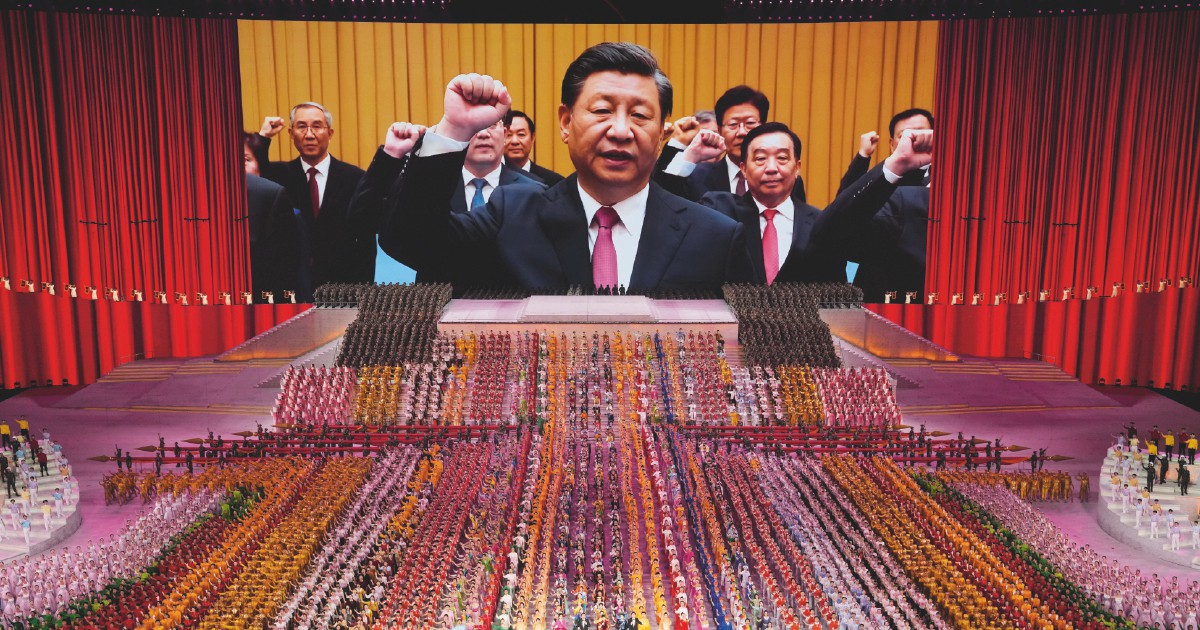 China, all with Xi Jinping: the most homogeneous leadership of the last twenty years is born from the Communist Party Congress

Political reshuffle, which shapes the leadership of future years, and the line enunciated in the report of the general secretary. These are the two main elements that characterized the congress of Communist Party of Chinawhich after a week of work confirmed the third term of Xi Jinpingmore and more supreme leader.

The new leadership – Let’s start with the first element. The new composition of the Politburo Standing Committee, that is, the supreme leadership of the Chinese Communist Party, did not reserve any surprises. Around a Xi Jinping more and more “core”, there are seven names that have been circulating for days. They are all men, between the ages of 60 and 69 of the same Xi, they are all linked to him by political affiliation and also long-standing personal relationships. Two were already present in the previous one Standing CommitteeI’m Zhao Leji (number 3 in the hierarchy) and Wang Huning (4). The first, 65, is officially in charge of the internal discipline of the Match. More interesting is the second, 67, who goes on to be the theorist behind the scenes, the man who inspires the “thought of Xi Jinping on socialism with Chinese characteristics for the new era ”, the leader’s eponymous theory, already included in the party statute. The hierarchical order suggests however that Xi Jinping he will remain in power not only for the next five years, but for the next ten. In 2032 he will be 79 years old, like Biden today, and if the American can imagine if he can’t the “people’s leader”.

Five of the seven who entered the room of the buttonsthey should in fact retire due to age limits (which do not concern Xi) at the next congress, that of 2027. There is only one representative of the sixth generation, the one that in theory should have succeeded the current leader. It is about Ding Xuexiang (number 6 of the hierarchy) – the first member of the Committee born in the 1960s (1962) – who in 2019 wrote an essay on the importance of “strengthening the authority of the Central Committee of the Party and centralized and unified leadership”, that is, in a nutshell, of Xi Jinping. Ding is likely to become number 2 in 2027, thus leaving a Xi the highest position. A more precise indication will come if, to the next Lianghuithat is, the double session of Chinese parliaments (generally held in March), he will be appointed vice-premier.

From this congress it emerges as number 2 Li Qiang63, who will probably also become premier of the R.People’s Republic of China during the Lianghui. In this case, there would be an exception to the rules, because Li Qiang – which replaces the outgoing number 2, Li Keqiang – has never been vice-premier and has only experience of local government, as party secretary in Shanghai. Evidently the disastrous management of the pandemic – remember the two-month blockade of the city – did not affect its rise, a sign that the issues of merit have taken a back seat. Of course, it is said that Li has skills in the technological field, but he is above all a loyalist of Xi Jinping, like everyone else, after all. At number 5 there is Cai Qi – party secretary in Beijing – and at number 7 Li Xi, leader of Guangdong, who would even be a personal friend of Xi Jinping since his youth.

It is certainly there leadership more homogeneous than the last twenty years, the only affiliation common to its members is that with Xi Jinping. The retirement of the former number 2, Li Keqiangand of the former number 4, Wang Yang – which many indicated instead as a candidate for the second hierarchical position behind the leader in the new Standing Committee – leave no doubt. Just as the exclusion from the Politburo – the body of the 25 highest officials – of Hu Chunhuathe most accredited member of the sixth generation, believed to be a possible heir of Xi Jinping: demoted, out of the big circle.

This total hegemony of Xi Jinping in the internal equilibrium it also refers us to what everyone has been talking about, that is, the accident Hu Jintaothe 79-year-old former leader who was “escorted” out of the Great Hall of the People during the last session of Central Committee. This story deserves an entire article, here it is enough to emphasize that at the time of writing both interpretations appear plausible: that Hu was not well either physically is mentally and was therefore induced to leave the room; that the former leader had been unpleasantly surprised by the composition of the new leadership and was intent on staging some form of sensational protest that would break the prepackaged ritual.

The political contents of the Congress – The Chinese media have insisted a lot on the concept of modernizationthat is xiandaihuaword pronounced by Xi Jinping 171 times in its commencement report, then adopted by the party at the end. Between now and 2035, the China it will therefore have to carry out “full modernization”, an intermediate step deemed necessary between the already achieved “first centenary” (2021), when it has become “a moderately prosperous society in all respects”, and the “second centenary” (2049), when , at least in the intentions, it will become a “strong socialist, democratic, civil, harmonious and modern country”, thus bringing about the “rejuvenation of the Chinese nation”. The concept of modernization is absolutely not new, we can say that the whole journey of the Communist Party of China until today is a tension towards the future. But for the first time, perhaps, modernization has been clearly systematized.

It is above all a “modernization socialist with features Chinese”, Therefore different from the Western capitalist one. It has at its center the Communist Party, which performs an exclusive function of guiding to keep together one billion and 400 million Chinese people more or less stretched towards the final goal. In the report of Xithe xiandaihua it is the “modernization of a large population”; “of the prosperity shared for all “; “Ofmaterial advancement and ethical-cultural “; “Of the harmony between humanity and nature”; “Of peaceful development”.

In particular, gongtong fuyu – shared prosperity – was uttered 16 times by Xi Jinping in his report. Nothing, in comparison to more terms phagocitants (development, 239 occurrences; socialism, 232), but the insistence on redistribution is confirmed by the frequency of other terms, such as employment, equality, social security, as well as all those that define the city-country relationship. There shared prosperity – theoretical contribution of Wang Huning reaffirmed by Xi in the last year and a half – it thus seems to be alongside others priority: lo development as the red thread of the last 40 Chinese years and then security, pronounced 91 times, in whose semantic field we can also include stability (20) and risk (16), plus all terms relating to the Defence. Security – political, military, energy, food – has for some years been considered an essential condition of development. Then there is another key term repeated over and over, that is quality (43 times), which are to be placed side by side cultureinnovation, science, technology, talent. The count of occurrences – a sport practiced by all observers – serves to see in which direction the center of gravity of the Chinese public discourse, of the slogans and therefore also of the collective imagination moves in the future. It is probably more useful than the logical thread itself, which often pays too much tribute to party rhetoric.

Development-security-quality-shared wealth: keeping these priorities together by creating a virtuous circle is the problem of problems, exacerbated by the many “turbulences”, internal and external, of our times: the slowing economy, the Covid, the real estate crisis, on the one hand; the multidimensional conflict with Usethe war in Ukraine, the climate emergency on the other. Evidence that this is “the” point is provided by US policies towards Chinawho seem to be systematically targeting four o’clock priorityone by one, to break the potential virtuous circle: clip Chinese development with provocations and military pressure (against security), with sanctions which mainly concern thehigh tech (the quality) and with policies which penalizing the Chinese economy (development), penalize the material basis of the work and redistribution (shared wealth). All seasoned with the firepower of the univocal narrative by the Atlantic media, which continue to present China as a threat according to the “democracy-autocracy” opposition.

Against this background of perspectives striking and important concerns, the “spirit” of the relationship also ranks Xi Jinping and of the congress in general. On the one hand, to counter the rhetoric about the “yellow danger”. A constant reiteration that Chinese growth is “peaceful”: even up Taiwan, the official line is that peaceful reunification remains the preferred option and that the eventual use of force would be directed only against external and internal forces pressing on the accelerator of formal independence, never against Taiwanese “compatriots”. On the other, Xi Jinping seemed to brush up on the old party spirit of struggle, with a very combative, almost martial language. Here are just a few examples: the Match “It has a century of struggle behind it”; “We must have the courage to fight and do it well”; the one against the epidemic it is a “people’s war”; and then of course it takes “strong determination and great ability to oppose separatism Taiwanese“. That is, beyond the contents expressed in the hour and forty of his speech, it is as if Xi had put on the zhongshan zhuang – the jacket of Mao and Sun Yat-sen – to mobilize and guide the people towards the enormous challenges that await China in view of that 2049 in which “the great rejuvenation of the Chinese nation” must be achieved. That is one China not only rich, but also strong and respected in the world.

Videogames entered his life in the late '80s, at the time of the first meeting with Super Mario Bros, and even today they make it a permanent part, after almost 30 years. Pros and defects: he manages to finish Super Mario Bros in less than 5 minutes but he has never finished Final Fight with a credit ... he's still trying.
Previous Live Paris Saint-Germain – Maccabi Haifa: 7-2 Champions 2022/2023. Live the match
Next the Sky TV series with Alicia Vikander (and Kristen Stewart!) – The Wom