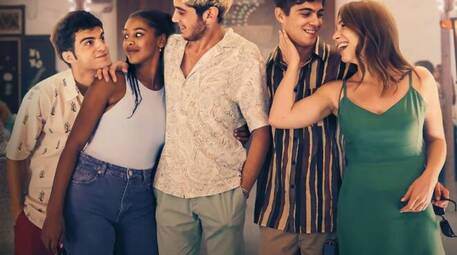 (ANSA) – NAPLES, 04 JUL – From ‘stand up comedy’ to cinema: Davide Calgaro will be awarded the Ischia Carlo Vanzina Award of the twentieth Ischia Global Film & music festival, a special edition aimed at the future of the show that renews the tribute to director who passed away in 2018 in the name of the innovators of Italian comedy. The award in Calgaro will be delivered on 11 July, accompanied by the preview of his latest Netflix film “Under the Amalfi Sun” directed by Martina Pastori, who uses the screenplay by Enrico Vanzina (released on 13 July). Great return of Netflix to Global: in fact also special screenings of ‘The Gray Man’ by Anthony and Joe Russo with Ryan Gosling (out July 22) and of ‘Tick, Tick … Boom!’ with Andrew Garfield, a guest on the island. In the cast of the film set on the coast of Campania Calgaro will be Furio (character already played in ‘Under the sun of Riccione’) alongside Lorenzo Zurzolo, who is also expected, Luciano Martino, Isabella Ferrari, Luca Ward, Kyshan Wilson, Nicolas Maupas, Andrea Occhipinti , Raz Degan. Calgaro, from Milan, 22 years old in August, grew up between the Zelig Laboratories and the Milanese cabaret companies. Five years ago he debuted on Comedy Central, continuing with Zelig, Colorado and a hit live. for the cinema he also shot ‘A breath of fresh air’, “I hate summer”, “The voices alone”. The recognition in memory of Carlo Vanzina, former Ischia Legend Award and great supporter of the Global festival, intends to reward young talents and in past editions has been assigned to Pio and Amedeo, Stefano Fresi and to the American Zoey Deutch, Paolo Ruffini, Pietro Castellitto and Michela Giraud. Ischia Global, produced and founded by Pascal Vicedomini, chaired for the 2022 edition by the Irish director Jim Sheridan and by the English producer Trudie Styler, honorary president Tony Renis, is made with the support of the DG Cinema and Audiovisual of the MiC and the Campania Region and is promoted by the Ischia international art academy. (HANDLE).

David Martin is the lead editor for Spark Chronicles. David has been working as a freelance journalist.
Previous Ramona Rox is the attraction of the Gabriel Joaquim concert, in São Pedro da Aldeia, this Wednesday (6)
Next Chris Brown reveals date for deluxe version of ‘Breezy’ album