Already next year, new Intel Alder Lake-S processors should appear on the market. One of the cheaper systems in this segment is the Core i3. The first test results for the Core i3-12100 processor in the context of the AMD Ryzen 3 3300X have just appeared. The former has four cores and eight threads as well it is clocked at 3.3 GHz, while in Turbo Boost 2.0 mode it is 4.3 GHz. Its test competitor was also the quad-core AMD Ryzen 3 3100 and 3 3300X. Intel hardware was tested on the ASRock Z690 Steel Legend motherboard with 16 GB of DDR4-3600 RAM and the GeForce RTX 3060 Ti card.

Results? Well, Intel definitely wins in performance with AMD. Even as a budget system, the Core i3-12100 is doing great both on its own and in the context of Ryzen 3. Interestingly, it is not only faster, but also has a lower temperature when working with almost identical power consumption. And it also offers greater efficiency. Below you can see all the test results for both processors. 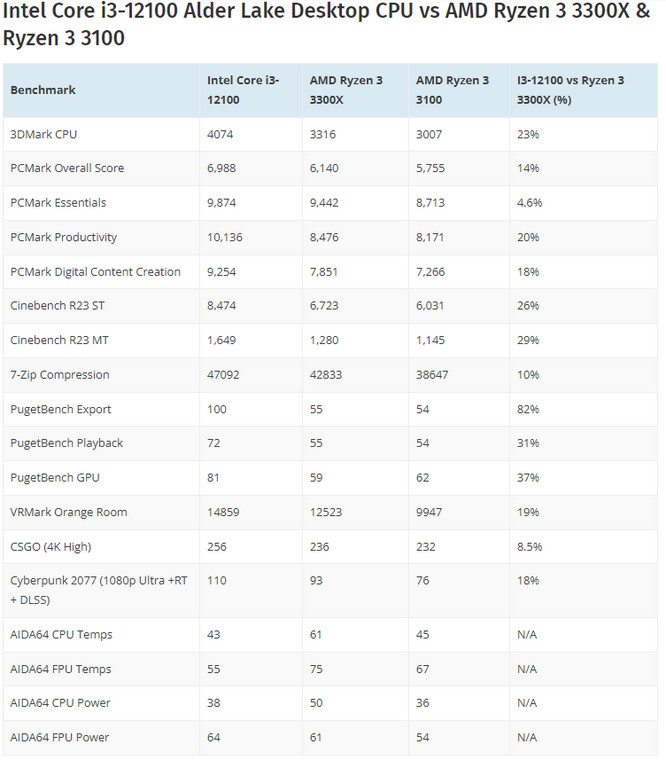 As for Intel systems, the HaxMini computer with Intel Kaby Lake on board has recently appeared on Kickstarter. By the way, it is worth adding that Intel is going to introduce new, cheap Pentium and Celeron processors to the market, which will be based on Alder Lake.

He likes dogs, pizza and popcorn. Already a fanboy of Nintendo and Sony, but today throws anything. He has collaborated on sites and magazines such as GameBlast, Nintendo World, Hero and Portal Pop, but today is dedicated exclusively to Spark Chronicles.
Previous Matt Damon and Robert Downey Jr. in Nolan’s new film
Next No trade. Is December 5 a trading Sunday? Will the stores be open?