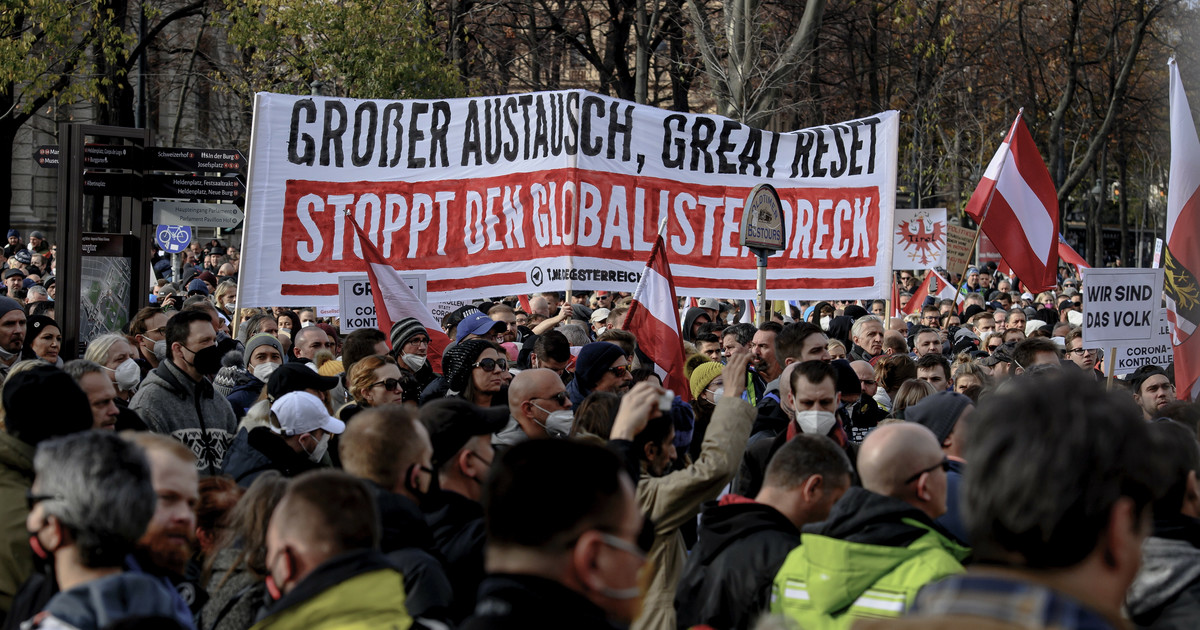 Coronavirus in Europe. A wave of protests against the restrictions

The nationwide lockdown in Austria has been in force since midnight and is initially expected to last 20 days. After 10 days, an evaluation of the effectiveness of this step will be performed. This means that the blockage will initially last at least until December 12, and for the unvaccinated – also after December 12.

Classes in schools will continue to be held stationary. Indoor use of the mask remains compulsory in schools of all levels. Office workers are recommended to work from home.

Austrian Chancellor Alexander Schallenberg stressed that the stricter measures taken in early November, such as restricting access to various public places for people who are not vaccinated or have had COVID-19 earlier than six months ago, “increased the willingness to vaccinate, but not sufficiently “. Due to the dramatic number of infections, many regions with the lowest vaccination rates have maximum occupancy in ICU.

Clashes with the police during protests in Vienna

On Saturday, approx. 35 thousand. people demonstrated in the center of Vienna against the restrictions related to the pandemic planned from Monday. Police reported at least 10 arrests and several anti-Semitic and neo-Nazi incidents.

According to the Ministry of the Interior, there were rumors of possible attacks on hospitals, editorial offices, ministries and parliament before the demonstration. “These infrastructure facilities will be specially protected” – announced the police before the demonstration. In places where there are vaccination points, the number of security service employees has increased.

During the demonstration, there was an attempt to rip a policeman’s gun out of its holster, “at least 10 people were arrested”, the media reported. There have also been at least 10 offenses relating to the promotion of Nazi and anti-Semitic ideology. “Several activists carried, for example, the yellow stars of David with the inscription” unvaccinated “and posters referring to National Socialism” – reported Puls24.

According to the Nachrichten website, people known for their neo-Nazi and far-right views, activists of anti-vaccination movements, were seen among the participants of the demonstration. “Many opponents of the restrictions and pandemic deniers came from neighboring federal states, people from all walks of life were present. Some of the demonstrators consumed a lot of alcohol. The protests became chaotic time and time again,” describes Nachrichten.

Viennese police reported on Twitter that they were forced to use pepper spray against demonstrators who threw bottles, beer cans, firecrackers and fireworks at the officers.

According to the police, about 35,000 people took part in the demonstration against the government’s restrictions and the announced lockdown. people.

Demonstrations of opponents of the restrictions in Belgium and the Netherlands

Austria is not the only country in which demonstrations against the restrictions were held over the weekend. In Belgium’s capital Brussels, demonstrators clashed with police after tens of thousands of people marched through the city center.

The protest started peacefully, but some threw stones and fireworks at the officers who responded with tear gas and water cannons.

On the other hand, riots broke out in the Netherlands for the third consecutive night. Local media reports that police arrested 15 people in the southern town of Roosendaal, where an elementary school was set on fire. Also in the city of Enschede, a state of emergency was introduced to prevent people from going out into the streets at night.

Four people who are likely to have been hit by police bullets remain in the hospital, authorities said on Sunday.

The Netherlands is under a three-week partial lockdown, which forces restaurants to close early and prohibits fans from entering sports events.

Protesters are also furious at the ban on fireworks on New Year’s Eve and the government’s plans to introduce passes for vaccinated in closed venues.

Dissatisfaction in Croatia and Denmark. Looting on a French island

Thousands of demonstrators took to the streets on Saturday also in the Croatian capital, Zagreb, and in Denmark, around 1,000 people protested in Copenhagen against government plans to order public sector workers to undergo vaccinations so that they could enter workplaces.

In turn, the French Caribbean department of Guadeloupe was shaken by three days of looting and vandalism caused by a vaccination order for health care workers and high fuel prices.

About 38 people were arrested, and a special police force was sent to the island on Sunday to quell the riots after protesters looted and burned shops.

Videogames entered his life in the late '80s, at the time of the first meeting with Super Mario Bros, and even today they make it a permanent part, after almost 30 years. Pros and defects: he manages to finish Super Mario Bros in less than 5 minutes but he has never finished Final Fight with a credit ... he's still trying.
Previous Coronavirus, Italy. COVID-19 deaths are rising, new sanitary pass is being proposed
Next SEGA and Microsoft will not create exclusive Xbox games. Super Games will go “all over the world”