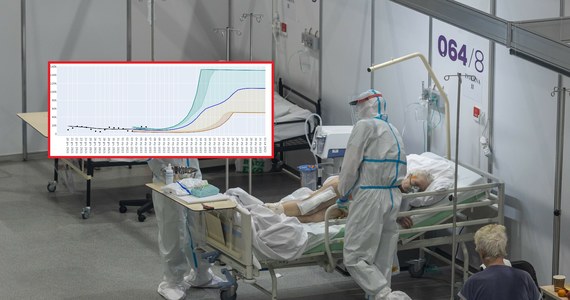 Coronavirus in Poland. The MOCOS Group predicts a sharp increase in infections. Most at the end of January

MOCOS Group (MOdeling COronavirus Spread) is an international interdisciplinary team of scientists dedicated to modeling the COVID-19 epidemic. Scientists from the Wrocław University of Technology, the University of Wrocław, the Medical University of Wrocław and experts from Nokia Wrocław, EY GDS Poland and MicroscopeIT have developed a short-term pandemic forecast until February 1, 2022.

See also: Coronavirus in Poland today on January 7. How many infections and deaths?

The published data show that the seven-day average number of diagnosed infections in Poland will be recorded sharp increase after the second week of the month. On January 14, the average of modeling will increase from the level of approx. 12 thousand. infections to an average of approx. 16 thousand infections. This will be the beginning of the fifth wave of the pandemic – the next days are the increases in the average by several thousand cases.

We present the results of short-term modeling of the pandemic development after 03/01/2022. https://t.co/ZCXDdnvsck
– MOCOS (MOdelling COronavirus Spread) (@mocos_covid)
January 7, 2022

The average accumulation of infections will be on January 29 – according to scientists, it will be over 108 thousand. cases. From then on, this number will start to drop slightly.

MOCOS also forecasts an increase in the number of deaths infected with the coronavirus. The seven-day average will decrease until January 15, but there will be a systematic increase thereafter. The highest level will be recorded on January 28 and 29 – over 680 people are expected to die of COVID-19 daily.

According to prof. Maciej Banach – cardiologist, lipidologist, epidemiologist of heart and vascular diseases, the omicron variant, which appeared in November last year, will soon dominate in Poland in terms of the number of SARS-CoV-2 infections.

– There is no doubt about that. This is shown by examples of other countries in Western Europe and the development of the pandemic in the United States, where 95 percent. Omicron corresponds to cases of infections, he emphasized.

– For example, in the USA over half a million infections are registered daily, in Great Britain about 250,000. infections, and in France, Spain and Italy over 100,000 coronavirus infection in the omicron variant per day – emphasized Professor Banach.

– I assume that soon a wave of infections will appear in Poland, where the number of infections, mainly with the omicron will reach up to 100,000 cases per day the epidemiologist warned. – If the level of testing is appropriate, because if it is smaller, there may be less detected cases, of course – he stressed. “Omicron is several dozen times more contagious,” he reminded.

– In my opinion, 100,000 cases of coronavirus infection in the omicron version per day may be the problem that will affect us at the turn of January and February this year – said Prof. Banach

Minister of Health Adam Niedzielski in Wednesday’s press conference it said that the Omikron mutation virus is definitely more infectious than others, but that its virulence is “slightly lower than that of Delta”. As he pointed out, examples from other countries show that this mutation does not cause much greater increase in the level of hospitalization. As he added, according to forecasts the accumulation of infections with Omikron will take place in Poland at the end of January.

– We prepare two-step plans. One of them assumes increasing the hospital infrastructure to 40 thousand. beds. The second, much more pessimistic, assumes that this infrastructure will be increased to 60,000. beds – informed Niedzielski.

He pointed out that we had to deal with the first scenario in the previous wave, while the second – he said – meant “a huge crisis in the efficiency of the healthcare system at the hospital level”.

– This means that nearly half of the infrastructure will be spent on fighting covid. But such a situation is a catastrophic scenario – emphasized the Minister of Health.

Portugal has started vaccinating children against the coronavirus
AFP

Videogames entered his life in the late '80s, at the time of the first meeting with Super Mario Bros, and even today they make it a permanent part, after almost 30 years. Pros and defects: he manages to finish Super Mario Bros in less than 5 minutes but he has never finished Final Fight with a credit ... he's still trying.
Previous Cezary Kulesza: Capello, Advocaat, Klinsmann? They are not on my list
Next Linux Mint 20.3: premiere. Download and use