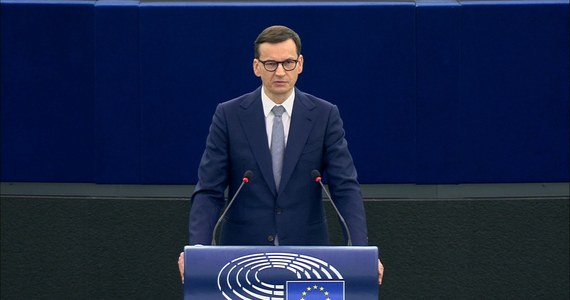 Crisis on the border. Debate in the EP without Mateusz Morawiecki

On Tuesday afternoon, the European Parliament will deal with the situation on the Polish-Belarusian border, related to the influx of migrants drawn by the authorities in Minsk from countries such as Middle East. Initially, it was announced that Prime Minister Mateusz Morawiecki would take part in the debate. Such information was included in the message of the Polish Press Agency, published on Tuesday morning.

However, as Dorota Bawołek, Polsat News correspondent in Brussels, informed, the Polish head of government will not appear in the European Parliament during the discussion. “The European Parliament did not agree to his participation, explaining that the position of the capitals was represented by Slovenia, which held the six-month EU presidency, and that the Polish prime minister already spoke at the October session,” she said.

Debate on the situation on the Polish-Belarusian border without Prime Minister Morawiecki. The EP did not agree to his participation, explaining that the position of the capitals was represented by Slovenia, which held the six-month presidency in the EU, and that the Polish prime minister already spoke at the October session. pic.twitter.com/X3g5IgHGvK
– Dorota Bawolek (@DorotaBawolek)
November 23, 2021

According to the list on the EP website, MEPs from Poland will take the floor during the debate: Ryszard Legutko (PiS), Bogusław Liberadzki (PiS), Andrzej Halicki (EC), Sylwia Spurek, Róża Thun (Poland 2050), Radosław Sikorski (EC) and Tomasz Frankowski (EC). The rest of the speakers included in the official list come from other countries or represent the European Commission or the European Council.

The prime minister, who will not appear during the debate in the European Parliament, arrived in Budapest on Tuesday, where a meeting of the heads of governments of the Visegrad Group (V4) countries of Poland, Hungary, the Czech Republic and Slovakia was organized. Prime Minister Viktor Orban welcomed Morawiecki in the capital of Hungary. The topic of the meeting of the V4 countries will also be the situation on the Polish-Belarusian border, as well as the current geopolitical threats in Europe, including threats in the area of ​​gas supplies, energy prices, cyber attacks and migratory movements caused by other countries.

“The increase in energy and gas rates in the EU is caused, inter alia, by manipulations in gas prices and supplies, which are aimed at causing an energy crisis,” the Government Information Center said.

The visit to Budapest is another in a series of meetings between the Polish prime minister and European leaders regarding the crisis on the border with Belarus. On Sunday, Mateusz Morawiecki visited Estonia, Lithuania and Latvia, where he met with the heads of governments of these countries: Kaja Kallas, Ingrida Szimonyte and Kriszjanis Karinsz.

Videogames entered his life in the late '80s, at the time of the first meeting with Super Mario Bros, and even today they make it a permanent part, after almost 30 years. Pros and defects: he manages to finish Super Mario Bros in less than 5 minutes but he has never finished Final Fight with a credit ... he's still trying.
Previous Atletico Madrid – AC Milan. Milan wins in Madrid, Liverpool remain undefeated
Next A brilliant change in Android 12. Every smartphone should have such a function