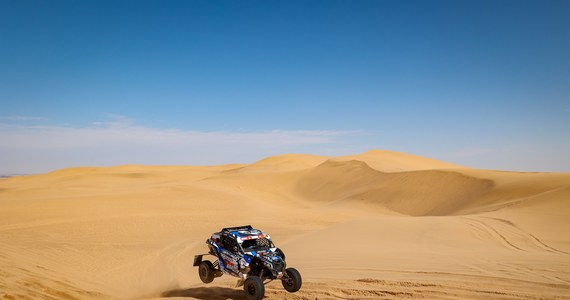 Dakar 2022. Marek Goczał and Łukasz Łaskawiec with a win in the ninth stage

IN the ninth stage of the Dakar Rally 2022 The drivers were tasked with completing the loop near the city of Wadi ad-Dawasir. The entire route was exactly 491 km long, with a special section being 287 km.

This distance was the fastest for the duo Marek Goczał – Łukasz Łaskawiec. The Poles reached the finish line in 3: 00.52 and thus overtook the US-Brazilian team Jones – Gugelmin by 58 seconds.

They also appeared on the lowest step of the podium “White-red” – Michał Goczał and Szymon Gospodarczyk lost two minutes and 36 seconds to the leaders. Meanwhile, the fifth place was won by Aron Domżała and Maciej Marton (+5.35).

Dakar 2022. Andrzej Borowczyk on the winning rookie: This is an incredibly versatile driver. VIDEO
Eleven Sports

In the general classification of the SSV category, after nine stages, Jones and Gugelmin take the first place (their time is 37: 14.28). The second place is taken by the Spaniards Farres Guell and Ortega Gil (+13.47), while the podium is closed by Michał Goczał and Szymon Gospodarczyk (+16.27). Marek Goczał and Łukasz Łaskawiec are just behind them, in fourth position (+32.19).

Between the ninth and tenth stages of the Rally Dakar 2022 there will be no breaks – the next edition of the competition will start on January 12. The drivers will have to cover the route Wadi ad-Dawasir – Bisha, which is 759 km long (including 375 km of a special stage).

David Martin is the lead editor for Spark Chronicles. David has been working as a freelance journalist.
Previous The Polish Financial Supervision Authority imposed a fine of over PLN 4 million on ING Bank Śląski
Next “Understand this once and for all.” Sikorski responds to Lavrov