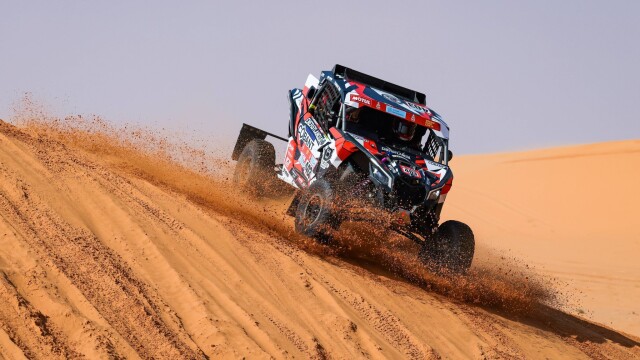 Dakar Rally 2022. Michał Goczał and Szymon Gospodarczyk became the winners of the 4th stage: the results of the Poles

The best time of the Wednesday stage with the finish in Riyadh was achieved by the Brazilians Rodrigo Luppi De Oliveira and Maykel Justo, ahead of the American Austin Jones and the Brazilian Gustavo Gugelmina and Goczała z Gospodarczyk.

Rivals punished, Poles in the lead

After verifying the results, it turned out that the two leading crews received a penalty of six minutes each and fell in the classification for the Poles.

Thus, all the existing ones dakarthese episodes in the UTV class fell prey to the Biało-Czerwonych.

The prologue was won by Marek Goczał and Łukasz Łaskawiec, who were also the best on Tuesday. On Sunday, Domżała and Maciej Marton were the fastest, and Michał Goczał achieved his first victory on Monday.

Wednesday was unlucky for the crew of Domżała, Marton. First, the competitors had to switch places due to problems with Domżała’s tearing eye, and then their car hit the rival’s car standing in an unmarked place. The Poles seriously damaged the car and had to wait for a service truck. They made it to the finish line, but with a loss of several hours.

– There was a lot of luck in all this, anyway. After jumping from the dune, we literally flew over this competitor and hit his car ahead. Well idiot, in such situations you even put a helmet on the top of the dune to warn others. Fortunately, Maciek only left a tire mark on the helmet, but the whole front was broken – said Domżała after reaching the campsite.

The Can-Ama factory team driver has another worry too. For two days now, he has had problems with a watery eye, which makes driving very difficult.

– Today we had to switch on the episode, because I could hardly see anything with the eye. I’ve been to the medical center twice before, but they just thought it over and said there was nothing else they could do. It is impossible to drive with one eye because you have a completely different assessment of the situation. Even when we were driving slowly, I didn’t notice any hole. Theoretically, Maciek can lead, but I do not know if such a change makes sense, because he is the best at navigating, and I cope worse with it – added Domżała.

Domżała and Marton take off in Dakarfor the fourth time. Each of their performances so far is a story of ups and downs. Already in 2019, they surprised everyone in South America, placing them in the top ten of the car categories after four stages. Then they made a navigational mistake and drove into a narrow canyon ended with a rock ledge, from which a helicopter retrieved their Toyota after a few days. They later switched to the UTV light vehicle, won stages, but were also haunted by breakdowns. A year ago, they achieved great success, taking third place.

They stay in Riyadh

Dakar Rally participants will spend the next three days in Riyadh. On Thursday and Friday they will have stages around this city, and Saturday will be a day off. On Sunday, they will set off on the seventh stage route to Al Dawadimi.

Reports from the Dakar Rally every day at 21:00 in Eurosport 1 and player.pl

David Martin is the lead editor for Spark Chronicles. David has been working as a freelance journalist.
Previous North Korea will leave the Beijing Olympics. Pyongyang gave the reasons
Next Pole Dariusz W. murdered. First homicide victim in 2022 in England