Direct war in Ukraine, Zelensky: «Here are the weapons we need, 1000 cannons and drones». Usa: “Now the outcome of the conflict is decided.” Moscow to Azot’s fighters: lay down your arms

War in Ukraine, live news today June 15, 112th day since Putin’s invasion by Russia.
Moscow announced today the opening of a humanitarian corridor for civilian refugees inside the Azot chemical plant in Severodonetsk. Russia has called on the fighters at the facility to release the civilians and lay down their weapons. For Kiev: “There are at least 550 people.” Today, June 15, the defense ministers of 47 countries around the world will meet and try to develop the strategy for a ceasefire and peace.

Why is the price of gas rising? Gazprom cuts 40% of supplies to Europe: the pretext of the turbine
.

7.45 am – Volodymyr Zelensky reiterates to Western partners that Ukraine needs modern weapons to stop Russian missiles that the devices currently in possession of the Ukrainian armed forces are unable to shoot down. «Ukraine needs modern anti-missile weapons. Our country still does not have enough (…) the delay in their supply cannot be justified. I will constantly emphasize this when speaking with our partners, ”Zelensky said in a message addressed to the Ukrainian population. To this end, he announced important talks this week “not only with European politicians”. “Russia still has several types of Soviet missiles, which are even more dangerous. They are much less accurate and therefore much more threatening for civilian targets and normal residential buildings, ”explained the Ukrainian president. Zelensky then reported that he had asked the commander-in-chief of the Ukrainian Armed Forces, Valeriy Zaluzhny, to check the news in some media that there are Ukrainian defense soldiers without sufficient personal protective equipment. “The reports I receive are significantly different. I now expect logistical inspections in the military: inspections of what is supplied and how personal protective equipment is distributed. Today, everyone in the combat zones must have everything they need to protect themselves, ”added Zelensky. 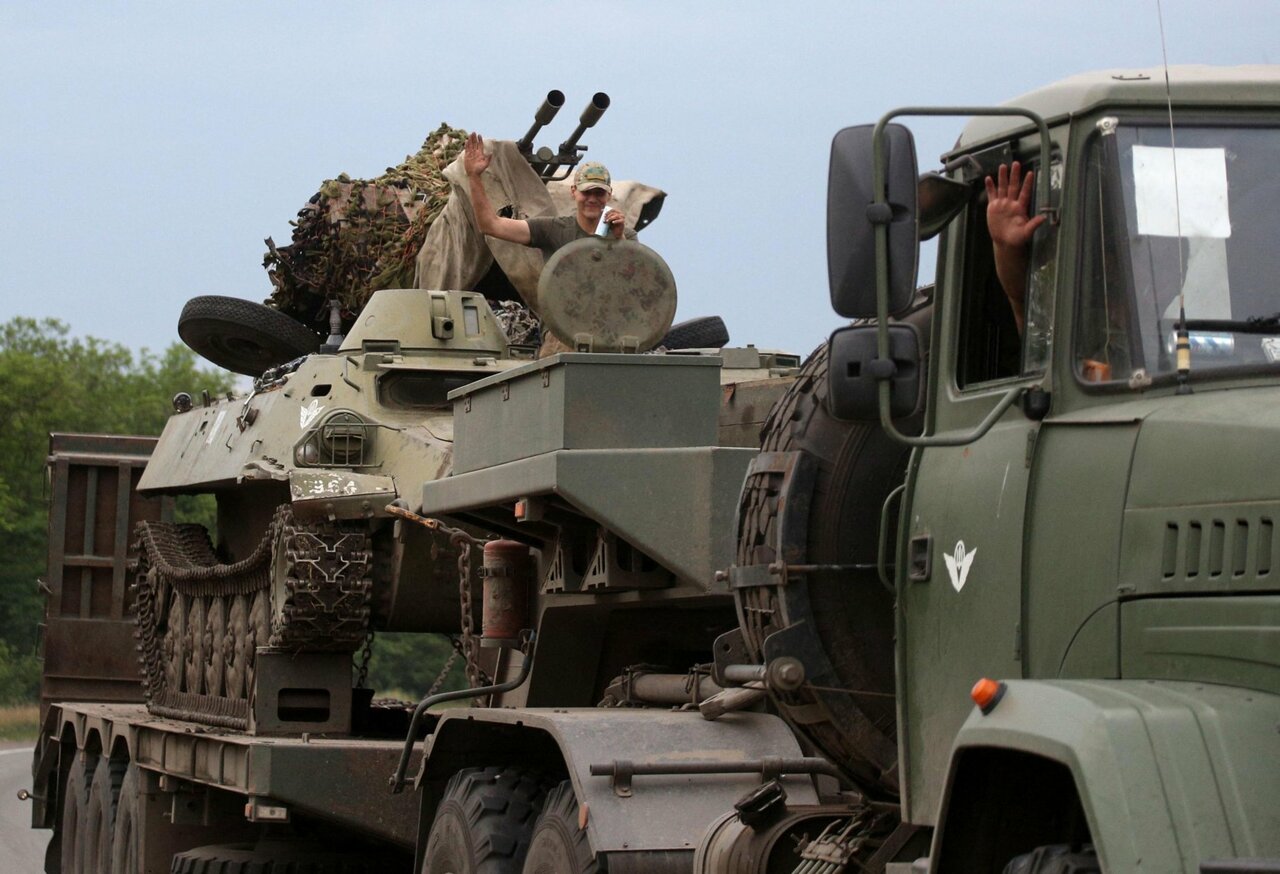 7.42 am – The mainland Crimea-Donbass road via Mariupol, Melitopol and Kherson is open to civilians: a senior official from the Zaporizhzhia region told the Russian agency Tass. “The route is not only for the military,” said Vladimir Rogov, a member of the executive board of the civil-military administration of the Zaporizhia region, “I have already traveled from Kherson to Melitopol via Berdyansk, Mariupol and Novoazovsk. From Novoazovsk I went to Russia. I drove a normal civilian vehicle, not a military one. People use this route, many do, and there are also queues at the border because it was not designed for such heavy traffic. But this path exists “. And he added that he is impatient for traffic to resume via the standard Moscow-Crimea route via Zaporizhzhia, used in imperial Russia and the Soviet Union. The route was closed by Ukraine after the reunification of Crimea with Russia in 2014.

7.32 am – Russia has ordered to surrender to the Ukrainian forces barricaded in the Azot chemical plant in the eastern city of Severodonetsk within the early hours of today. The Guardian reports it. General Mikhail Mizintsev, the officer who was in charge of the siege of Mariupol, said the fighters should “stop their senseless resistance and lay down their weapons” starting at 8 am Moscow time (7 am Italian time). Yesterday Mayor Oleksandr Stryuk said that there are also 560 civilians inside the factory.

6.22 am – “During the last day there have been no drastic changes in the battle for Donbass. The fiercest fighting is in Sievierdonetsk and in all neighboring cities and communities, as before. The losses, unfortunately, are painful. But we have to resist. It is about our state. It is essential to resist there, in the Donbass ». This was declared by the Ukrainian president, Volodymyr Zelensky, providing updates on the situation on the ground. “The more casualties the enemy takes there, the less power he will have to continue the aggression. Therefore, the Donbass is the key to determining who will win in the coming weeks. We also have painful losses in the Kharkiv region, where the Russian army is trying to strengthen its positions. The battles in that area continue and we will still have to fight hard to ensure the complete security of Kharkiv and the region, ”said Zelensky. The Guardian reports.

04:45 – Here is the list of weapons that Ukraine needs: a thousand guns and drones

The Contact Group for Ukraine, made up of defense ministers from 47 countries, is meeting today, Wednesday 15 June, in Brussels. At the same time, the summit of the defense ministers of the 30 nations that adhere to NATO is held. Yesterday, Tuesday 14, Volodymyr Zelensky’s closest advisers indicated on Twitter what the needs of the Ukrainian resistance are. The Ministry of Defense has made it known that «60 long rocket launchers Mlrs (Multiple launch rocket system, US-made) are needed to block the advance of the Russians in the Donbass; with 40 they will continue to advance ». At the moment, the Ukrainians still point out, the United States and the United Kingdom have promised “a handful”. Mykhaylo PodoliakZelensky’s advisor, has even published on Twitter “the list of ingredients to win the war”.
Here they are: 1000 Hovitzers guns, 155 mm caliber; 300 Mlrs; 500 tanks; 2000 armored vehicles; 1000 drones. And he concluded: «Today the Contact Group is meeting; expect a reply”. But it is very likely that Podoliak’s expectations will be disappointed. His list is too ambitious. However, it is true that today’s double appointment will have to give some concrete indications. Ukrainians are losing ground in the Donbass and, above all, would also be short of ammunition. The first move will once again touch the American Defense Minister, Lloyd Austin, the creator of the «Contact Group». In Washington, doubts are also beginning to spread within the administration, regularly intercepted by the “New York Times”. How long will Zelensky be able to withstand the brunt of the Russians? Officially, however, the line does not change. Joe Biden has repeated it in recent days. Defense Undersecretary Colin H. Kahl spoke yesterday for the government: «We will not be the ones to tell the Ukrainians how to negotiate, when to negotiate and what to negotiate. They will decide it ». The logical consequence, then, is that the US and the West in general must provide Zelensky with the necessary weapons if not to “win the war”, as Podoliak would like, at least not to be overwhelmed.

The US will build temporary silos on the border with Ukraine to facilitate the export of Ukrainian wheat to the world, now blocked by the conflict with Russia. This was announced by Joe Biden speaking in Philadelphia: «We will build silos, temporary silos on the borders of Ukraine, including Poland. So we can move (the grain) from those cars into silos and into European ones to take it across the ocean around the world. But it takes time, ”he stressed.

The war in Ukraine has reached a crucial stage that could determine the long-term outcome of the conflict. This is what multiple sources close to US and Western intelligence have reported, according to CNN, which also underlines how this crucial moment could force Western governments to make a difficult decision, which so far have offered support to Ukraine at an ever-costing cost. higher for their economies and national arms stocks. According to a senior US defense official, Defense Secretary Lloyd Austin would be ready to lead a working group from nearly 50 countries to discuss the crisis. “I think we are about to get to the point where one side or the other will be successful,” said a senior NATO official. “Either the Russians will reach Slovyansk and Kramatorsk or the Ukrainians will stop them here.” And if the Ukrainians are able to hold the line here, in the face of this number of forces, it will be important ».

00.52 The war in Ukraine has reached a crucial moment which could determine the long-term outcome. This was stated by some American intelligence officials, according to reports from CNN.

11:42 pm – Stoltenberg, Zelensky will speak at the NATO summit leader in Madrid

“I can’t wait to welcome President Zelensky who will address NATO leaders at our Madrid summit.” NATO Secretary General Jens Stoltenberg said this after an informal meeting on Tuesday at the Dutch prime minister’s official residence in The Hague, co-hosted by his Danish counterpart. «In response» to the Russian invasion of Ukraine, «we have strengthened our ability to protect and defend every inch of NATO’s allied territory – he added -. In Madrid we will take the next steps ».

David Martin is the lead editor for Spark Chronicles. David has been working as a freelance journalist.
Previous The Hunger Games: The Ballad of the Nightingale and the Serpent, new cast members
Next After criticism from Galvão Bueno, Neymar revolts and shoots at the global: “Se fud*eu”