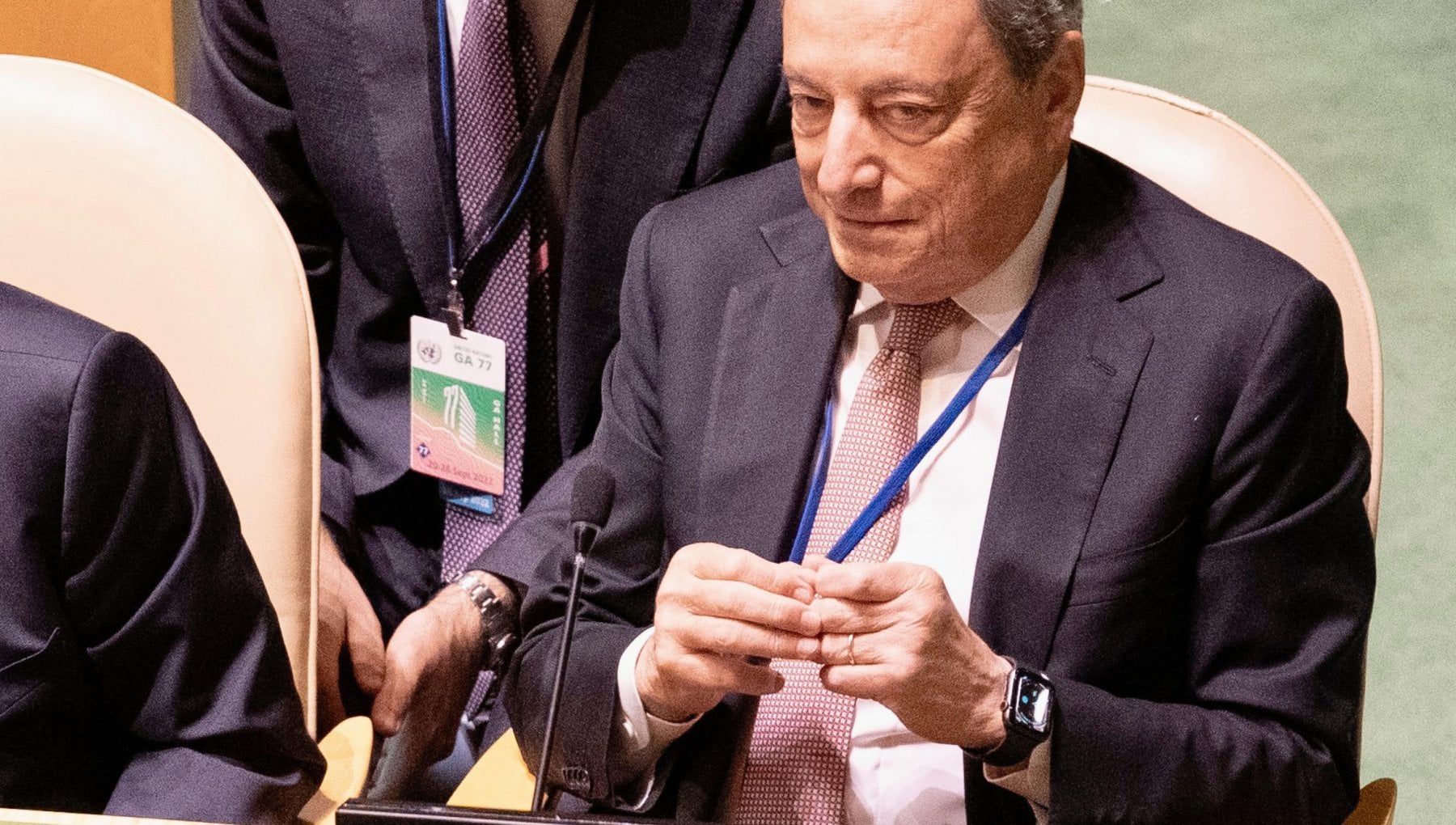 Draghi’s speech at the UN. “Moscow tramples on the rules, ahead on sanctions”

NEW YORK – A total condemnation of the Russia. Before the United Nations General Assembly. “The referendums for independence in the Donbass – he says Mario Draghi – they are a further violation of international law that we strongly condemn “. A move that aggravates an already difficult climate,” as rarely since the end of the Cold War. And on the other hand, “the responsibilities of the conflict are clear and of one party alone “, while Kiev must also be helped to defend itself militarily. However, we must strive to find a solution, underlines the premier:” Italy – he promises – is at the forefront to try to reach an agreement, when it is possible “. the terrain of “multilateralism.” Working on an agreement to demilitarize the Zaporizhzhia area in order to avoid nuclear catastrophe, but always on one condition: the Ukrainians decide peace.

In New York, the too sultry weather for mid-September mixes with tension fueled by Putin. The speech of the chief executive is affected, direct and harsh towards Moscow. It is not only for the reiterated need to oppose autocracies.

Draghi considers it a priority to support sanctions against Russia, which will make it more difficult “to react to defeats”. Europe and the United States, however, must “do more” to amortize the costs of energy “blackmail”, through a ceiling on the price of gas. In short, the line chosen by the premier is that of the United States.

Kiev: “With farce referendums, no more negotiations with Moscow”. And it asks for long-range missiles

by our correspondent Daniele Raineri

Outside the UN Headquarters, however, the sense of mission is affected by the concerns fueled by a possible victory in the elections of the sovereignists, which are agitating Western partners. It is one of the keys with which to read the attempt to arrange a meeting with Joe Biden. The two delegations will try to find a link between agendas. That of the Prime Minister has been working on it for some time and he really hopes for it. The American one has made it known that at the moment there are no official bilaterals on the agenda, but that a face-to-face can always be organized, even in the most informal way of “pull aside”.

by our correspondent Rosalba Castelletti

On the other hand, the US President will remain in New York until Thursday morning. And, not surprisingly, the Italian has drawn a gigantic question mark next to the item “return to Rome”. For the former banker, being received by Biden is both fundamental and symbolic at the same time. But even for the White House it is not a detail, given that the escalation of Moscow makes NATO’s Mediterranean flank obligatory.

The pressure of the Americans on the Italian balance, on the other hand, is evident. Washington would like Draghi to remain in the saddle even after the vote, like Brussels. It is possible that somehow this scenario – all theoretical, given that in a few days there is a vote and the latest public polls speak of a dominant right – occupy part of the interview. What is certain is that over the border the sovereignty of Meloni and Salvini is now worrying. If this right wins, will it reopen a channel of dialogue with Putin? Will it break the sanctions front? Will it paralyze Europe by clashing with Paris and Berlin, as the leader of the Brothers of Italy promises? For this reason, Westerners are hoping for Draghi, perhaps underestimating the electoral passage.

Russian referendums in Ukraine, the condemnation of the United States: “It’s a farce, a sign of Putin’s weakness”

by our correspondent Paolo Mastrolilli

The premier shows he is shirking, so much so that yesterday he also joked about the future with the high school students of Canova, traveling to Manhattan to participate in the work of Youth4climate (which will become an annual event also managed by Italy): “Now I’ll have free time … “. But the truth is that he too plays a game for the future. And that he would not escape – perhaps even could not – from a possible new call, if the conditions were created. Of course, this was the message on Monday evening at the Annual Awards Dinner’s “statesman of the year” award. First a letter from Biden congratulating the former banker, then the praise of Henry Kissinger, and finally the CEO of Blackrock who praises the stability and links it to the tenure of the premier in office.

Videogames entered his life in the late '80s, at the time of the first meeting with Super Mario Bros, and even today they make it a permanent part, after almost 30 years. Pros and defects: he manages to finish Super Mario Bros in less than 5 minutes but he has never finished Final Fight with a credit ... he's still trying.
Previous Cycling, World Time Trial: Ganna challenges Van der Poel. And there are also Tahiti and Samoa
Next Nvidia presented its new technology – Nerd4.life