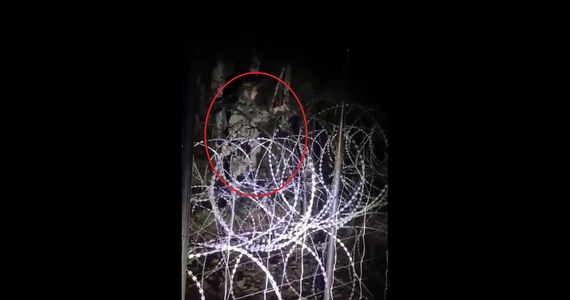 “Drunken Belarusians under arms at the border”. The Ministry of National Defense publishes a video

“Drunken Belarusians are on duty at the border under arms. This is not the first case that our soldiers have encountered” – reads the full text of the tweet of the Ministry of National Defense.

The video is over a minute long. It shows how a wobbly Belarusian soldier tries to talk to Polish officers. He says, among others in English and Belarusian. He wants to exchange cigarettes, but hears in response that Polish soldiers do not smoke.

Drunken Belarusians are on duty at the border under arms. This is not the first such case that our soldiers have encountered. pic.twitter.com/LwNdYVh74c
– Ministry of National Defense (@MON_GOV_PL)
November 21, 2021

A few hours earlier, the Ministry of National Defense posted another video from the Polish-Belarusian border on Twitter. It shows a boy talking to uniformed people. “Another evidence of the instrumental exploitation of migrants by Belarusian services. The child asks the officers for permission to attack our soldiers with stones “- we read in the entry by the Ministry of National Defense.

A short film was attached to the entry. You can see a little boy walking up to uniformed people, talking to them, and then walking away.

Another proof of the instrumental use of migrants by the Belarusian services. The child asks the officers for permission to attack our soldiers with stones. pic.twitter.com/mdMdp0vooA
– Ministry of National Defense (@MON_GOV_PL)
November 21, 2021

In turn, the head of the Ministry of National Defense Mariusz Błaszczak in the post posted on Twitter, he assessed that “the fact that Lukashenka’s hybrid attack does not go beyond the Polish-Belarusian border is due to the professionalism of soldiers and officials and the consistent policy of the government.”

The fact that Lukashenka’s hybrid attack does not go beyond the Polish-Belarusian border is due to the professionalism of soldiers and officers and the consistent policy of the government. We defend Poland and Europe. We will not change our approach. https://t.co/cApzzKZgnt
– Mariusz Błaszczak (@mblaszczak)
November 21, 2021

“We defend Poland and Europe. We will not change our approach” – he added.

Since the beginning of the year border guards has recorded over 35 thousand. attempts to illegally cross the Polish-Belarusian border, of which over 6,000 in November, nearly 17.3 thousand. in October, almost 7.7 thous. in September and over 3.5 thousand. in August.

From September 2, due to the migratory pressure in the border zone with Belarus in 183 localities in the voivodeship Podlasie and Lublin voivodeships apply state of emergency. It was introduced for 30 days under the ordinance of President Andrzej Duda, issued at the request of the Council of Ministers. The Seym agreed to extend the state of emergency for another 60 days.

Miller in “Guest of the Events” about the situation on the border with Belarus: Poland is a country without diplomacy
Polsat News

Videogames entered his life in the late '80s, at the time of the first meeting with Super Mario Bros, and even today they make it a permanent part, after almost 30 years. Pros and defects: he manages to finish Super Mario Bros in less than 5 minutes but he has never finished Final Fight with a credit ... he's still trying.
Previous Haiti: Two of the seventeen abducted Christian missionaries are released
Next Space tourism. What is the future of the futuristic industry?