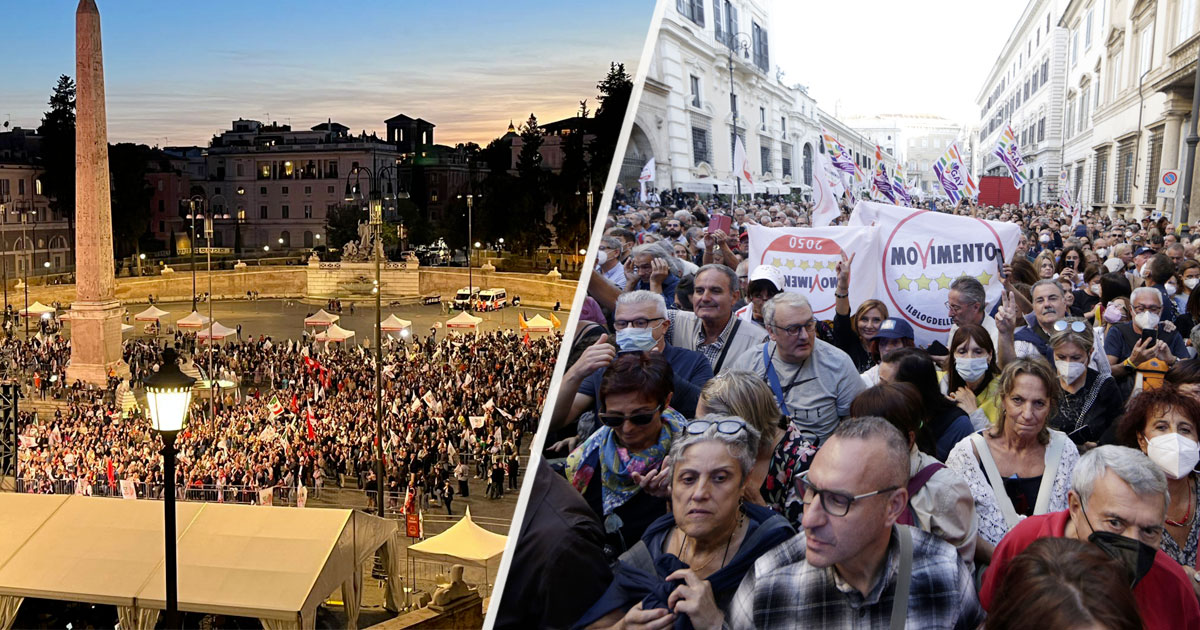 Conte: “Indifferent must go to vote”

“Sunday is an important day, we must address the indifferent, those who no longer believe in good politics. They have to come and vote to decide the fate of this country ”. Like this Giuseppe Contefrom the M5S stage in Piazza Santi Apostoli.

Fico: “The Movement is alive”

“A rumor had come, ‘the Movement is dead”, but “the Movement is alive, for the umpteenth time. The Movement has a soul that always manages to renew itself ”, says the Speaker of the Chamber Roberto Ficofrom the M5S stage in Piazza Santi Apostoli

Conte: “Peace or air conditioners? Both disappeared from the radar “

“This war, with which way out are we facing it? Do we want a negotiation or not? The government of the best asked us: do you want peace or the air conditioners turned on? Peace came out of the radar, we had to turn off the air conditioners ”. Like this Giuseppe Contefrom the M5S stage in Piazza Santi Apostoli.

Letta: “Made fun of electric bus, better than private jet”

“We were made fun of on the electric bus. But it is better to travel by electric bus rather than taking a private jet ”. She said it Enrico Letta at the demonstration of the Democratic Party in Piazza del Popolo.

Conte: “They gave us up for dead and once again they made a mistake”

Giuseppe Conte arrives on the stage of Piazza Santi Apostoli, welcomed by the ovation of the pentastellato people. “What is happening? They had given us up for deadbut this square seems to me a symptom of good health, once again they were wrong ”, says the president of the M5S.

“We are the hope when we fight injustices, when we don’t build walls”. “Long live the EU, democratic and progressive Italy. Long live the Democratic Party. Let’s go and win on Sunday ”. The secretary of the Democratic Party said so Enrico Letta in Piazza del Popolo. “The comeback of these days is the result of the fact that in our party” there is “the best political class in the territories”, he added.

Read: “We will not allow the Constitution to be overturned”

“We have made the choice to defend the Italian Constitution, born from the Resistance and anti-fascism, we will not allow that Constitution, the most beautiful in the world, to be overturned by the right”. The secretary of the Democratic Party said it, Enrico Lettaat the rally in Piazza del Popolo in Rome with which the election campaign of the list is closed Democratic PD-Italy and progressive.

Read: “In the next legislature Zan will become law”

“We made the choice on rights, knowing that on the other side we have a retrograde Italy that does not think it is possible to give people freedom to live their rights. The choices they made and the words they use are intolerable. We must move forward on these issues. Starting from the law on citizenship “. The secretary of the Democratic Party said it, Enrico Lettaat the meeting in Piazza del Popolo in Rome with which the electoral campaign of the democratic and progressive Pd-Italia list is closed. “I say to Zan that in the next legislature his proposal will become law ”.

Letta: “Me in Berlin they in Budapest”

“I have been criticized because I went to Berlinof course they just go to Budapest…. I went to Berlin to speak with the German Chancellor to convince him that the EU must find a solution to energy costs next Thursday and the EU will find it ”. The leader of the Democratic Party said so Enrico Letta at Piazza del Popolo.

Letta: “We Italy of the future, against divisions”

“In these last hours I ask you to make a final reflection, on what this election campaign represented, we have not only said our ideas but also sowed a lot thinking about a positive Italy, of the future. The real difference is that we campaigned talking about the Italy of the future, them about the Italy of the past, about divisions ”. The secretary of the Pd, Enrico Lettaat the rally in Piazza del Popolo in Rome with which the electoral campaign of the democratic and progressive Pd-Italy list is closed.

Videogames entered his life in the late '80s, at the time of the first meeting with Super Mario Bros, and even today they make it a permanent part, after almost 30 years. Pros and defects: he manages to finish Super Mario Bros in less than 5 minutes but he has never finished Final Fight with a credit ... he's still trying.
Previous Juve, waiting for the outcome of the Board of Directors: cost cutting on the agenda, who is going to say goodbye. And the future of Allegri … | First page
Next New life for Guendalina Tavassi, Paolo Pazzaglia who organizes his own funeral, great concern for Cara Delevingne and… all gossip with Roberto Alessi!

“I continue to read unreal reconstructions regarding possible ministers of a center-right government. After unsuccessful …