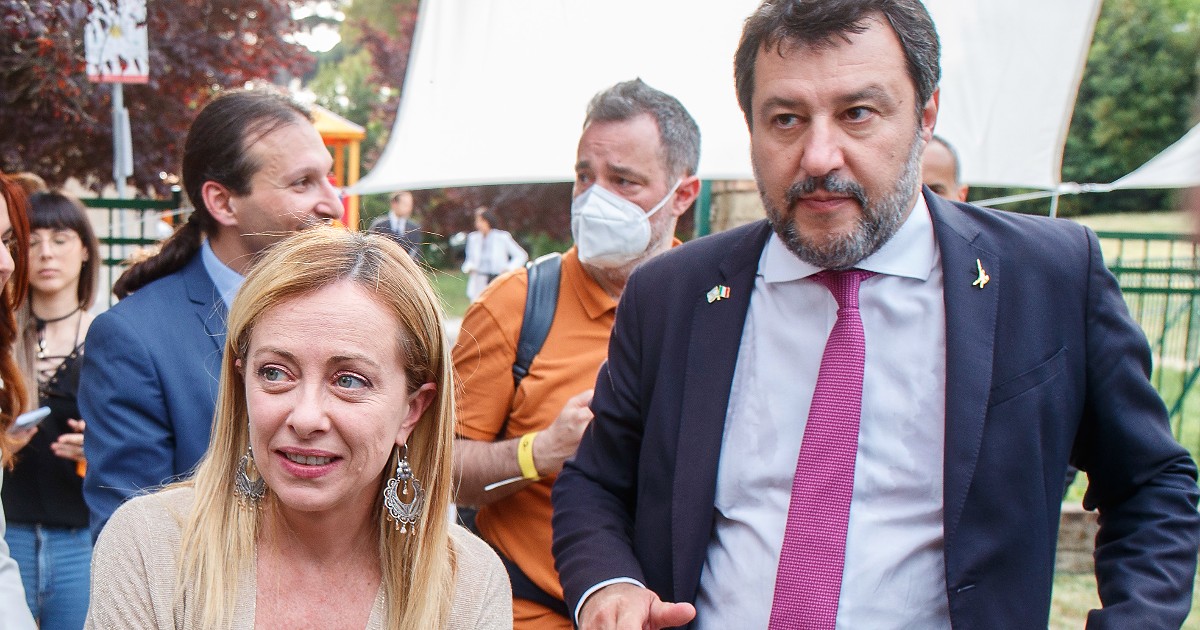 Elections, the direct – Meloni and Salvini still divided on the budget gap. The League announces “record event for one million people”

Zingaretti: “Calenda destructive man, he only speaks ill of others”

“Calenda is a destructive man. She picks up and speaks only badly of others. Instead it is time to build and give certainties ”. Nicola Zingaretti said this on the sidelines of an electoral initiative to those who ask him about the video of Calenda against the municipal administration of Rome led by Roberto Gualtieri.

“The strategic choice on energy requires that there are regasifiers, which work. Obviously they must be managed and applied in agreement and agreement with the local administrations, which is what is being done both in Emilia Romagna and in Tuscany. A discussion is underway, which is obviously a complicated discussion in Piombino (Livorno) more than in Ravenna, because in Piombino there is a past history, a history linked to the theme of the steel industry. As the President of the Region rightly said, we need to do a good job linked above all to the legacies of the past, to the steel industry of the past. This is why we need a discussion, a confrontation with the territorial realities that go ahead. But I am confident that this comparison can bring positive results ”. This was said by the secretary of the Democratic Party Enrico Letta on the sidelines of an electoral initiative in Pietrasanta (Lucca).

Read: “Nuclear is not a solution”

“The last nuclear power plant was inaugurated this year, in Finland. It took seven years to make it and it cost 11 billion. Anyone who thinks nuclear power is the solution today says something that is good for conferences, but not for reality ”. Thus the secretary of the Democratic Party Enrico Letta on the sidelines of an electoral meeting in Piazza Duomo in Pietrasanta, in Versilia, province of Lucca. “The reality – added Letta – is an independence that we must find with new sources of gas supply, and with a strong acceleration on plants for renewables. Then we need to make an energy saving plan that must be put into practice very well “.

Salvini launches collection of signatures to abolish the RAI fee

“I leave attacks and insults to Letta and the Democratic Party, I always and only serve the interests of the Italians: whoever chooses the League chooses (also) to stop the Rai license fee. Leftist rallies on public TV must not be paid for by taxpayers ”. Matteo Salvini writes it on Facebook, launching the online signature collection “to support the abolition of the fee”. Let us make our voices heard ”, asks the leader of the League, who launched the proposal last Sunday in Pontida.

Everyone is talking about your comeback, what is the result you expect and would you consider satisfactory? “We have not set ourselves a target in terms of percentages, but walking around the Italian squares we feel a growing enthusiasm that belies the forecasts of those who only ten days ago gave the Movement for dead”. She says so in an interview withAdnkronos the leader of the M5S Giuseppe Conte. “We are pursuing a transparent social agenda: defense of legality, super bonuses, protection of the weakest, ecological transition and respect for the environment, a stop to starvation wages and the savage precariousness of work. And on these and other battles we ask citizens for support ”, he remarked.

“30 thousand kilometers up and down Italy, touching all regions, from August 15th to today: these are the (provisional) numbers of Matteo Salvini’s electoral campaign”, according to what the Lega has announced. Il Carroccio announces also for Friday – without anticipating details – the organization of “a record initiative with the aim of involving at least one million people”.

Renzi: “Who is afraid of the Mes?”

“Now we can go back to discussing serious things. For example: why only do we want the 37 billion euros for health? Who is the MES afraid of? ”. The leader of IV, Matteo Renzi, writes on his e-news.

“The idea of ​​giving in to Putin’s blackmail is out of this world, I hope that the vote on September 25 is also a vote on this, that is, that Italians do not vote for Putin’s friends” according to the secretary of the Democratic Party, Enrico Letta, ” Putin participates in the vote on September 25 and will be the first to look at the result, and to try to understand if it will be positive or negative for him – he adds -. If the right wing wins, Putin will be the first to celebrate. Either we are here or there, or with Putin or with Europe. The Italian right is deeply ambiguous on this issue and this is a very negative fact for our country because Europe will not be ambiguous ”.

Read: “Wedge abatement is the only serious proposal”

The reduction of the tax wedge “is our priority and our only proposal for a tax reduction. On the other hand, there are twenty different ones and they have no coverage, so they are not credible ”. This was said by the secretary of the Democratic Party Enrico Letta, presenting the economic proposals of the party in Milan, together with the head of economics dem Antonio Misiani, the deputy secretary Irene Tinagli, the economist Carlo Cottarelli and the secretary of the Milan Democratic Party Silvia Roggiani. The proposal to reduce the tax wedge – underlined Letta – is a “strong message for both workers, to be able to make them have a sort of 14th at the end of the year, which is the only way to fight expensive living and inflation which has become unsustainable ”, but it is a“ positive message also for businesses ”.

Sunday’s vote is “a referendum on citizenship income. Civic commitment defends it, the right abolishes it ”. The Foreign Minister and IC leader Luigi Di Maio says so. “The elections have turned into a referendum on citizenship income. At this time when bread costs 20 percent more, bills 300 percent more, abolishing income is basically madness. We can improve everything we want but abolishing it is madness ”.

Videogames entered his life in the late '80s, at the time of the first meeting with Super Mario Bros, and even today they make it a permanent part, after almost 30 years. Pros and defects: he manages to finish Super Mario Bros in less than 5 minutes but he has never finished Final Fight with a credit ... he's still trying.
Previous Venghino, gentlemen come to the Sampdoria media circus – Primocanale.it
Next She-Hulk interpreter Jameela Jamil explains how Titania would react to the Thunderbolts roster