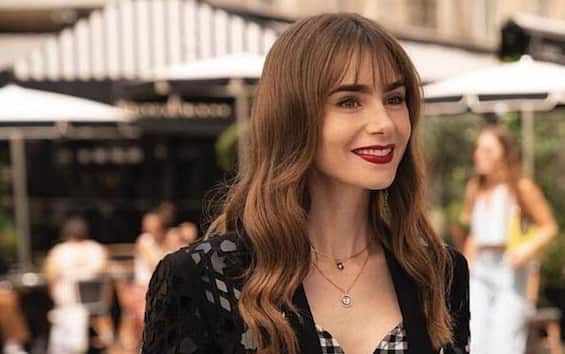 Emily in Paris, the posters of the third season

There are only a few weeks left for the debut of the third season of Emily In Paris on Netflix, scheduled for December 21 (it will also be visible on Sky Q and via the app on the Now Smart Stick). The series follows the bubbly Emily Cooper (played by Lily Collins) as she moves from Chicago to Paris in search of her dream job in marketing. Let’s find out new images released from Netflix and previews of season number three.

Emily In Paris 3, the trailer of the series with Lily Collins

Netflix has decided to give audiences a taste of what’s to come in season 3 with some posters, the first of which emphasizes Emily with a sophisticated monochrome check blazer, fringed sleeves and matching skirt. Her dress is perfectly matched with black pumps and a messy and effortless hairstyle, which shows off her new fringe. For fans of the show, this new look is especially noteworthy because the quirky outfits from the first two seasons of Emily in Paris have been a topic of great discussion. A more sober outfit seems to suggest that Emily has finally found her place in the French capital and is no longer playing the role of American tourist.

Another poster shows us Emily’s new British boyfriend, Alfie (Lucien Laviscount). In the poster, the banker is wearing a three-piece pinstripe suit. Meanwhile, Emily’s former flame, lo Chef Gabriel, poses in another shot with a more casual style: brown shirt, gray shirt and jeans. The fact that the two men look very different from an aesthetic point of view also seems to symbolize their different relationships with Emily. There protagonist’s messy love life was a central point of the series, both for the difficulties experienced with Gabriel, and for the rapid transition from enemies to lovers with Alfie. Season 3 is set to add a splash of further confusion to the mix, with Emily and Alfie trying to make things work, even if “our” can’t get Gabriel out of her head.

David Martin is the lead editor for Spark Chronicles. David has been working as a freelance journalist.
Previous Sinner at court with Dakota Fanning: when tennis unites
Next Qatar 2022, France won’t give up after appeal rejected by Fifa: “We want to understand”