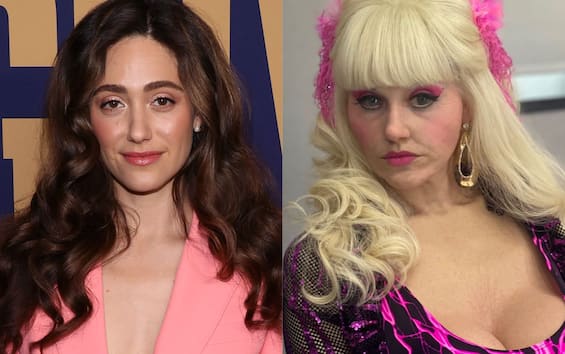 A truly complex and impressive transformation that he has brought about Emmy Rossum to become Angelyne. The actress herself revealed, in a recent interview with The Hollywood Reporter, that she had “blisters from fake breasts” and that she suffered tear duct problems from wearing two pairs of contact lenses. “The physicality of the character was challenging. The body is heavybut it has to feel light and bubbly,” admitted the 35-year-old actress, who became famous thanks to the 2004 film The Phantom of the Opera. Rossum’s husband, Sam Esmail, executive producer of the show, confessed that he had a hard time recognizing his wife under the make-up and the mask. “She was lost in this person. I’m serious. I’m talking about my wife. It’s a little creepy” he confessed.

Emmy Rossum, the star of Shameless has become a mother

The miniseries angelyne is dedicated to an explosive blonde who covered the walls of Los Angeles with her image on posters in the 80s. She did it for no particular reason, just to establish herself as a celebrity even though she wasn’t. The story is based on a 2017 Hollywood Reporter article, which claimed the woman’s real name was Ronia Tamar Goldberg, born in Poland in 1950 to Holocaust survivors. However, the blonde pin-up has always denied, stating categorically: “I was born Angelyne”. The episodes retrace like this Ronia’s true story, which became famous thanks to her intuition, years before social networks. She understood that to become popular she had to believe she already was. Effectively, paper the city with his photos attracted media attention, soon making the woman in demand for films, series and television programs. Emmy Rossum described Angelyne as “a pioneer, a trickster, a visionary, the original influencer, a work of art that breathes. It’s like Marilyn Monroe going into an oven with a punk 80s Barbie doll and a dose of new age spirituality”. In the trailer we hear Angelyne say, “I don’t want to be famous for something I do, I want to be famous for who I am.” “It is not a direct biography It’s a story inspired by everything Angelyne stands for, so a magical story, a story full of hope, a story about becoming the person you’re meant to be and believing in strength. interior to make your dreams come true. It’s a story about Los Angeles and everything the city means to the people who move here and those who dream of it”. In addition to Emmy Rossum in the cast we also find Martin Freeman, Hamish Linklater, Michael Angarano, Molly Ephraim, Philip Ettinger, Lukas Gage, Charlie Rowe, Alex Karpovsky, David Krumholtz, Antjuan Tobias and Tonatiuh.