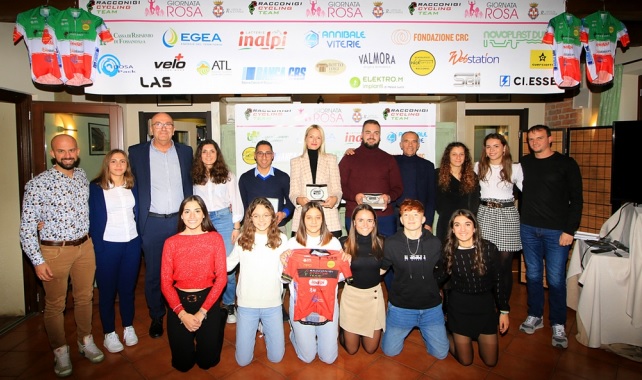 end-of-year party for the Racconigi Cycling Team…but 2023 is already knocking at the door – Targatocn.it

Traditional end-of-season party held yesterday, Sunday 20 November, from Racconigi Cycling Teamwho wanted to gather athletes, staff, authorities, sponsors and friends at the restaurant “L’Arancera”, within the enchanting eighteenth-century setting of the “Tenuta Berroni” of Racconigi, in the province of Cuneo.

Authoritative guests attended the beautiful day wanted by the Cuneo team chaired by Silvio Traversa, among them: the mayor of Racconigi Valerio Oderda, the regional councilor Paolo Bongioanni, the mayor of Cavallerleone Giovanni Bongiovanni, the great cycling enthusiast, as well as promoter of prestigious sporting events in Piedmont, Elvio Chiatellino, the former senator and mayor of Priocca Marco Perosino, the representative of UCAB Biella Filippo Borrione, the organizer of the “Giro delle Valli Cuneensi Dilettanti” Guido Campana, Dario Rinaudo, and the president of the ‘ASD Alba Bra Langhe Roero Gianni Genta. A warm greeting was brought by the coach of the national blue road cycling team Paolo Sangalli, as well as by the former Rossoneri team bearers Francesca Selva, Matilde Vitillo and Valentina Basilico, who were absent because they were involved in a training meeting with the Italian national cycling team on track.

The occasion was propitious to recall the excellent results achieved in the just concluded agonistic season. To underline the conquest of four Italian champions’ jerseys on track, to which must be added two silver medals and one bronze, one participation in the “European Track Championships” and another in the “World Track Championships”. As far as the road is concerned, the participation in 31 national and international junior and open events, with 192 actual presences, including two stage races: the “Giro della Campania in Rosa Open” and the “Giro delle Marche in Rosa Open ”. Two podiums conquered, a fourth, two fifths, and ten ‘top ten’, including a fifth and a ninth place at the “Italian Junior Women’s Championship” held on the ‘friendly’ roads of Cherasco, in the province of Cuneo.

Four talented athletes reconfirmed by the team manager Claudio Vassallo in view of the new competitive season: the Cremona from Castelverde Elisa Roccato, who will make her debut among the elite, the Cuneo from Bra Irene Cagnazzo, classified fifth in the “Italian Road Championship” and ready to face the second year among the juniors, Asia Rabbia from Cuneo from Savigliano, who in her first year among the juniors won two tricolor jerseys at the “Italian Track Championships”, as well as a silver medal and an important participation in the “European Championships on Track” of Anadia (Portugal), and the Piedmontese from Sala Biellese Camilla Marzanati, winner of four medals at the “Italian Championships on Track” (2 golds, one silver and one bronze), and blue jersey at the “World Championships on Track ” of Tel Aviv (Israel). Marzanati will also make her debut in the top category.

Five, however, the new entries ready to face the 2023 vintage with a lot of commitment, desire to grow and a lot of determination: the junior first year Marina Filimon, Giorgia Porro, Alessia Sgrisleri and Arianna Giordani, and the junior in the second year of the Martina category Naturals. Finally, a big round of applause and a heartfelt wish for a life full of successes and satisfactions was addressed to the nineteen year old from Correggio (RE) Matilde Beltrami, who after 12 years of competitive career decided to hang her bicycle on the fateful ‘nail’ to devote himself to study.

“What I leave with great sadness is a real family, where I learned the true values ​​of sport and above all of life – commented a moved Matilde – I wish the best to this fantastic cycling club and to the new athletes, who will undoubtedly have a great time and will give their best to give themselves many great satisfactions.”

The managers of the racconigese association also thanked and paid homage to the precious sponsors who make possible the activity of this great reality of national and international women’s cycling, including: Viterie Annibale, Novoplast Due, ATL Cuneo, represented by the vice president Rocco Pulitanò, Elektron , represented by Luca Mesce, CR Fossano, CR Savigliano, represented by Giovanni Quaglia, Municipality of Racconigi, Italservizi, Acqua Valmora, Inalpi, Fondazione CRC, Egea, Pack Service, Dosapack and Seli. Finally, among the technical partners, how can we forget: Guerciotti, supplier of the fantastic racing bicycles, Velo+, of the uniforms, Las, of the helmets, Officine Mattio, supplier of wheels and glasses, and Veloflex, of the tubulars.

The glorious formation of the team manager Claudio Vassallo will also make use of the precious technical collaboration of the new athletic trainer Paolo Lanfranco, the sports doctor Carlo Guardascione, as well as Camilla Vassallo, Antonio Vassallo, Silvano Sannazzaro and Luca Mesce.

The first athletic tests are scheduled for the month of December, while the first official retreat to ‘make a group’ and to refine preparation is scheduled for the first days of the new year. All the premises are there, therefore, to experience yet another pedaling adventure on the roads of great cycling in pink.

David Martin is the lead editor for Spark Chronicles. David has been working as a freelance journalist.
Previous Johnny Depp, the trial against Amber Heard will become a movie
Next F.E.A.R. 3 PC Game Full Version Download