Lazio beat Midtjylland 2-1 in a match on the fifth day of group F of the Europa League.

In the Conference League Fiorentina beat Basaksehir 2-1 in a match on the fifth and penultimate day of group A. With this result, the Viola have the mathematical certainty of the next round.

Lazio avenges in substance, but not in the score, the heavy 5-1 defeat suffered in the first leg against Midtjylland and moves to the top of the table in Group F of the Europa League, winning 2-1: Maurizio Sarri’s team will play all of November 3 in Rotterdam, against Feyenoord. In the meantime, while waiting for the verdict, he follows up the positive streak of results, confirming the good moment. The first half was good and hard-fought, on both sides: despite the handicap start, due to the goal conceded almost immediately, with the passing of the minutes Lazio rises again, putting the Danish team coming from Herning on the ropes. The Biancocelesti struggle not a little to take command of the operations, because Midtjylland concedes very little, is aggressive and well fielded by the Spanish coach Albert Capellas. The goal for the Scandinavians ‘lead came after 8’ and Isaksen signed it, with a right from outside after Marcos Antonio lost the ball in his own trocar. The Danish fans rejoice, Lazio flounders. And he has to struggle to recover from the cold shower that comes from Northern Europe. Midtjylland is well registered in every department and therefore the class of Juventus strikers is needed to deal with a situation that risks jeopardizing a possible qualification. It is Zaccagni and Felipe Anderson who pack Milinkovic-Savic’s equalizer, who arrives with a right-footed platter in the 36th minute. The goal weighs a ton, because it allows Sarri’s team to go to rest with nothing. Lazio could double, but in the 38th minute Sviatchenko almost saves on the line with the goalkeeper beaten. The time ends with a conclusion from Milinkovic-Savic that severely commits Lossl. The second half does not start under the best auspices for Lazio, which risks another collapse in the 3 ‘: cross by Paulinho and gored by Dreyer who crashes on the crossbar. Lazio takes little to equalize the wood count with a tiraccio of Zaccagni who could have had better luck. Sarri decides that the time has come for Vecino, Cataldi and Pedro: the choice was never more appropriate, since the former Barcelona – after 3 ‘of presence on the field – collects a cross from the left of Zaccagni, who had crossed the area opponent, and signs the 2-1. Lazio could drop the trio on at least three other occasions: in one, to be honest, they still succeed with Pedro, but the referee cancels for offside. Network canceled in the final also to the Danes: the substance does not change 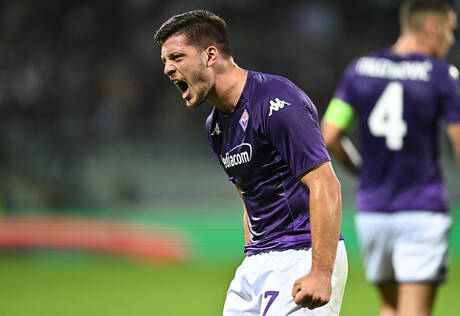 Fiorentina beat the Turks of Istanbul Basaksehir 2-1 at the Franchi and mathematically won the round of 32 of the Conference League. As for the first final place of group A, which is worth direct access to the round of 16, everything will be decided on the last day when the Viola will face the Latvians of the Rfs and the Turks the Scots of the Hearts. It is a Fiorentina that wins in comeback thanks to Jovic’s brace, but it could have done so with a much wider margin if it had managed (always with Jovic, but also Ikone, Cabral and Bonaventura in the final) to realize the many scoring actions created . A victory that bears the signature of the Serbian for the goals created but above all for the match of Kouame who made a great performance, resulting the best of him and a constant thorn in the side for the Turkish team. The Ivorian shows up immediately, on 12 ‘, when on a cross from Saponara he shoots high from a favorable position. They pass 2 ‘and Basaksehir passes: long throw from goalkeeper Sengezer, Fiorentina is still and the ball reaches Aleksic, who with a soft shot overtakes Gollini. The Italian team seems to feel the pinch but at 25 ‘comes to a draw: Dodò frees Kouame on the right out, advances and low ball in the center of the area where Jovic slips into the goal. Fiorentina begins to believe it and Kuoame at 28 ‘tries a long-range shot but finds a great intervention by Sengezer who deflects for a corner At 35’ sensational error by Jovic in front of goal: Saponara brushes the ground for the center of the area where the striker kicking high. Fiorentina restarts at the beginning of the second half with a more proactive attitude. At 10 ‘st another sensational opportunity failed by the Viola, again with Jovic: corner by Mandragora, usual side of Milenkovic and a stone’s throw from the goalkeeper Jovic fails to score. But at 16 ‘he finally made no mistake: Saponara’s soft cross, Kouame looks for the winning touch, Sengezer rejects but the attacker throws himself on the ball and heads in. At 27 ‘Italian, between a few whistles of the stadium, he substitutes Jovic for Cabral and then inserts Bonaventura and Ikone for Barak and Saponara. On the other hand, Fiorentina’s double mistake in the 34th minute was incredible: Cabral worked a ball very well and in the area from the left he gave Ikonè a penalty in motion: the ball clicked that reaches Bonaventura: feint and shot, ball on the bottom just a little. Viola still very close to the third goal with Cabral who, face to face with the goalkeeper, cannot overcome him with a soft touch. The final whistle arrives after 4 ‘of recovery, Fiorentina wins and passes but there have been many, too many, scoring opportunities that have not materialized.

David Martin is the lead editor for Spark Chronicles. David has been working as a freelance journalist.
Previous Ford at a loss of 827 million. Farewell to autonomous driving with Volkswagen, Argo AI closes
Next House explodes in Lucca, two dead and three injured – Tuscany