Exhibition and events “The Jews, Medicine and the University of Padua” from 2 November to 31 December 2022 Events in Padua

Academics and luminaries of medicine, victims of racial laws. Like Tullio Terni, director of the institute of anatomy in Padua and neurocardioanatomist, one of the fathers of modern embryology, removed from university teaching because he was a Jew and then expelled from the academic world because he was accused of fascist sympathies. He committed suicide with cyanide, an extreme act of protest against the purge. To shed light on the unpublished stories of Paduan Jewish doctors and on the relations between the Jewish Community of Padua and the University of Bo, on the occasion of the celebrations for the 800th anniversary of the Padua university, are the Foundation of the Jewish Padua Museum and the Centro for the history of the University of Padua with the exhibition “Jews, medicine and the University of Padua” which is inaugurated Wednesday 2 November, at 17.

Starting from 1500, the University of Padua, unique in Europe, admitted Jewish students, attracting young people from all over the continent and the Near East. Following the papal bull of 1564 –In Sacrosancta– to obtain the diploma it was necessary, at the Italian universities, a profession of Catholic faith on the part of the student. The Venetian Senate, on which the University of Padua depended at the time, established the possibility of conferring degrees “auctoritate veneta”, Without the presence of the bishop, keeping the university open to non-Catholic students such as Protestants, Orthodox Christians and, indeed, Jews. The University of Padua, ‘Universa universis libertas‘, was the training ground, home and forge of the best minds in Europe in medical art, from the Anglican William Harvey, discoverer of blood circulation to the illustrious Jewish clinicians Amedeo Conegliano, Donato Benvenisti and Samuel Medoro.

Richly decorated degree diplomas – starting with Harvey’s – portraits of doctors and historical photos retrace, in the Museum of Jewish Padua, the history of internationalization, tolerance and inclusion of research and medical art in the city of the Saint.

In the Renaissance era, degree diplomas were richly illustrated documents, accompanied by coats of arms and sealing wax seals, united by a graphic style with multiple references to Catholic culture and faith. In particular, each diploma was marked, on the title page, by the introductory phrase “In Christi Nomine Amen“. For Jewish students, the University agreed to a change in consonance with their religion, so the introductory phrase became “In Dei Aeterni Nomine ”.

Despite this unique example of tolerance and acceptance, the University of Padua was also involved in the dramatic events linked to fascist racial policies during the Second World War. In 1938 five full professors of Jewish “race” were expelled from the University of Padua and only one of them returned to his position after the fall of the regime.

The Paduan review, which avails itself of the patronage of the Municipality of Padua and Ucei, dedicates four in-depth meetings to these hidden pages of history. 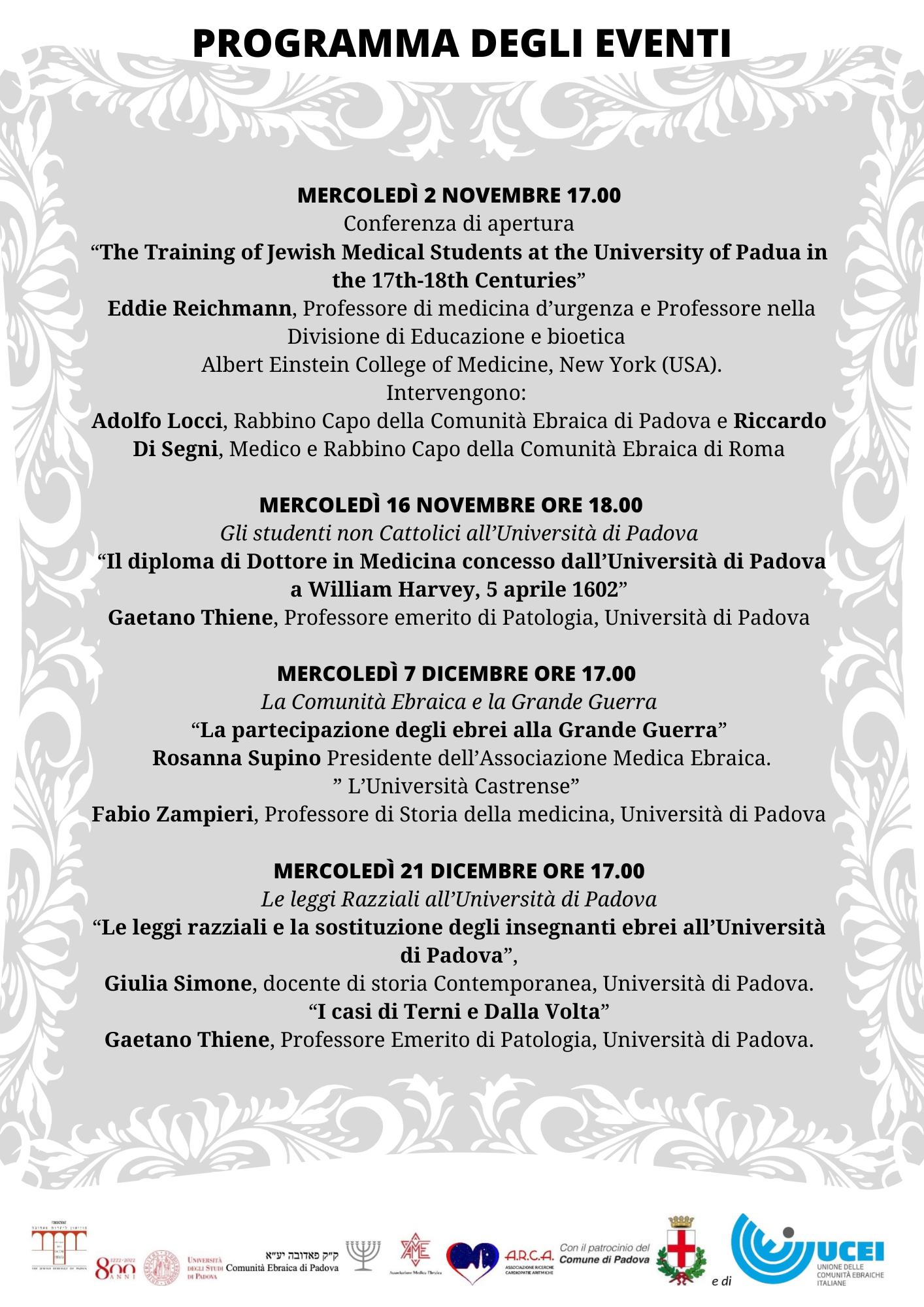 “The Training of Jewish Medical Students at the University of Padua in the 17th-18th Centuries “,, speaks Eddie Reichmann, Professor of Emergency Medicine and Professor in the Division of Education and Bioethics, Albert Einstein College of Medicine, New York (USA).
https://www.facebook.com/JewisheritagePadua Speakers: Adolfo Locci, Chief Rabbi of the Jewish Community of Padua and Riccardo Di Segni, Doctor and Chief Rabbi of the Jewish Community of Rome

WEDNESDAY 16 NOVEMBER, 6 PM Non-Catholic students at the University of Padua

WEDNESDAY 7 DECEMBER, 5 PM The Jewish Community and the Great War

“The participation of Jews in the Great War”Rosanna Supino, President of the Italian Jewish Medical Association.

“The Castrense University”, Fabio Zampieri, Professor of History of Medicine, University of Padua.

WEDNESDAY 21 DECEMBER, 5 PM Racial laws at the University of Padua

All events will be held in attendance at the Jewish Padua Museum, via delle Piazze 26 and will also be available in streaming, on the Zoom platform.

The exhibition can be visited every Sunday (9 am-6pm) and on weekdays by reservation. Reservations are required to participate in the events to museo@padovaebraica.it or by calling 049661267 (9 am-4pm, Monday to Thursday).

Videogames entered his life in the late '80s, at the time of the first meeting with Super Mario Bros, and even today they make it a permanent part, after almost 30 years. Pros and defects: he manages to finish Super Mario Bros in less than 5 minutes but he has never finished Final Fight with a credit ... he's still trying.
Previous Do you want Jennifer Aniston’s glowing skin at 53? Start using hydrolyzed collagen | Vanity Fair Italy
Next Sassuolo, Dionisi: ‘Berardi out, Pinamonti’s goals will arrive. Me at Juve? I do not speak … ‘| A league